With surely a sense of gratification, Prime Minister Imran Khan would have left Washington on July 23, 2019 following the accomplishment of his three-day visit which marked a new era of Pak-US ties with likelihood of witnessing a multi-pronged bilateral cooperation in years to follow.

So far Pakistan-US relations have largely been blanketed, for decades, with main focus on joint military maneuvers, terrorism and the Afghan spectrum; however, now the leadership of the two Countries seem to have intended to explore new avenues of cooperation as well i.e. trade and investment.

“I think we haven’t met the potential of either country,” the US President Donald Trump admitted while mentioning on the Pak-US bilateral relations in his press talk before the resumption of bilateral meetings with Prime Minister Imran Khan and his delegation.

As above mentioned, in the past, most of the visits undertaken by Pakistani leadership to the United States were meant to seek defence and financial assistance for the services Pakistan was supposed to offer in US’s interest. But as stated by Imran Khan himself while speaking at the United States Institute of Peace (USIP) on July 23 that his visit was aimed at to develop a mutual understanding and respect about each other.

“I never asked for any assistance. I asked for understanding. … I hate the idea that we would be asking for funds, not [just from the] US, from anyone. Because … aid has been one of the biggest curses for my country,” Imran Khan remarked on relationship between Pakistan and the United States.

President @realDonaldTrump and the Prime Minister of Pakistan @ImranKhanPTI met at the White House to discuss counterterrorism, defense, energy, and trade. 🇺🇸🇵🇰 pic.twitter.com/TZi4iwpub1

Imran Khan’s above remarks were also reflected by the fact that the US President Donald Trump in his press talk stated to be ‘honoured’ to host a ‘very popular Prime Minister of Pakistan’.

In a sheer contrast to his predecessors or even his own months-old remarks about Pakistan, President Donald Trump didn’t hesitate to eulogize their once non-NATO ally and its people.

“We’re going to have a very great relationship with Pakistan. And we should. It’s a great country. It’s a great — they’re great people. I have many friends from Pakistan.. And they’re (Pakistanis) great people: smart, tough. They are tough. There’s no question about that,” Trump remarked. Even the US president also went on to add in reply to a question that “Pakistan never lies.”

In addition to that, President Donald Trump acknowledged Pakistan’s role in the Afghan peace process, which would also help them extricate from Afghanistan. In response to that, Imran Khan reiterated Pakistan’s all out support to the World especially the US in guaranteeing perpetual peace in Afghanistan. 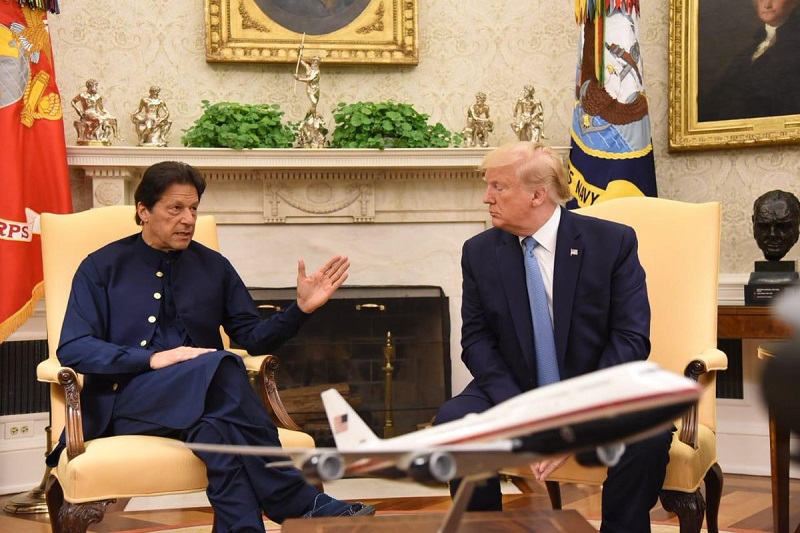 Yet the most significant development for Pakistan was the mediation offer extended by President Donald Trump to resolve the long-standing issue of Kashmir between Pakistan and India. It was Pakistan’s untiring efforts on diplomatic front which eventually made the US leadership realise the gravity of the situation and President Trump went on to say “If I can help, I would love to be a mediator” to resolve the Kashmir dispute, a decades-old desire by Pakistan as its resolution is inevitable for regional peace and prosperity.

“We’ll see if we can do something because I’ve heard so much about Kashmir. Such a beautiful name. It’s supposed to be such a beautiful part of the world. But right now there’s just bombs all over the place,” the US president remarked.

Imran Khan reached the United States via a commercial flight on July 21, and on the same day, he addressed the Pakistani-Americans at Capital Arena in Washington DC that turned out to be one of the biggest ever gatherings addressed by a Pakistani leader.

On July 22, the prime minister held a one-on-one meeting with the US President Donald Trump at The Oval Office in White House followed by delegation level talks. The US president also hosted a luncheon in the prime minister’s honor.

During talks, the two leaders held comprehensive discussions with a focus on building a broad-based and enduring partnership between Pakistan and the US and strengthening their bilateral cooperation to bring peace, stability and economic prosperity in South Asia.

The two leaders reviewed progress of the Afghan peace and reconciliation process. They affirmed their resolve to work together across a broad range of areas.

Both leaders acknowledged the immense opportunity and potential for mutually beneficial collaboration in diverse fields such as trade, investment, energy, economic connectivity, and defense and security cooperation.

Prime Minister Imran Khan invited the US corporate sector to invest in Pakistan.

The prime minister also extended a cordial invitation to the US President Trump for a visit to Pakistan, which he accepted.

The First Lady of the United States Melania Trump expressed happiness on the visit of Prime Minister Imran Khan to the White House, and also shared his pictures with President Donald Trump and herself on Twitter.

Great to have Prime Minister @ImranKhanPTI of Pakistan at the @WhiteHouse today! pic.twitter.com/W4ChxxfwQp

The US President Donald Trump presented a cricket bat to Prime Minister Imran Khan along with a picture of President Eisenhower, the only US President who had witnessed a Test match in Pakistan.

As part of his other engagements in the US, Prime Minister Imran Khan also met the US Secretary of State Mike Pompeo in Washington.

During the meeting with Mike Pompeo, Imran Khan emphasized the need to further enhance and diversify the bilateral content of the relationship in a wide range of areas. He said that Pakistan-US partnership remained vital to the promotion of the mutual interests of the two countries as well as broader regional peace, stability and prosperity.

The prime minister also attended a reception at Capitol Hill, hosted by the Congressional Pakistan Caucus. He was greeted by the Caucus Chair Congresswoman Sheila Jackson Lee.

It’s a pleasure to welcome Prime Minister @ImranKhanPTI of Pakistan to the U.S. Capitol as we meet to discuss the vital ties between our economies, people & nations. https://t.co/ey0OTWGRNz

Imran Khan thanked the Congressmen and Senators for the warm welcome at the Capitol Hill. He said that his government was committed to rebuild the relationship on the basis of mutual trust and mutual respect.

Resolution introduced in the US House of Representatives to Welcome Imran Khan’s maiden visit to US:

The Congresswoman Jackson Lee thanked the prime minister for visiting the Congress and expressed hope that relations between Pakistan and the US could be deepened by enhancing exchanges between the parliamentary representatives of both sides.

The Speaker of the US House of Representatives Nancy Pelosi also saluted the endeavors of Prime Minister Imran Khan for maintaining peace in the region.

The prime minister also attended an event titled “A Conversation with Pakistani Prime Minister Imran Khan” at the United States Institute of Peace (USIP) in Washington.

Great meeting with the PM of Pakistan, Imran Khan. @ImranKhanPTI

In my opinion he and his government represent the best opportunity in decades to have a beneficial strategic relationship the US. This will help us secure Afghanistan and the region long-term. pic.twitter.com/sHN07H5Biv

A delegation of Bower Group Asia led by its Senior US Business Executive also met Imran Khan, whom the prime minister apprised about the investment opportunities in ‘Naya Pakistan’. The prime minister said that the government will provide every possible support to the US investors in Pakistan.

Representing one of the largest Pakistani-American congressional districts in the country, it was an honor to welcome Pakistan Prime Minister @ImranKhanPTI to America. A former cricket star, he was kind enough to sign a bat I bought in #Islamabad. pic.twitter.com/jQIZub2LI5

On the other hand, the Chief of Army Staff (COAS) General Qamar Javed Bajwa who also accompanied the prime minister during his visit to the US, visited Pentagon wherein he was presented guard of honour with 21-gun salute.

In Pentagon, the COAS interacted with the Acting Secretary Defence Mr. Richard Spencer, the Chairman Joint Chief of Staff (CJCS) General Joseph F Dunford and the Chief of Staff of US Army General Mark A Milley.

The COAS also visited the Arlington National Cemetery in Washington to pay homage to US national heroes.

Mati
Mati-Ullah is the Online Editor For DND. He is the real man to handle the team around the Country and get news from them and provide to you instantly.
Share
Facebook
Twitter
Pinterest
WhatsApp
Previous articleFaisal Javed terms Imran Khan’s Washington visit a milestone in history of Pak-US relations
Next articlePTI to accord warmest welcome to PM Imran Khan upon his return from US