ISLAMABAD, Pakistan: The crushing defeat inflicted by the government’s candidates on their rivals Pakistan Democratic Movement’s (PDM) nominees for the top slots of Senate on Friday put a question mark on the future of the already fragile opposition alliance.

The PDM, a group of 11 political parties, was formed on September 20, 2020 on one-point agenda to replace the Imran Khan government as it is nothing with the public issues.

The PDM is a ‘Marriage of Convenience’ because all the allied parties belong to different political ideologies and having nothing in common but they have joined hands since Prime Minister Imran Khan is their sole target to get rid of. 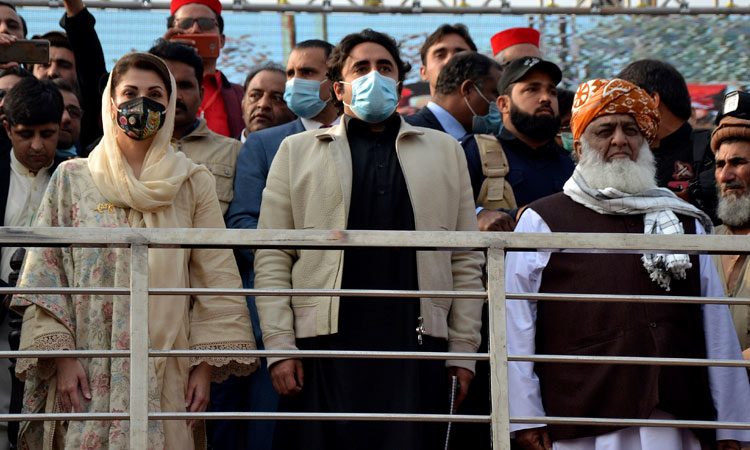 The public is well-aware of the fact that all these parties are gathered under the umbrella of PDM not to fight for their rights but to destabilize the Imran Khan-led Pakistan Tehreek-e-Insaf (PTI) government so as to get concession in the corruption-related cases.

It is evident that all the political partners in the group use the platform for their vested interest rather than presenting any workable solution to the government to ensure public welfare and to ease the suffering of the masses.

The public gave cold shoulders to the PDM’s leadership calls owing to the leadership’s politically-motivated agendas and did not participate in the anti-government rallies despite experiencing skyrocketing inflation, unemployment, and lawlessness.

The leadership of the allied parties tried to veil the differences within the opposition alliance for long but eventually, it has to come to forth following the defeat of PDM-nominated candidates Syed Yousaf Raza Gilani and Maulana Abdul Ghafoor Haideri in the Senate race for the posts of Chairman Senate and Deputy Chairman despite enjoying a clear majority in the House.

During a joint press conference by the opposition leaders, Pakistan People’s Party (PPP) tried to give an impression that PDM parties didn’t stab Gilani in the back rather their votes were unlawfully rejected. However, Pakistan Muslim League-N (PML-N) leader Talal Chaudhry’s short but taunting tweet aimed at the PPP Chairman Bilawal Bhutto Zardari cleared the dust that in PDM all is not well.

Following the defeat, Chaudhry said, in a tweet: “Bilawal sahab! (Mr Bilawal) did you have fun with institutions being neutral?”

Talal’s satirical tweet did not seem an act of his own since he is very close to PML-N Vice President Maryam Nawaz and who apparently was not happy with the repeated statements made by Gilani that establishment is natural. As even the deposed former Prime Minister Nawaz Sharif lashed out at the civil-military top leadership a day before the Senate polls, for what he said, was allegedly threatening Maryam Nawaz.

However, instead of damage control, Bilawal, in a tit-for-tat response, during a press conference, said: “Talal sahab (Mr Talal) this isn’t tanzeem saazi. It is a democratic struggle.”

“Unlike Talal Chaudhry, I am not doing a democratic struggle since 2018, I am in the struggle for the last three generations,” Bilawal said.

The reaction was too direct, sharp, sarcastic, and damaging that it would be next to impossible for the allied partners to bridge the fissure created by the tweeters spates by the two leaders.

Bilawal’s ‘tanzeem saazi’ comment relates to an incident that occurred last year in October when Talal Chaudhry was allegedly beaten by the brothers of a female lawmaker outside her home and was hospitalized after being injured in the mysterious incident in Faisalabad.

Moreover, the role of Awami National Party (ANP) is also quite ambiguous as it fielded its own candidate in the Nowshera by-poll instead of supporting the PDM candidate.

Similarly, the party entered into an alliance with the government-allied party Balochistan Awami Party (BAP) and secured one Senate seat with BAP support.

The role of PML-N in Senate elections looks suspicious because the party leadership was hurt by the defeat of their woman candidate from the Federal Capital when Syed Yousaf Raza Gilani won the Senate seat.

So the fissure within the PDM is getting wider with each passing day mainly due to rising mistrust and self-centered political approach. Therefore, the coming few weeks are of paramount importance which will decide the future of the opposition alliance.

It seems noticeable that the opposition ‘Marriage of Convenience’ will not last long and instead of marching towards Islamabad, the PDM leadership will most likely be indulged in the blame-game and mudslinging on one another for the alleged deceits in Senate polls, which will eventually lead to the fall of the alliance.