ISLAMABAD, Pakistan: The National Commission on Status of Women (NCSW) organized a consultative meeting on women’s effective participation in the political process in Islamabad on Monday. 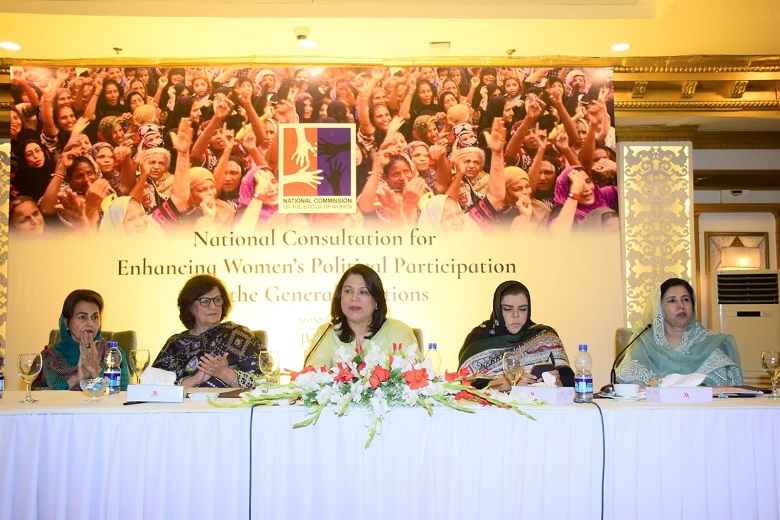 While addressing the inaugural session,  the Chairperson NCSW Nilofar Bakhtiar stated that women have been considered as a passive vote bank  and political parties tend to use them mostly for representative functions at public gathering, meetings and campaigns although political parties have women wings these tend to fulfill largely representative functions and have not influence the decision making process within political parties so structural discrimination in party organizations has influenced women’s representation when it comes to the contestation elections. The note worthy representation of women in legislative bodies is mainly due to the quota system as they are not elected directly by the people but rather are allocated their seats by the party apparatus which means they are not true representative of the socio- cultural class of the majority women of Pakistan. This is significant indication for the de-facto lack of women empowerment in political parties.

She said the NCSW is committed to ensure women’s participation in the upcoming election effectively.

The Commission is taking all possible steps and this consultative meeting is part of our efforts to improve women’s participation in the upcoming General Elections.She further said that whenever there is any problem in the country, the agenda of women always goes backwards. She pointed out that although women have been given the right of vote but not the power in decision making, particularly in the political process.

Nighat further said that due to the difficulties faced by women in Balochistan and Khyber-Pakhtunkhwa, training officers were being trained keeping in view the cultural requirements so as to ensure maximum political participation of women.

Speaking on the occasion, the NADRA’s Spokesperson Ms Moazzama Yousaf said that NADRA is a resourceful institution and 90 % of the centers set up by it have female staff to facilitate female in registration process.

She also added that NADRA and the Election Commission have jointly launched several campaigns for the registration of women and have so far registered 1,500,000 (1.5 million) women for the recent elections and are also campaigning for people with disabilities in which a large number of women with disabilities are being registered, she further informed. that 2,900 transgenders were registered with NADRA so far.

Addressing the meeting, women rights activist Farzana Bari said that NADRA has done a lot to close the gender gap of voters but they have to speed up the work otherwise it would take 25 years for 10 million women of voting age to register. She further said that according to the last census, the number of transgender people is 10, 418 while NADRA has so far registered only 2900.

It is imperative that the process of registration of women, transgender and persons with disabilities be expedited as soon as possible and it is decided that if the number of women voters in any polling station is less than 10% then the election result will be declared null and void.

The UN Women Representative Hassan Hakeem said that women should be included in the political process as well as in important forums in democratic institutions such as parliamentary committees and other decisions making institutions. He stressed to ensure women participation in budget and other such decisions processes.

In the last session, the participants of the consultative meeting gave their recommendations on effective participation of women in the electoral process as follows:

The Commission will take up these recommendations with the concerned stakeholders for consideration and implementation.