The Prevention of Child Abuse Campaign 2021 comes at an important time because abuse and violence against children continue to be growing concerns in Pakistan – particularly compounded by the COVID-19 pandemic. Although other forms of abuse and violence exist, the Campaign aims to educate, equip, and empower children, parents, caregivers, and society about child sexual abuse. 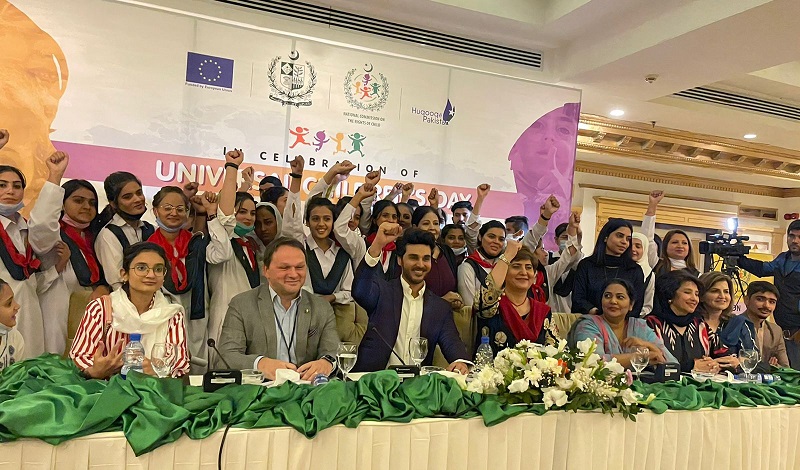 Speaking at the launch, the Chairperson NCRC Afshan Tehseen, said, “Ensuring child rights is particularly important because Pakistan has a unique window of opportunity where the ‘youth bulge’ can truly drive Pakistan’s future. But the worrying child abuse crisis is unfolding right before our eyes. The time to act is now – through strengthening child rights protection systems and legislations along with mass civic awareness-raising efforts.” She reiterated that the NCRC is strongly committed to ensuring that child abuse cases are resolved swiftly and with the full force of justice.

The Head of Cooperation of the Delegation of European Union to Pakistan Ovidiu Mic, speaking on the occasion of the launch, reiterated that “children are the future of our societies and their rights must be upheld, violations denounced and punished. In Pakistan, the European Union is actively supporting initiatives to prevent child abuse in all its forms and to promote awareness of the risks that it poses.”

Ovidiu Mic then praised this initiative and highlighted its significance to raise awareness on the subject and create opportunities for discussion.

The guest-of-honor and goodwill ambassador Ahsan Khan spoke about his involvement with the Campaign: “We need to act now! Pakistan’s biggest resource is its young population, especially children. They will be tomorrow’s leaders, politicians, doctors, policymakers, actors and artists. For them to imagine a better world than ours, we need to ensure that we give them a better world to dream in where they can be safe, secure, and loved.”

The Prevention of Child Abuse Campaign 2021 launched in the lead-up to Universal Children’s Day – celebrated on November 20. The day renews a global annual commitment to center children and young people’s voices to address their unique challenges and make decisions for their better future by fulfilling their due rights.

The Universal Children’s Day also marks the adoption of the United Nations Convention on the Rights of Child on 20 November 1989. Pakistan was the sixth country to ratify the Convention the following year.

Along with the Campaign, the NCRC is running several awareness-raising activities with children and a digital media campaign throughout the week.

In keeping with Pakistan’s commitment to the Convention, the NCRC was established in February 2020 under the National Commission for the Rights of Child Act, 2017. The Commission has an overarching advisory mandate for the promotion, protection, and fulfillment of child rights.

Top 10 Pictures of Merub Ali that highlight her versatile personality