ISLAMABAD, Pakistan: The National Commission on the Rights of Child (NCRC) on Monday launched its first seminal Policy Brief on Forced Conversions – signaling the Commission and the Government of Pakistan’s commitment to delivering child rights including protection of minors from minority and marginalized groups.

The NCRC’s Policy Brief on Forced Conversions with Recommendations After Analysis of the Arzoo Case touches upon the gaps in existing laws.

The brief also puts forward recommendations for specific interventions by various stakeholders to curb incidents of forced conversions in light of the rights of minors and religious minorities. 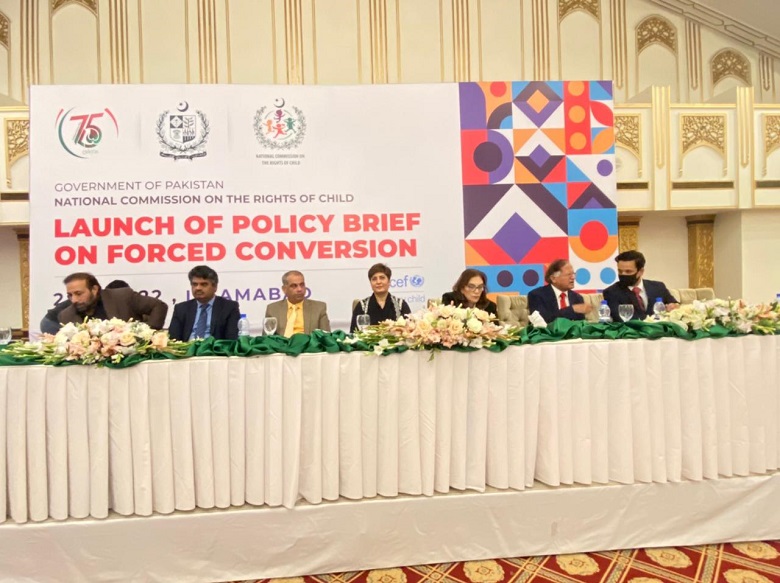 Constituted in February 2020 under the National Commission on the Rights of Child Act 2017, the NCRC has been instrumental in advancing child rights and protection since its inception. The Commission is committed to delivering its mandate – examining and reviewing laws and policies, inquiring into child rights violations, contributing to awareness and advocacy initiatives, and researching policy matters related to child rights.

Underscoring the importance of this research, the Chairperson NCRC Afshan Tehseen Bajwa said, “The purpose of this policy brief on forced conversion is to not only bring attention to the scale of the issue but also highlight that the State, relevant authorities, federal and provincial governments have the responsibility to protect from organizations and persons trying to coerce/exploit vulnerable minors. In addition, the State also has the responsibility to provide unbiased and complete access to law and justice resources in cases of abduction and forced conversions.”

It is important to note that Pakistan has ratified the United Nations Child Rights Convention, of which Article 14 (1) states that state parties need to respect the right of children to freedom of thought, conscience, and religion. Pakistan is a signatory to the Universal Declaration of Human Rights, which states that “the right to freedom of religion includes the right to change one’s religion and that no one shall be subject to coercion to change their religion.” Pakistan has also signed and ratified the International Covenant on Civil and Political Rights and ratified the Convention on the Elimination of Discrimination Against Women (CEDAW), of which Article 16 confirms the right of every woman to enter into marriage “only with their free and full consent.”

The Member Sindh NCRC Iqbal Detho emphasized that the issue of forced conversions is faced by all religious minorities in Pakistan. He emphasized Pakistan’s numerous positive obligations to ensure that Covenant rights are protected by the State.

Iqbal Detho outlined the issues related to lack of access to justice and presented the Commission’s recommendations – including, the role of government and legislative bodies; engagement with law enforcement agencies and judicial bodies; mandates of national and provincial human rights institutes; and, the partnership with civil society and media for awareness-raising.

Echoing similar sentiments, journalist and activist Ahmed Quraishi said, “Forced conversions violate multiple Pakistani laws and international conventions, from rights of child to human rights, human dignity, and freedom of belief. National Commission on the Rights of Child under the leadership of Afshan Tehseen Bajwa and her team have shown courage and tenacity in producing a policy guideline on forced conversions. This will help strengthen state and national narrative on this abhorrent practice. We have a long way to go, but this is a step forward.”

Minority inclusion also entails religious freedom so that marginalized groups are not pressured to give up their unique identities and beliefs. Delivering minority rights is directly related to child rights and child protection where minors of religious minorities are safe. Ensuring minority protection and preserving minority identity creates a tolerant social and judicial environment, governance, and frameworks, leading to a just society where human rights, child rights, and minority rights are protected. 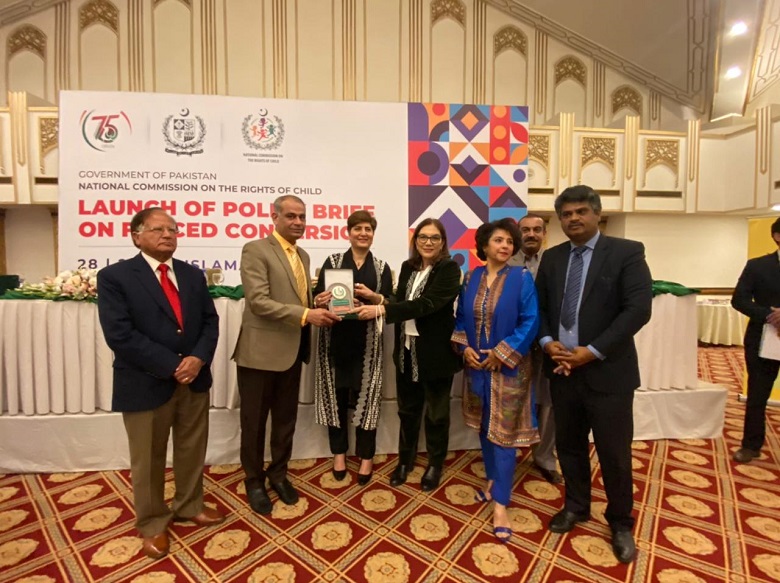 They were of the view that it is imperative to build a critical mass of parliamentarians engaged in Freedom of Religion and Belief issues, apprise them of ongoing policy research, and build their capacity to ensure effective protection of minority and child rights by legislative and political influence.

The Federal Minister for Information and Broadcasting Fawad Chaudhry highlighted the vital role media – especially social media – can play to help build grassroots awareness on the issue, “The role of media and social media is also civic education and awareness-raising – these efforts can go a long way in creating interfaith harmony and tackling human rights, child rights, and minority abuses.”

The Commission recommended stronger policy frameworks and increased access to law and justice in accordance with international commitments and the Constitution of Pakistan 1973.

To achieve these, the NCRC asked the media personnel, government, and all the relevant stakeholders to recommit themselves to serve and deliver basic human dignity extending to all minorities and children in Pakistan.