ISLAMABAD, Pakistan: The National Commission for Human Rights (NCHR), in collaboration with the Taskeen Health Initiative (Taskeen) and with the support of the United Nations Population Fund (UNFPA), has launched a report on mental health and human rights.

The aim of this report is to identify the gaps in mental health policy, legislation, licensing, qualification, and ethical mental health service delivery in order to highlight the human rights violations and malpractice that those with mental health issues face as a consequence.

While presenting the report findings to the audience, the Chairperson NCHR Rabiya Javeri Agha highlighted the need for discourse stating, “we need to move past the stigma and taboo around the subject of mental health and talk about these issues openly and without discrimination.” 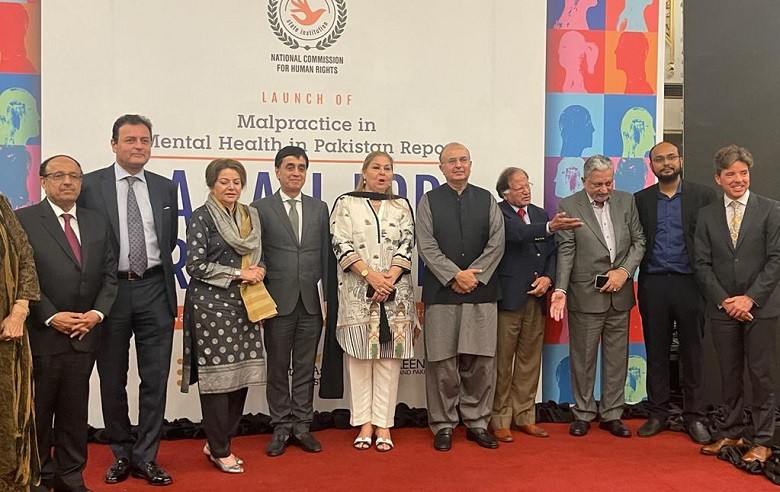 Rabiya Javeri also emphasised how “limited regulation of the mental health sphere means that anyone can offer mental health counselling and treatment without accountability, which can lead to incidents of human rights abuses and exploitation of vulnerable populations. Regulation and promotion of ethical mental health services are imperative.”

The UNFPA Country Representative a.i. Dr. Bakhtior Kadirov added to the conversation stressing the need for coordinated care delivery saying, “I would like to highlight the centrality of the mental health and psychosocial support services in GBV prevention and response programmes, considering the needs and concerns of GBV survivors”.

While there is a paucity of local research, estimates show that approximately 1 in 4 Pakistanis over the age of 18 will be affected by a mental health condition at some point in their lives, of which over 80% will not be able to access mental health support. In reality, this number is likely under-reported because of the stigma attached to mental health disorders preventing seeking help and the lack of mental health awareness among the masses.

In addition, this burden of mental illnesses prevents those affected from achieving their full potential, reduces their productivity, and prevents them from being effectively employed. The economic ramifications of this have been estimated to cost the national exchequer US$ 6.2 billion.

The report details evidence-based policy recommendations across five major themes, including raising public awareness; legislative actions; mental health licensing bodies; mental health regulatory authorities; and other recommendations. These recommendations have been developed in consultation with experts in the fields of psychiatry, psychology, health policy, and public health. They are centred around end-user concerns and experiences in order to ensure the highest quality of care for vulnerable people. This report was reviewed and validated by stakeholders in the mental health field and those with lived experience.

There was bipartisan support for the recommendations of the report from the Chairman of the Standing Committee on Human Rights, Senator Walid Iqbal, and from Member of the National Assembly Ms. Shaista Pervaiz. Justice Mansoor Ali Shah, of the Supreme Court of Pakistan, concluded the evening with his keynote address, in which he stressed a rights-based approach to mental health. He cited the right to health as akin to the right to life guaranteed within the Constitution of Pakistan to protect the most vulnerable populations. He further stressed the inviolable dignity of man under Article 14 as a non-negotiable, fundamental human right.

The Chairperson NCHR Rabiya Javeri Agha also announced the formulation of a draft Mental Health Bill, which would serve to update the Mental Health Ordinance, 2001 in the Islamabad Capital Territory (ICT) and serve as a model for updating the provincial mental health Acts.

“It is time for Pakistan to realise that invisible disabilities, such as mental health, are one the most neglected yet essential issues for development and human rights in the country”, she said.

Mati
Mati-Ullah is the Online Editor For DND. He is the real man to handle the team around the Country and get news from them and provide to you instantly.
Share
Facebook
Twitter
Pinterest
WhatsApp
Previous articleRado Watches Price In Pakistan | 5 Best Watches to Buy
Next articleTop 5 Controversial Dramas In Pakistan 2022