The report is aimed at highlighting the discrimination against minorities especially with reference to government job advertisements and the treatment of sanitary workers.

The event featured presentation of report findings, screening of a documentary on the condition of sanitary workers and panel discussion on “Ending systemic discrimination against minorities.”

The event also announced the launch of five short films on minority rights by the NCHR in collaboration with Sharmeen Obaid Chinoy (SOS) Films. Pakistan Partnership Initiatives (PPI) also partnered with the Commission to organize the event.

The report shows that nearly half of the posts reserved for minorities lie vacant. Even within the posts that are filled, 80 percent of non-Muslims are employed in low-paid work from BPS 01 to BPS 04.

It also highlights the hazardous working conditions, insufficient safety gear and equipment, lack of job security, low compensation for cases of hurt and death and the recounting of heart breaking stories of non-Muslim sanitary workers who have faced societal ostracisation, stigma, discrimination and death in the deadly manholes that they sought to unclog.

In order to rectify the situation, the Commission recommended ensuring the protection of sanitary workers ranging from replacing manual unclogging of gutters with machine unclogging to ensuring fair wages, social security and healthcare for workers.

It also suggested ending discrimination against minorities in the employment quota, immediate ban on practice of publishing discriminatory advertisements and ensuring public transparency in the number of minority posts filled across each basic pay scale. 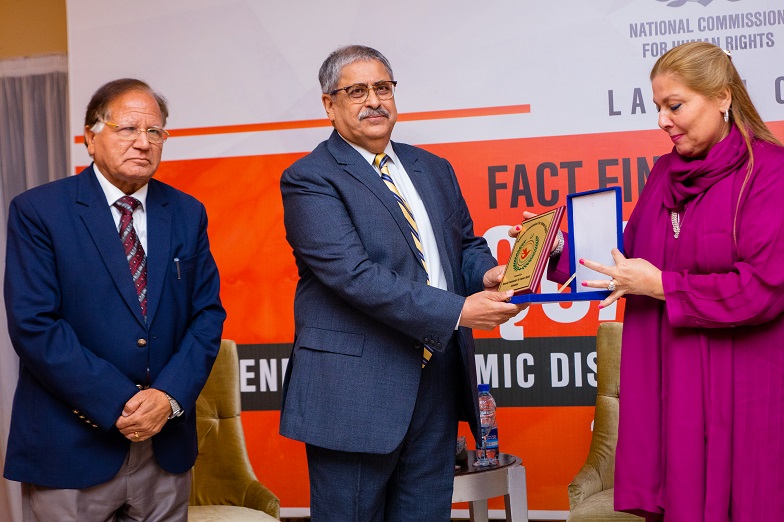 The Chairperson NCHR Rabiya Javeri Agha briefed the participants on findings of the report. She said following the nationwide consultations with civil society and minority groups, several important human rights violations were repeatedly brought to the notice of the Commission

“Paramount to those were concerns regarding the inhuman and unconstitutional procedures in hiring of non-Muslims for low paid sanitary positions, despite constitutional and legal safeguards. Selection of sweepers and sanitary workers in government departments are done through discriminatory advertisements,” she said adding that within the course of a few days, the NCHR was able to secure more than 300 such discriminatory advertisements.

The Chairperson said that as a result of NCHR’s efforts, federal and provincial Governments have committed in writing to not only look into the issue of discriminatory practices but to affirm and vigorously uphold the Constitutional safeguards for minority citizens.

In his introductory remarks, the Member NCHR Manzoor Masih said that to curb religious discrimination, it is integral to ensure the participation of minorities in all aspects of political, economic, social and cultural life in Pakistan.

“Discriminatory advertisements are against the concept of equal rights enshrined in the constitution and hurt the sentiments of a community that has actively contributed in the development of Pakistan,” Manzoor Masih said.

The Chief Guest Federal Minister for Human Rights (MoHR) Riaz Hussain Pirzada said that discrimination against minorities is one of the foremost human rights issues that MoHR is committed to addressing.

“On the basis of the letter sent by NCHR, MoHR took immediate action and issued a letter to the Chief Secretaries of each province, directing them to ensure the protection of minority rights in line with international obligations and constitutional guarantees,” Riaz Hussain Pirzada said.

In his keynote address, the Chief Justice Islamabad High Court (IHC) Justice Ather Minallah said that his three ideal judges from Pakistan’s judiciary are from minority. He said that conferences and court judgments are not enough unless a proactive role is played by the government, civil society and media.

The Chief Justice IHC said that it is the obligation of the state to encourage, cultivate and promote diversity.

“Human rights violations occur because of the abuse of rule of law. Under constitution, every citizen is equal. Still we have the term “ordinary citizen” commonly used,” he said.

) Justice Ather Minallah said that every year, President of Pakistan is obligated to submit a report on the status of implementation of “Principles of Policy” of the constitution which ensures basic human rights.

“Regrettably, this constitutional obligation has never been fulfilled by any president or the governor,” he added.

The Federal Minister for Poverty Alleviation and Social Safety Shazia Marri stressed for sensitization of relevant government departments on unconscious biases that lead to discrimination against minorities.

Shazia Marri condemned all the discriminatory and said that the condemnation shall come loud and clear from all segments of the society.

Mati
Mati-Ullah is the Online Editor For DND. He is the real man to handle the team around the Country and get news from them and provide to you instantly.
Share
Facebook
Twitter
Pinterest
WhatsApp
Previous articleState Bank of Pakistan raises policy rate to 13.75%
Next articleHina Rabbani Khar participates in WEF event on “Afghanistan: The Path Forward”