ISLAMABAD, Pakistan: A ‘National Voters Day’ was observed throughout the Country on Thursday to create awareness in public about the importance of vote and voters.

The main National Voters Day ceremony was held at the Aiwan-e-Sadr in Islamabad in which President Mamnoon Hussain was the chief guest. The Chief Election Commissioner (CEC) Justice Sardar Muhammad Raza also attended the event.

Speaking at a seminar on “National Voters Day seminar: Parliament and Women’s Right to Vote” Minister for Information, Broadcasting, National History and Literary Heritage Marriyum Aurangzeb said that casting vote was a national responsibility and all adults especially youth which constituted over 60 per cent of the population should exercise their right of vote in next year’s elections to strengthen democratic institutions in the Country. 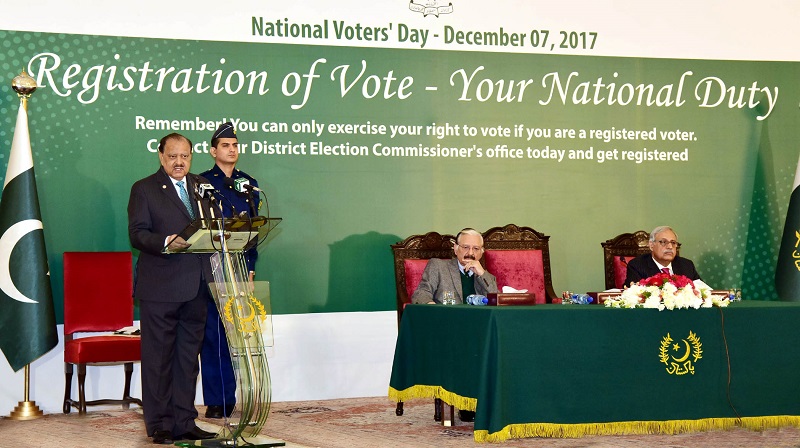 While addressing the main ceremony, the CEC Justice Sardar Muhammad Raza said that after necessary legislation, the delimitation of constituencies would be completed before the next general elections.

The CEC said that the Election Commission of Pakistan (ECP) had been inviting the attention of the government to this issue in order to complete new delimitation on time.

Justice Sardar Muhammad Raza said that the Election Commission would print the ballot papers on watermark paper in the next election to bring further transparency in the electoral process and the arrangements were being made in this regard.

The Chief Election Commissioner said that in addition to men, the ECP had also made arrangements for women and disabled persons to ensure their participation in the election process.

Speaker National Assembly Sardar Ayaz Sadiq the occasion congratulated over 97 million currently registered voters of Country and many more that are going to be added in the due course on the eve of 2nd National Voters Day.

Ayaz Sadiq said that Commemoration of National Voters Day not just highlights the significance and power of vote but also served as a reminder for creating awareness among the people of the Country to ensure their maximum participation in the electoral processes.

At provincial level ceremonies were held at Governor Houses, in which provincial election commissioners and other officials attended the events.

Rallies were organized at district level to mark the day and create awareness in public about the importance of vote and voters.

Representatives of media, civil society and women organizations attended these activities. During these events, people were informed about the importance of vote and registering them as voters.

Similarly, Country’s people particularly women were asked to come forward and register them as voters.

Mati
Mati-Ullah is the Online Editor For DND. He is the real man to handle the team around the Country and get news from them and provide to you instantly.
Share
Facebook
Twitter
Pinterest
WhatsApp
Previous articlePakistan to launch 5G technology soon
Next articlePakistan lawmakers condemns US decision to recognize Jerusalem as Israel’s Capital