Dramatic music, magic night, hundreds of objects – welcome to the Kings of the Sun exhibition! In an exceptional international integrational project that documents the greatest archaeological discoveries of Czech Egyptologists connected with the research of the Egyptian Abusir, an ancient royal burial ground adjacent to Giza in the north and Sakkara in the south. 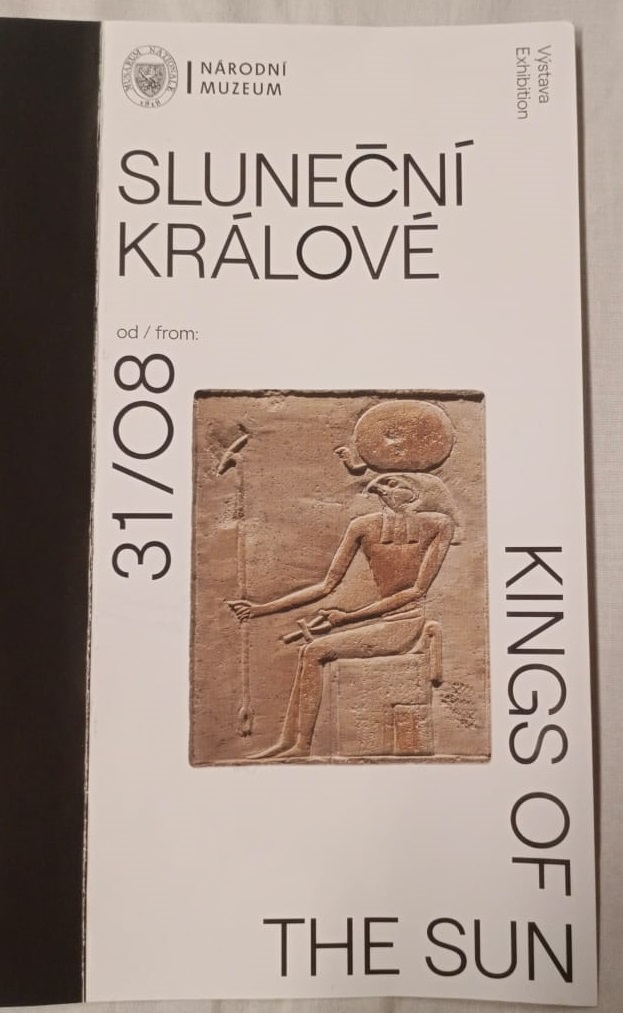 Take the unique opportunity to see generous loans from the Egyptian Museum in Cairo, the Great Egyptian Museum in Giza, but also from museums in Berlin, Leipzig, Hanover, Heidelberg, Hildesheim, and Frankfurt and Main. Last but not the least, you will see objects that the National Museum acquired as a Czechoslovak contribution to the finding made by the expedition of Charles University in Abusir. There are treasures from the 3rd to the 1st millennium BC, such as the unique royal statue of King Raneferef, one of the four pharaohs buried in Abusir, or an extensive collection of statues from the tombs of Princess Sheretnebty and the scribe Nefer. 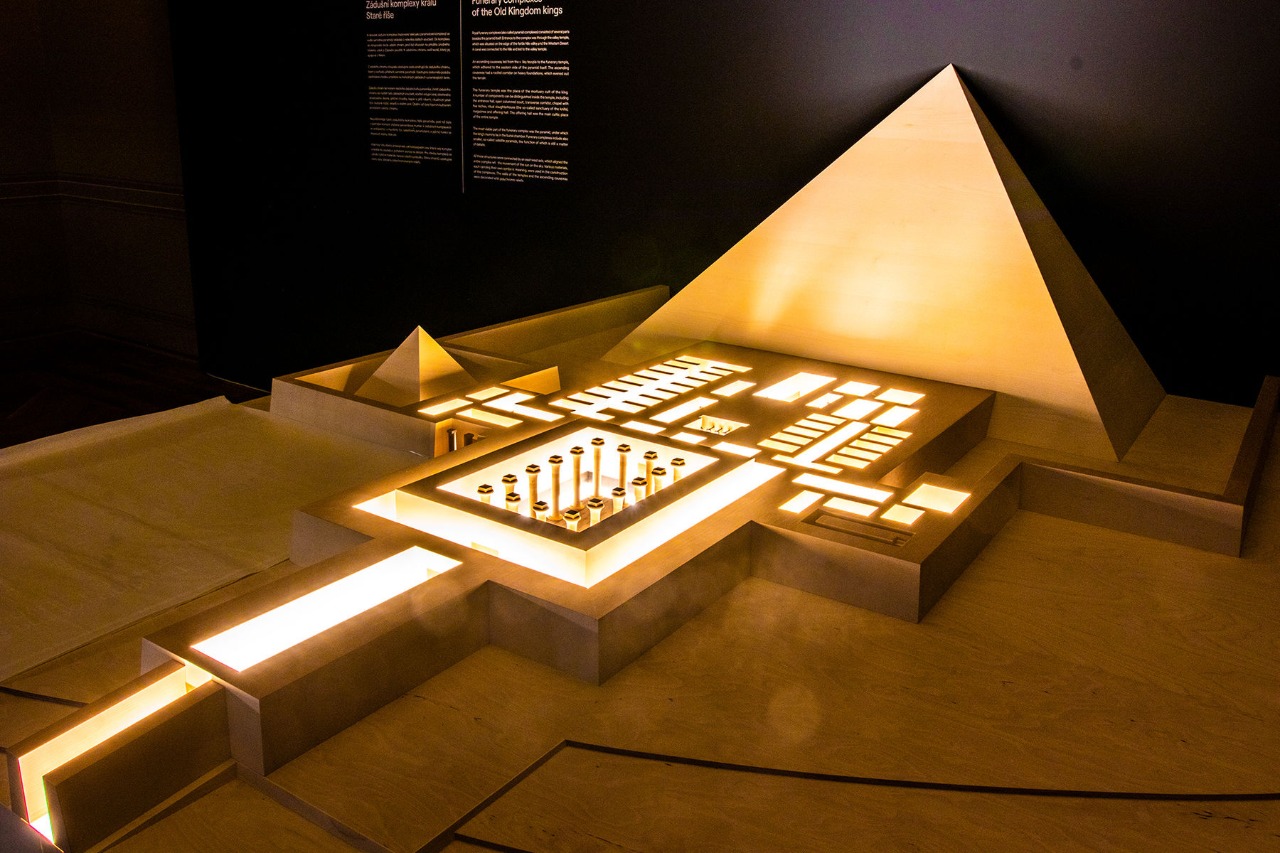 As a student of Semiotics and Philosophy of Communication, I took the very first available opportunity to see the claimed uniqueness of the Exhibition. Czech methods of communication are no doubt unique because they keep human cognition in mind during each step of the process and follow strict semiotic rules in transmitting the prescribed message. The exhibition Kings of the Sun is being exhibited in Narodni Muzem, Vaclavskey namesti 68, 110 00 Praha 1, also known by foreigners as the Museum Complex of the National Museum. 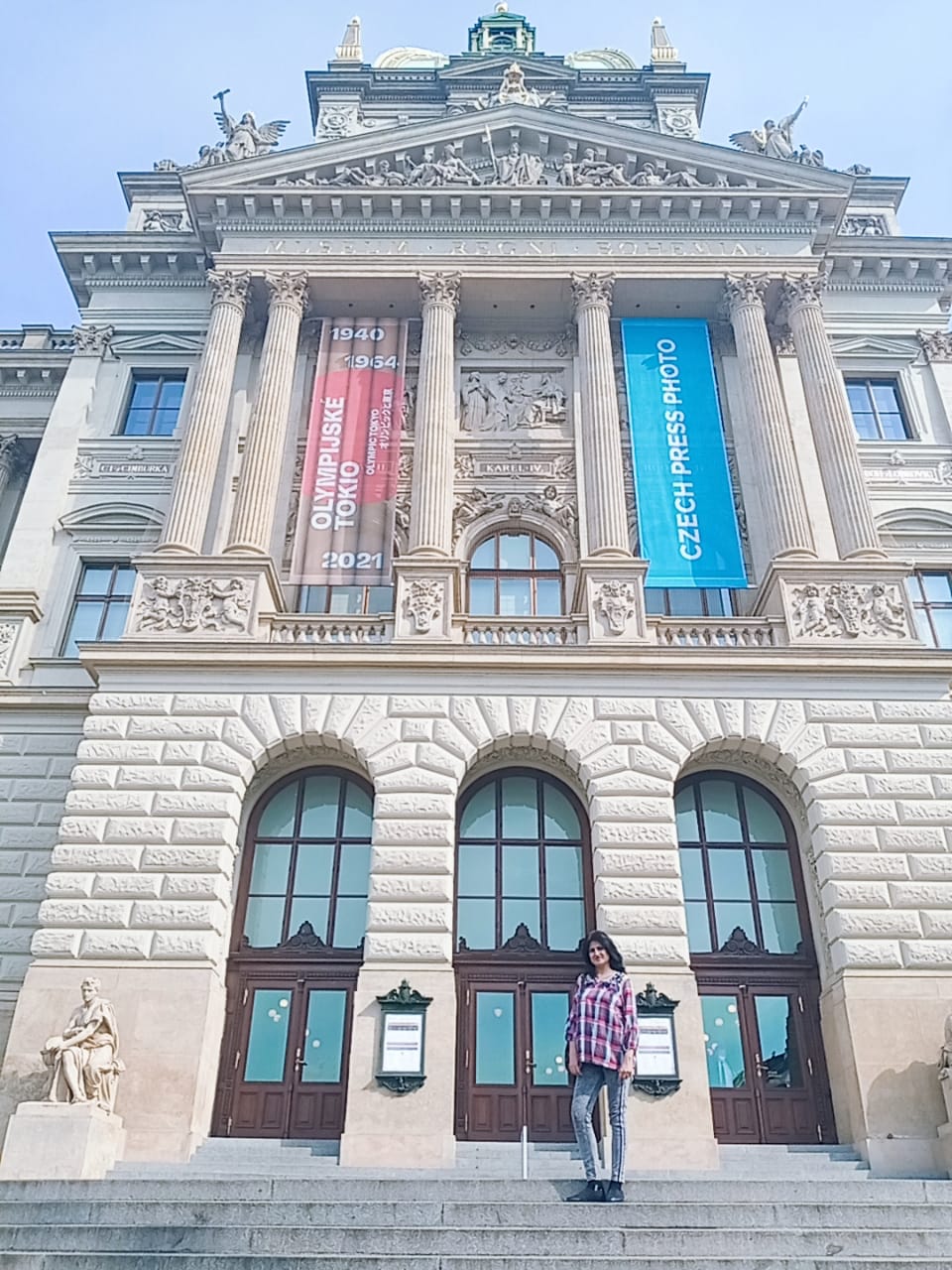 The exhibition comprises relics of ancient Egypt excavated from a joint venture of Charles university’s Egyptology department and the Egyptian Abusir Research Team. It was a first-ever exhibition where historical content was being landed by, on that stature. My quest of how these historical discoveries are being displayed or communicated met an unconventional form of display, where objects are not just put in isolation, dumb and deaf, lonely and desperate, facing a Fourth Wall between their audience. On the contrary, in the exhibition of “Kings of the Sun”, they were alive and integrating into their viewers. Their display created an ambiance of life among death, a maze-like structure giving a surprising interaction on each turning point. 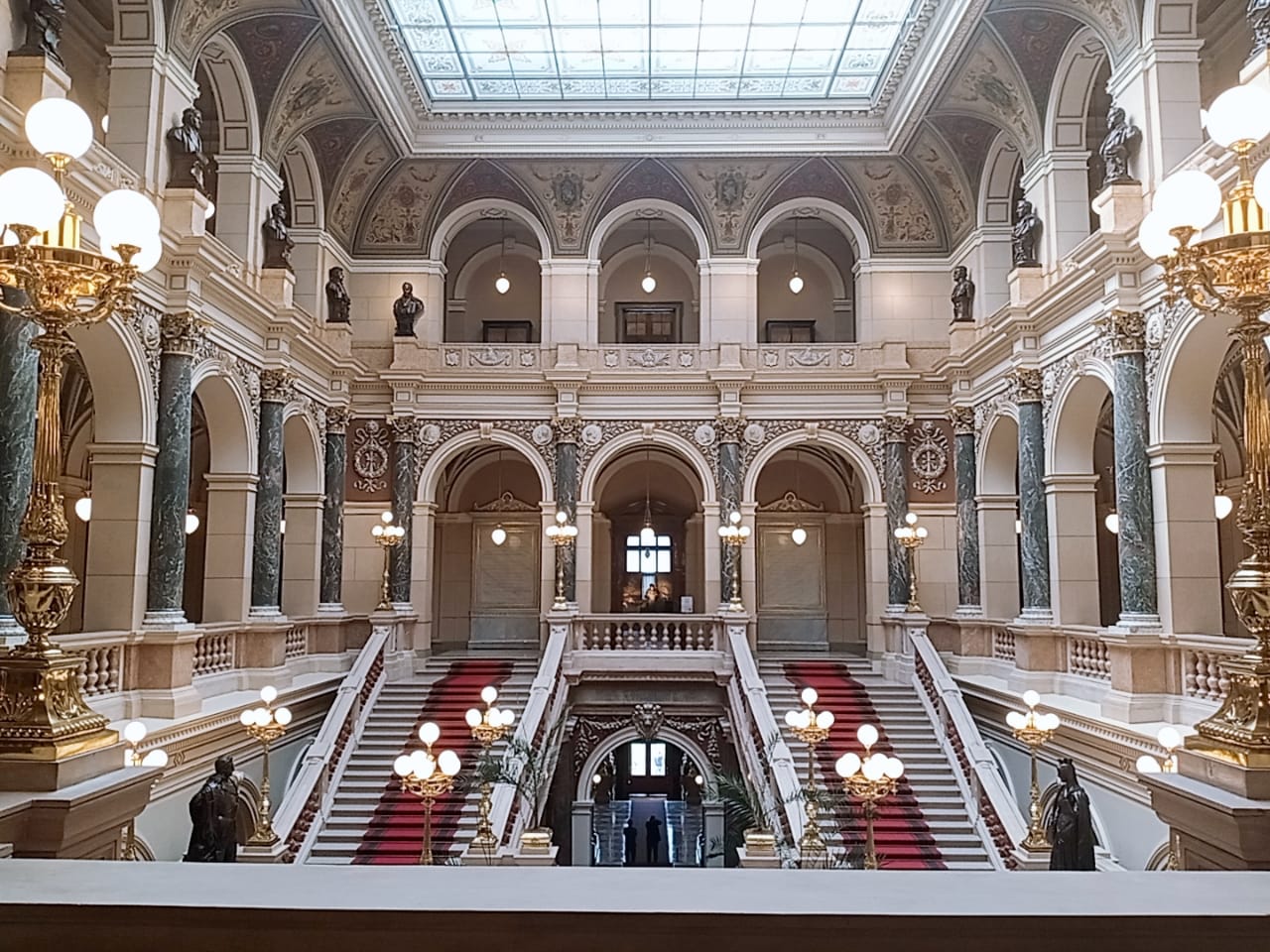 The theme of black and white was creating maximum perceptiveness for the displays and was helpful in undivided attention. Pitch black ground and a lit figure were no doubt from one of the Gestalt aesthetic principles. Dealing with human attention mechanism the figure-ground principle was being exploited at maximum. There were instances when the figure was presented as a center of the periphery and few other situations were presented ground as a center point and figure just to create the point of reference. The labyrinth theme was successful in maintaining attention span by not revealing all at once and by not giving much information to process. Information was provided one after another juxtaposed as Mise-en-scène, flowing and taking the viewer soothingly aligned with the movement.

While viewers indulge in traveling through history, another Cognitive Aesthetic principle was tactfully used. The principle of Peak Shift deliberately used to take a sudden shift from silent communication to active communication by adding simulation such as a conversation between a pharaoh queen and a researcher. The stone statue was communicating on a screen with computational lip sinking and gesturing while the researcher was engaging her in an informative and curiosity-based discussion. The display area for that was flawless white to minimize attention by giving a sense of nothing other than the point of attention. The ruins of past communicating not metaphorically but literally, tangibly perceivable by senses could no doubt only be done by Czechs. They know how to exploit the very idea of semiotics referent and reference to its maximum. 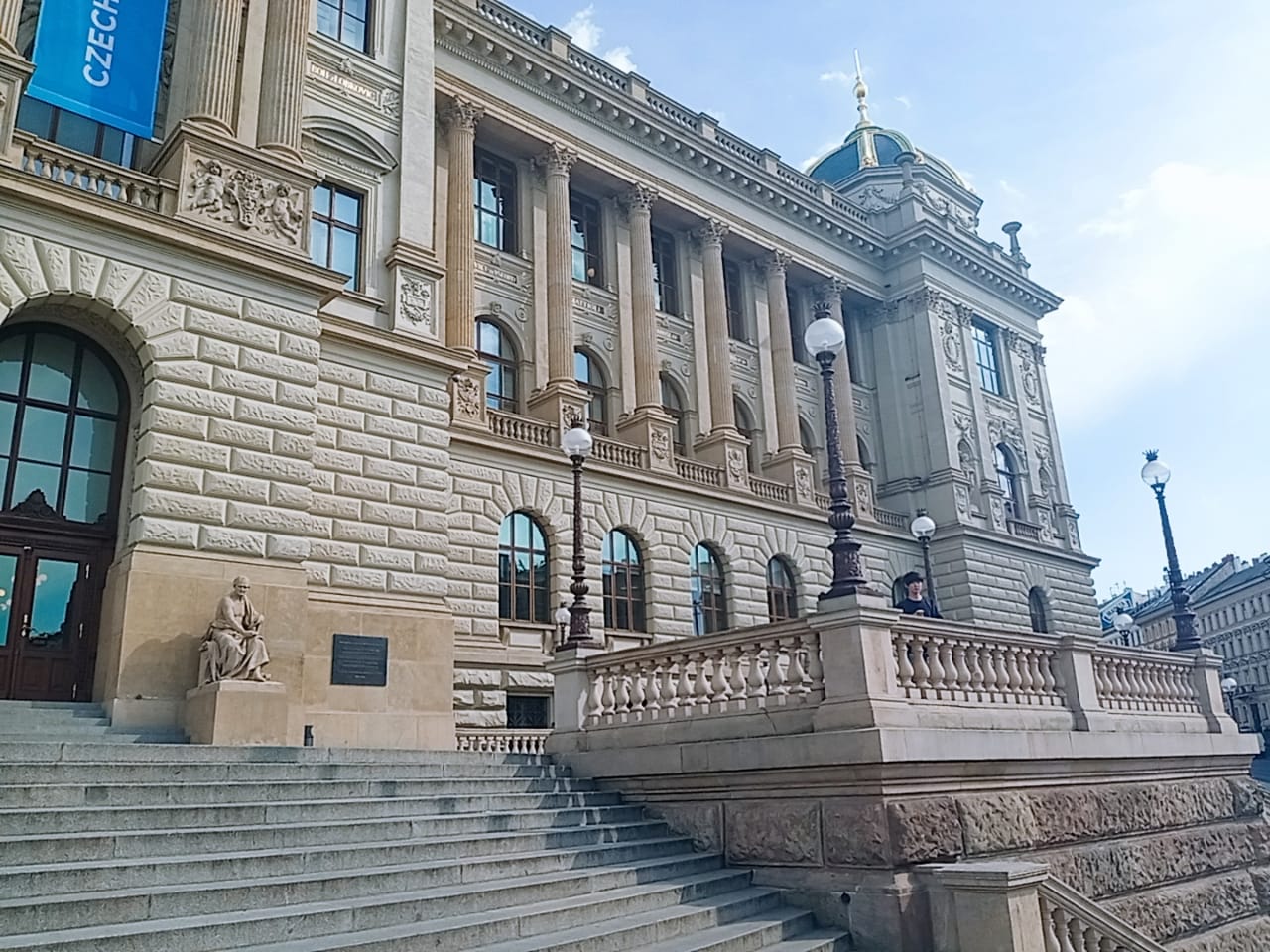 It is unconventional for such type remnants to display to integrate and intercept with the human brain especially when the object is out of context and out of proportion, it would have been been a different experience on the backdrop of the actual place where the objects placed in proximity with other relative elements but objects displacement from Cairo to Prague were bridged tactfully. A window in a shop on display and a window in the wall in a house can make a huge difference, to minimize displacement effect installations were used as a supplement, a replica of the valley of the kings lit from the bottom-up and a huge installation of visual imagery through illusion were my aww moments. One of the tomb entrances was assimilated and a theatrical display of light and shadows was projected to create time-traveling. As ruined decayed wall and main entrance were standing right in my way a flood of color pixels rained from my back, moving on the walls and ceiling and clinging to the point of reference in this case; the assimilated wall. Meanwhile, shadows of Pharaoh’s funeral are simultaneously moving from point A to point B. The span of approximately ten minutes’ drizzle of hue gave all the lost colors leading all the vibrant scriptures to emerged. A constant feeling of rebirth or reemergence creates a trance in which I  noticed that the shadow of the funeral is no more passing by. This illusionary transition from now to then was a masterpiece.

When I was coming out of the museum, I felt that it was not a mere visit to a museum for me rather it was a journey through history. A journey that showed me the professionalism of Czech to preserve, exhibit, and present past in present. It was not a journey only to Egyptian civilization thousands of miles away from the burning deserts of Pyramids rather a journey also through the beginnings of the National Museum.

The National Museum Prague was founded in 1818 and it houses nearly 14 million items from the areas of natural history, history, arts, music, and librarianship, which are located in dozens of museum buildings. The main building of the National Museum has been renovated in 2011-2019.

Whosoever is planning to visit Prague, must spare at least one day to travel through history by visiting this exceptional grandeur and artfully managed National Museum of Prague.