This Online Video Conference was the first event of its kind held in Pakistan since the outbreak of Coronavirus crises which focused on ‘Confronting Coronavirus: Pakistan China relations, CPEC, and impact on global order’. 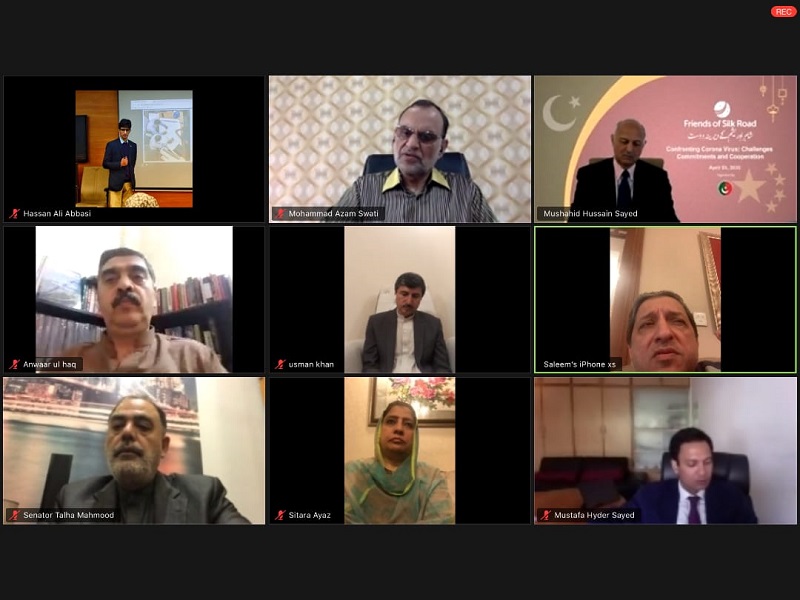 The participants were also given a presentation by the Executive Director Pakistan-China Institute, Mustafa Hyder Sayed giving details about the assistance provided by Pakistan to China and China to Pakistan during this crisis.

According to the fact sheet, Pakistan sent a special transport plane to China on February 1, 2020 sending valuable medical supplies including masks, at the time when there was a big shortage of such masks in China. On February 10, 2020 Senator Mushahid Hussain sponsored a resolution in the Pakistan Senate, which was unanimously passed, expressing solidarity with China and a few days later a similar resolution has been passed by the National Assembly of Pakistan and the Pakistan parliament was the first parliament to express such solidarity with China on the coronavirus crisis. Pakistan is one of the few countries not to evacuate its nationals out of China, including the students at Wuhan which showed Pakistan’s confidence and trust in China’s ability to take care of our nationals “as their own”.


On March 16-17, President Alvi specially flew to China to express Pakistani Nation’s solidarity with China, a gesture which was appreciated by President Xi Jinping and entire Chinese people.

In his opening remarks, the host, Senator Mushahid Hussain said that the coronavirus crisis had strengthened the Pakistan-China Friendship and solidarity because like other previous crises China again had stood by Pakistan firmly like a rock.

Talking about the impact of the crises of global order he said that Asian countries like China, South Korea, and Singapore have shown quality leadership as well as the efficiency of their medical and healthcare system as opposed to Western countries and in this regard, China has shown leadership during this global pandemic, as the Chinese doctors are working in Asian Countries like Pakistan as well as European countries like Italy and Spain.

Senator Mushahid Hussain welcomed the announcement by the Prime Minister yesterday that the CPEC projects will be restarted on top priority because he said that CPEC like Kashmir issue & the nuclear program enjoys national consensus above party lines as CPEC is the guarantor of the progress and prosperity of the people of Pakistan.

Senator Mushahid Hussain also demanded that the government should also announce the National Health Emergency to cope with the crisis so that all resources and institutions are utilized for this one-point agenda.

Senator Saleem Mandviwalla said that while the government has been a little slow in responding as we were “unprepared”, he referred to the fact that at his own initiative 2000 testing kits were imported early on. He hoped that big business groups from the private sector would come forward to play their role.

Senator Sitara Ayaz underlined the need for creating more awareness about the coronavirus since this was lacking, and she said that the situation in provinces was ‘pretty bad’ and there was a need to ensure food supplies for the needy and the poor. She also expressed gratitude for China’s support to Pakistan for combating coronavirus.

Senator Usman Kakar started his remarks by paying tribute to Dr. Osama, the first shaheed of Coronavirus, the doctor of Gilgit Baltistan who died in the line of duty and he especially focused on the needs of his province, Balochistan where he said 71% people are living below the poverty line.  He also appreciated the role of Chief Minister Sindh in tackling the crisis. He said that “China has done wonders” and he urged China to specially earmark medical assistance for coronavirus to different parts of Balochistan, especially the less developed areas. He also called for the release of prisoners and awareness messages in different provincial languages so that greater awareness is created.

Senator Mushtaq Ahmed said that the biggest need of the hour was to prepare a National Action Plan which should have a collective, coordinated and comprehensive response. He said that there is only one testing Lab in the entire province of Khyber Pakhtunkhwa which has the capacity to only do 700 tests per day. He also underlined the need for government to establish a coordination system between NGOs and Civil society organizations, in this regard, he said that the “Al Khidmat Foundation” of Jamat e Islami had already spent about Rs. 500 million through its networks of hospitals and clinics. He urged China to “do more” to help Pakistan in the provision of much need medical equipment.

Senator Talha Mehmood appreciated China saying “They are taking good care of Pakistani nationals” and he said that “people to people contact” is the core of Pakistan-China time tested Friendship. And he said that today for 220 million Pakistanis “All eyes are on China”. He also referred to the role of ‘Talha Mehmood Foundation’ which is providing rations to 10,000 families in Hazara.

Senator Anwar ul Haq Kakar said that we are lucky that clusters like the pilgrims from Iran and Tableegi Jamat have been identified which can then be tested and he also urged the need to test 900,000 persons who entered Pakistan after December 31, 2020.

At the conclusion of the Webinar, the political parties adopted a ‘joint open letter from political parties concerning closer international cooperation against COVID-19’, where they appreciated the role of China in “significant progress in epidemic prevention” and urged the ‘general public to comply with epidemic prevention as well as “fully leverage the strength of civil society organizations and volunteers” to combat the epidemic.

The political parties also urged all countries to “put the lives, safety, and health of the people above everything else” and they undertook to maintain ‘close communication for the purpose of injecting political energy to the global fight against Coronavirus’. Senator Azam Swati said he will personally send a report of this special Conference, together with recommendations, to the Prime Minister.

Finally, the open letter categorically stated that “we stand firmly against all discriminatory comments and practices against any country, region or ethnic group and any attempt to undermine the cooperation of countries to contain Coronavirus’.

All political parties agreed to their proactive role, above any politics, to serve humanity through promoting awareness of the coronavirus crisis and to provide medical and food supplies to the people, especially the less fortunate ones, in this hour of need.

Mati
Mati-Ullah is the Online Editor For DND. He is the real man to handle the team around the Country and get news from them and provide to you instantly.
Share
Facebook
Twitter
Pinterest
WhatsApp
Previous article
Reality of Corona Relief Tigers Force Shirts
Next article
Nobody will ask your money trail if you invest in Construction Sector, says PM Imran Khan
Share
Facebook
Twitter
Pinterest
WhatsApp