ISLAMABAD, Pakistan: The nation observed Youm-e-Istehsal on Thursday to express solidarity with the oppressed Kashmiri people on the completion of two years of the military siege of Indian Illegally Occupied Jammu and Kashmir (IIOJK).

It was on August 5, 2019 that the special Constitutional Status of the Indian Illegally Occupied Jammu and Kashmir was scrapped by the fascist Modi government.

In order to denounce the Indian unilateral illegal actions against Kashmiri people as well as the atrocities being carried out by the Indian forces in IIOJK, a host of events were arranged throughout the Country.

In connection with Youm-e-Istehsal, solidarity walks of one mile were arranged in all the main Cities including the Federal Capital. 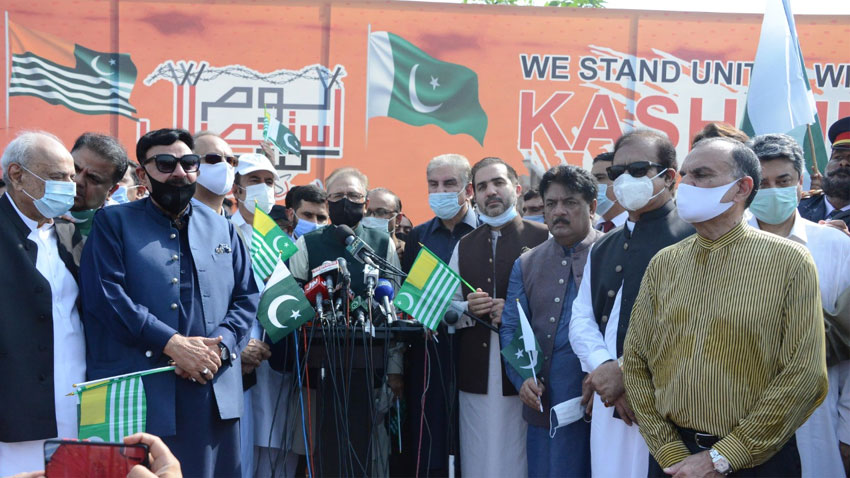 In Islamabad, President Dr. Arif Alvi led the rally which was attended by the Cabinet Members and people belonging to different segments of the society.

The participants of the rally, wearing wear black bands and carrying the flags of Pakistan and Azad Kashmir, raised full-throated slogans in support of the Kashmiri people.

Besides, one-minute silence will be observed across the Country. During which, the traffic will be halted and sirens will be played.

Meanwhile, posters and billboards have been displayed at the main roads of Islamabad and other Provincial Capitals to highlight the plight of Kashmiri people and expose the atrocities being committed by the occupation forces in Indian Illegally Occupied Jammu and Kashmir.

While addressing the rally, President Arif Alvi emphatically said that Pakistan will continue to stand by their oppressed Kashmiri brethren until they get independence from the cruel Indian clutches.

The president said that despite all Indian conspiracies, Pakistan is emerging as a strong nation which will get Kashmir freed from India. He said that India is playing with the fire and destroying the regional peace and stability.

Paying glowing tributes to the sacrifices of Kashmiri people, the president also made it clear that Pakistan will not hold any talks with India until it rescinds its illegal steps of August 5, 2019.

President Arif Alvi reminded the world community of its obligations towards the lingering dispute. He said that the United Nations had accepted the right of self-determination of the Kashmiri people. Though the world put the dispute on the backburner but the Kashmiri people continued to stand firm against the Indian oppression, he added.

Dr. Arif Alvi said that the presence of a large number of troops in the IIOJK is sufficient to open the world’s eyes regarding the atrocities being committed there.

However, he added that despite all sorts of oppression, the Kashmiri people are raising the flag of independence and their voices cannot be suppressed.

In addition to the solidarity walks, a one-minute silence was observed across the Country. During which, the traffic was halted and sirens were played.

Besides, posters and billboards were displayed at the main roads of Islamabad and other Provincial Capitals to highlight the plight of Kashmiri people and expose the atrocities being committed by the occupation forces in Indian Illegally Occupied Jammu and Kashmir.