All Arab Countries have listed ‘naswar’ – powdered tobacco snuff mostly consumed in Pakistan and Afghanistan – as a drug; therefore, the Anti-Narcotics Force (ANF) Punjab have prohibited all visitors from carrying ‘Naswar’ with them while traveling to Arab Countries.

The Regional Directorate ANF Punjab issued a warning through a pamphlet, cautioning Pakistanis against carrying ‘naswar’ to Arab Countries. It noted that all Arab Countries have included naswar in drugs list.

It said that carrying Naswar while travelling is a crime, and if naswar is found in someone’s luggage in any Arab Country, he will be severally penalized.

Earlier in May 2018, several Pakistani nationals were reportedly apprehended by Iraqi Officials at airports for possessing naswar. Eventually, Pakistan’s Embassy in Baghdad advised Pakistani visitors not to carry naswar while travelling to Iraq. 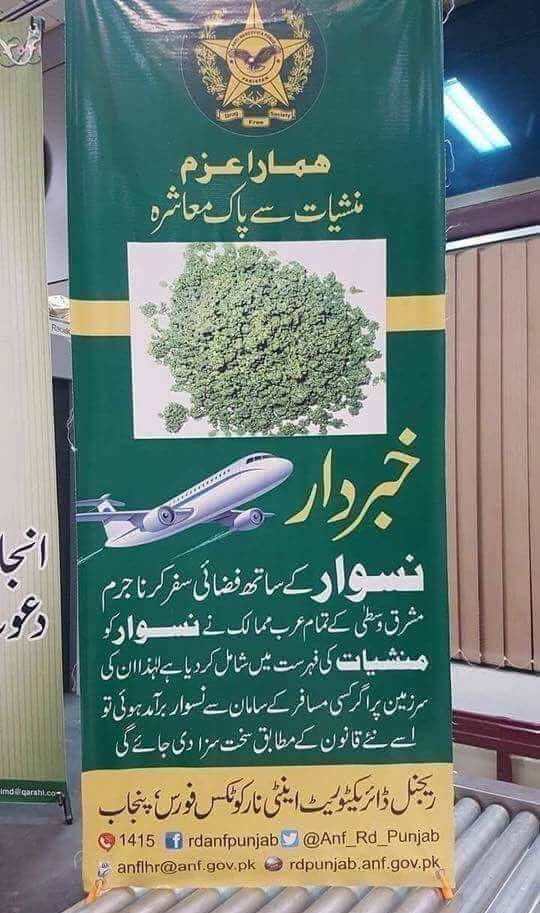 Mati
Mati-Ullah is the Online Editor For DND. He is the real man to handle the team around the Country and get news from them and provide to you instantly.
Share
Facebook
Twitter
Pinterest
WhatsApp
Previous articlePM urges NIH to enhance cooperation with provinces to address health issues
Next articleTom Cruise starrer Mission: Impossible – Fallout proves blockbuster