ISLAMABAD, Pakistan: The Prime Minister’s Special Assistant on Petroleum Nadeem Babar has hailed the British Companies’ interest to invest in Pakistan & expressed that the government would welcome investment and the presence of British Companies in the Energy Sector of the Country.

In a meeting with the British High Commissioner in Pakistan Dr. Christian Turner at the Petroleum Division in Islamabad on Thursday, the Special Assistant shared the structural reforms being carried out in the Energy Sector in view of the newly promulgated Renewable Energy Policy of Pakistan. 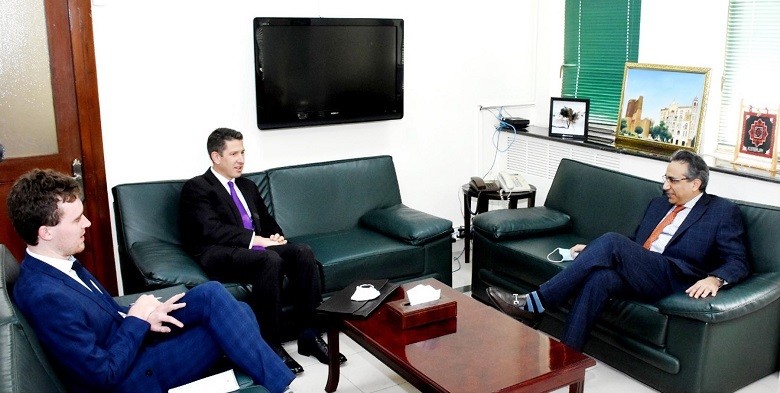 Nadeem Babar said that the government had set an ambitious target to introduce 20 percent renewable energy by 2025, and 30 percent by end of 2030. With an additional share of 30-40 percent hydel power generation, Pakistan will have the cleanest generation mix as a result.

The Special Assistant also apprised the envoy that the government is focusing on the assembly & manufacturing of wind turbines and solar panels for renewable energy projects in Pakistan with the collaboration of some Foreign Companies and also invited British Companies to participate in these projects.

The High Commissioner commended the initiatives taken by the current government to revamp the Energy Sector and said that the UK looked at the Pakistani energy market as of great potential.

Christian Turner shared that British Companies are interested to invest in the Energy Sector of Pakistan especially in off grids solutions and distributed generation system.

The envoy also indicated that approximately US$ 1.5 billion of credit line for export credit facility remains largely unused and urged Pakistani projects to utilize it more.

Mati
Mati-Ullah is the Online Editor For DND. He is the real man to handle the team around the Country and get news from them and provide to you instantly.
Share
Facebook
Twitter
Pinterest
WhatsApp
Previous articleLimousine Car 2020 – Price in Pakistan, Features and Images
Next articleFawad Chaudhry invites Huawei to form new partnership with Pakistan