ISLAMABAD, Pakistan: The Election Commission of Pakistan (ECP) on Tuesday issued schedule for the upcoming by-election in NA-120, a Lahore Constituency which fell vacant after the disqualification of Prime Minister Nawaz Sharif on July 28.

The by-election in NA-120 will take place on September 17, according to the schedule issued by the ECP in Islamabad.

The ECP said that the interesting Candidates fill their nominations with the Returning Officers (ROs) from August 10 to 12.

The Scrutiny of nomination papers submitted by the Candidates will take place from August 15 to 17 while the last date for filing of appeals against decisions of ROs has been set for August 21.

The last date for deciding of appeals by the appellate tribunal has been set for August 24 whereas the last for withdrawal of Candidature is August 25.

The final list of Candidates will be published on August 26, and polling will be held on September 17.

The ruling Pakistan Muslim League-Nawaz’s (PML-N) Candidate and incumbent Punjab Chief Minister Shahbaz Sharif will contest the by-election in NA-120 wherein a victory will lead him to become Pakistan’s 19th Prime Minister till next year.

Whereas his main contender would be Pakistan Tehreek-e-Insaf’s (PTI) Dr Yasmeen Rashid.

Dr Yasmeen Rashid was the runner up in the 2013 general elections from the same Constituency against PML-N’s Nawaz Sharif. 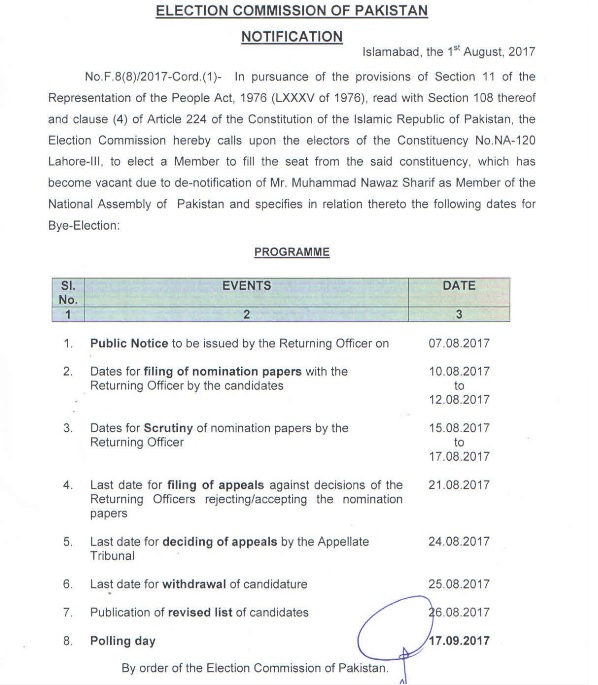 Mati
Mati-Ullah is the Online Editor For DND. He is the real man to handle the team around the Country and get news from them and provide to you instantly.
Share
Facebook
Twitter
Pinterest
WhatsApp
Previous articleChildren Summer Camp concludes at Lok Virsa
Next articlePakistan elects Shahid Khaqan Abbasi as its Prime Minister