Mumbai Attacks 2008 were an act of covert terrorism: Elias Davidson

While speaking at a roundtable discussion organized by the Center for Global & Strategic Studies (CGSS) at Islamabad Club on Wednesday, Elias Davidson stated that I looked into the Indian operation against Mumbai attacks as a criminal investigator. 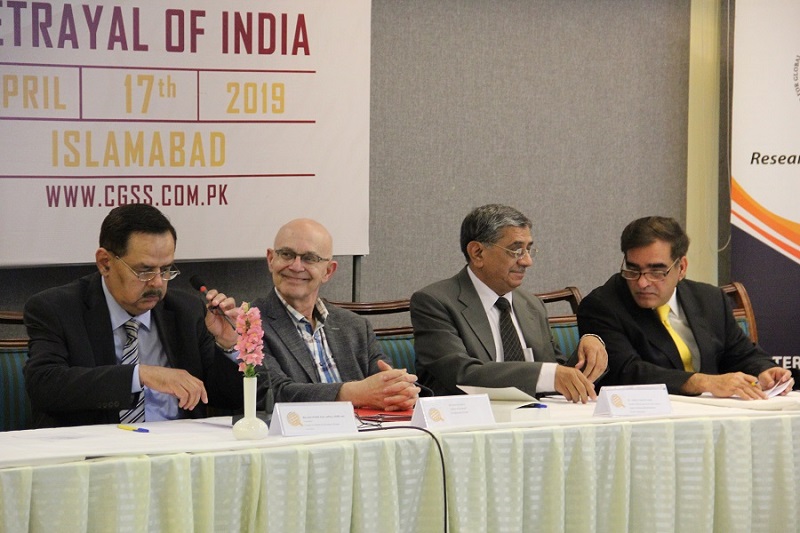 Similarly, he added, that in the 9/11 attacks, there were complete absence of any evidence. The United States doesn’t feel an obligation to justify their case and provide evidence against Afghanistan before waging the war. UN agenda of anti-terror discourse is to enact laws against terrorism. There is also a committee for counter terrorism which monitors each country. Counter terrorism agenda is a cover up used by several states against the Muslims, which India has also used. He highlighted that Muslim countries have nothing to do with terrorism, they are also not a part of 9/11. We must train our media to give appropriate reports and we must raise our voice against such propagandas.

Earlier in his operation remarks, the CGSS President Major General (retd) Syed Khalid Amir Jaffery thanked all the worthy participants and stated that Elias Davidson has exposed the malign agenda of India by providing facts.

The Expert of Defence and Nuclear Studies and Consultant CGSS Rahat Iqbal stated that such false flag operations can lead to nuclear standoff between the two nuclear powers.

The roundtable session was followed by an interactive question and answer session highlighting many other important facts of the false flag operations.

Mati
Mati-Ullah is the Online Editor For DND. He is the real man to handle the team around the Country and get news from them and provide to you instantly.
Share
Facebook
Twitter
Pinterest
WhatsApp
Previous articlePakistan Petroleum Limited spuds first Int’l exploration well in Iraq
Next articlePakistan Tehreek-e-Insaf disowns seven bodies using its name