ISLAMABAD, Pakistan: An Memedom of Understanding (MoU) Signing Ceremony between the Pakistan Science Foundation (PSF) and Institute of Space Technology (IST) for promotion and popularization of Science, STEAM Education in space science, technology and its application held at the Ministry of Science and Technology in Islamabad.

The Ceremony was witnessed by the Federal Minister Agha Hassan Baloch, the Secretary G.M Memon and other senior officers of the ministry, PSF and IST respectively. 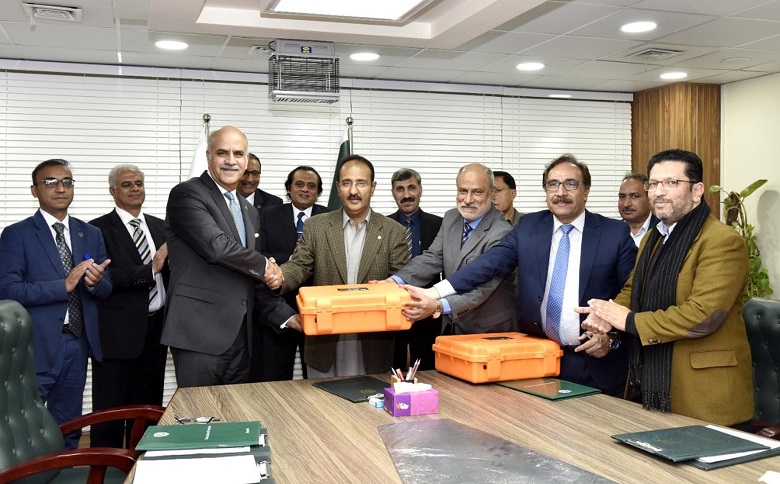 In this programme of cooperation, the PSF has planned to organize a Teenager Space Maker Camp for young Pakistani students, for which Chinese leading organization the China Youth Science Centre (CYSC) of China Association of Science and Technology (CAST) has very kindly provided ten space maker kits to PSF.

The PSF handed over these kits to the IST and the both would jointly undertake the Space Maker Camp. The teenage students will be trained to make space baloons by these kits which would reach up to 30 kilometres in the space.


The objective of this MoU to define the general framework of scientific and technological cooperation between the parties.

In addition, the MoU is aimed on getting benefits from each other’s expertise through mutual collaboration and interaction in joint scientific activities.

The MoU will also cover the areas of joint management, organizing and preparation of participation in international Olympiads, moots, galas and competitions.

While giving his remarks regarding the space maker camp, Agha Hassan Baloch said that this was the first program of its nature & it would borne positive results by uplifting the teenager students’ scientific skills and harness their talent in the right direction.

The minister said that for promotion of scientific aptitudes in the students, 50 STEM schools equipped with latest STEM labs were being developed across the Country and in January the training sessions for STEM teachers would be started.

Agha Hassan Baloch also directed PSF to send scientific caravans to hold scientific exhibitions in the govt schools of backward and remote areas of the country to develop a scientific awareness in the students.

The federal minister reiterated his resolve to enhance the practical scientific research in the country according to the needs of 21st century.

Mati
Mati-Ullah is the Online Editor For DND. He is the real man to handle the team around the Country and get news from them and provide to you instantly.
Share
Facebook
Twitter
Pinterest
WhatsApp
Previous article
President Arif Alvi for entry of women in Faisal Mosque’s Main Hall for offering prayers
Next article
President Arif Alvi visits Chinese Embassy to condole passing of Ex-President Jiang Zemin
Share
Facebook
Twitter
Pinterest
WhatsApp