Heavy Bikes with 600CC Engine to ply on Motorways soon

ISLAMABAD, Pakistan: Heavy motorbikes are likely to be seen running on motorways soon as the deadline set by the Islamabad High Court (IHC) for the National Highways and Motorway Police (NH&MP) to comply its earlier orders in this regard is almost over.

Last Monday, the IHC had set December 15, 2019 as the deadline and issued directives for the NH&MP to ensure the implementation of its judgement delivered on April 19, 2019 which had paved the way for motorbikes with at least 600CC Engine capacities or above to ply on motorways.

The Court also cautioned that if its orders are not acted upon within the deadline, it may initiate the Contempt of Court proceedings against the non-complier.

The advocate Babar Sattar, who represented Bikers in the Court, told media that the issue was brought into the Court’s notice last year. He said that heavy motorbikes were allowed to ply on motorways in 2011; however the former Inspector General NH&MP Zulfiqar Ahmad Cheema in 2013 imposed a ban on motorbikes’ entrance on motorways, and which still persists.

Babar Sattar told that last year, the Biker Club approached the Islamabad High Court and pleaded that heavy bikes be allowed to run on the motorway. Upon which, the IHC ordered the IG Motorway to submit Terms & Conditions for bikers in the Court, and restore the permission.

The advocate that the Motorway Police has been demonstrating reluctance on the issue.

Apprising the media about the delay in grant to permission to bikers, Advocate Babar Sattar told that the Motorway Police built a narrative in the Court that bikers violate the traffic rules which cause accidents. He told that as per the Motorway Police, delay is being made in granting permission in view of the safety measures.

As per the conditions for regulating entry of motorbikes on motorway set by the NH&MP and submitted in the IHC, the permission will be subject to the issuance of Biker Card by NH&MP and holding a valid motorbike license.

Likewise, a biker of at least 30 years of age will be granted permission to enter the motorway, and his/her maximum speed must be within 110 kilometer per hour (km/hr).

The pillion riding, one wheeling, and bike racing will stickily be banned. In addition, bikers won’t be allowed to ply on motorway after sunset. 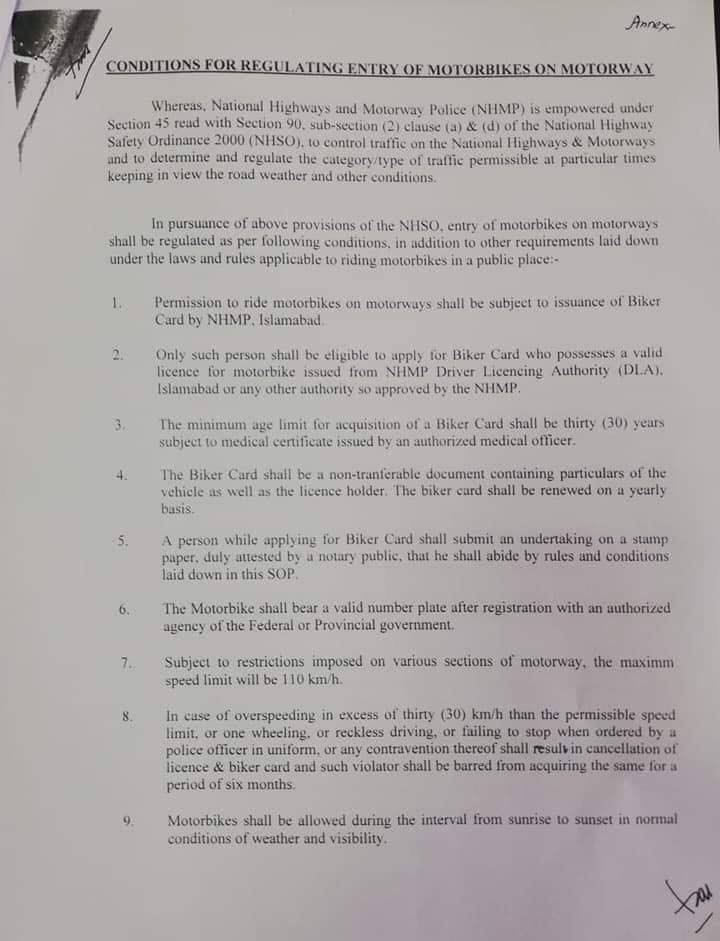 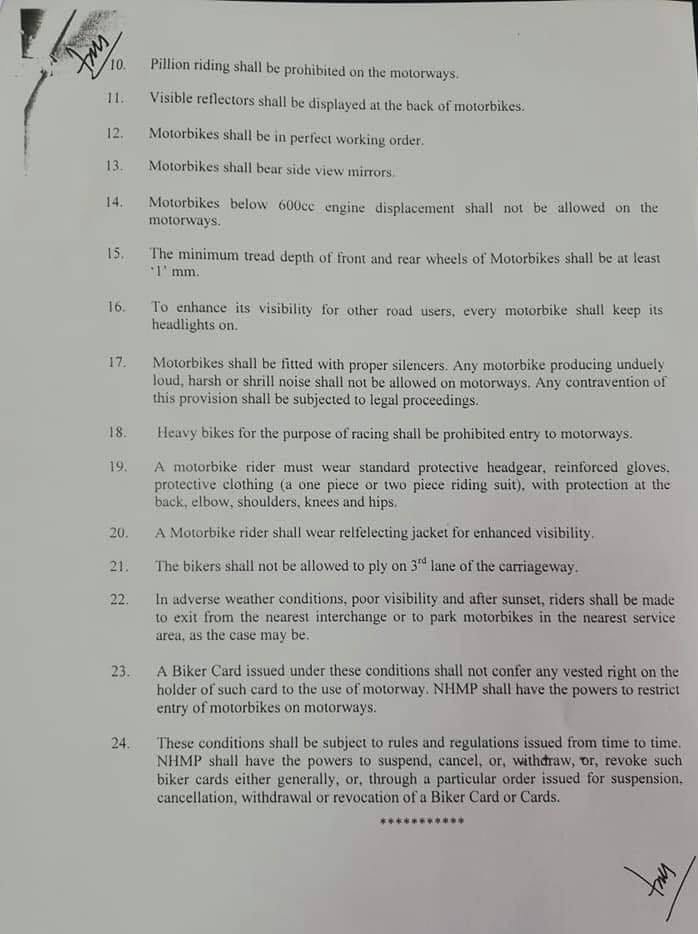