Islamabad, Pakistan: “More than 13 persons died at the spot every day in road accidents in Pakistan during the last 11 years while data is not available of injured persons who died after some days of their accidents”.

Participants were of the view that lack of enforcement, encroachments, and loopholes in providing a Driving License were some of the causes for accidents. They were of the view that dilapidated road conditions, potholes, and unplanned constructions along with highways were the main impediments for streamlining the traffic at highways. Heavy encroachments at G.T Road came under detailed discussion and participants observed that both sides of G.T Road had heavily encroached in Gujranwala Divison.

Participants were of the view the non-implementation of traffic rules, poor prosecution system, free-to-go policy for culprits, and various influential factors for the traffic police department are additional grounds for not being able to control the increasing tendency of road accidents in Pakistan. 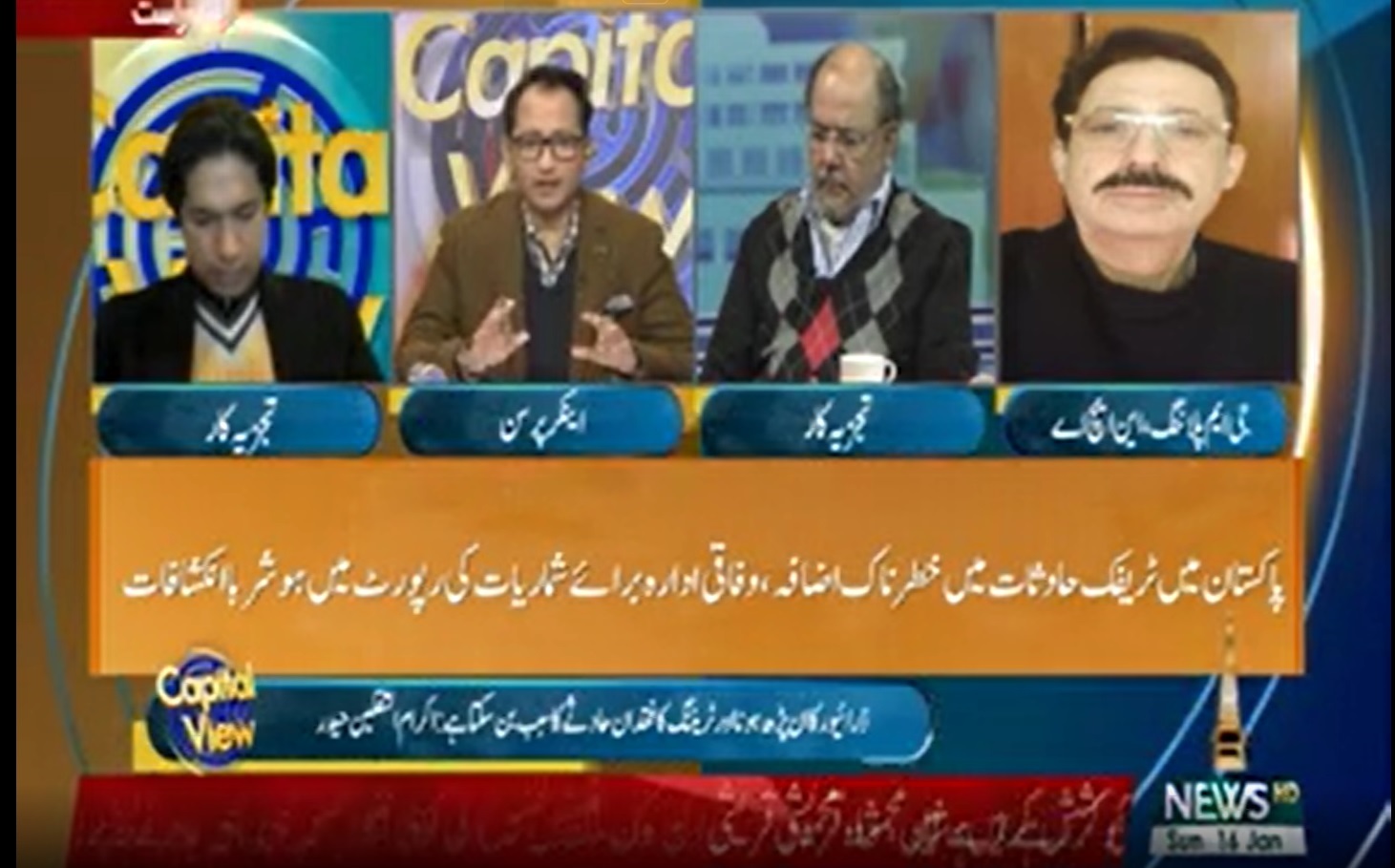 Inspector General of Motorways Police Inam Ghani explained in detail about enforcement of rules on Highways and was of the view that massive development along with Highways had created massive clogging inflow of traffic because the right of way for new colonies along with Highways had actually created a situation in which traffic had become like flow inside any city but people drive with high speed, resulting in accidents.

It may be mentioned that data shared in the show indicated that as many as 55,141 persons died in road accidents during the years 2009-2020.

The majority of accidents in cities and outskirts on highways occurred due to the motorcycle Rickshaw ‘Qingqi’ as they are commonly known because the majority of drivers are underage and driving without a Driving License and any training. The vehicle was introduced during the 1990s when increasing industrial development in the country made horse and donkey-driven public transport obsolete. 90% of Qingqi drivers drive without a license and the majority are underage.

Violation of traffic rules, overspeeding, non-professional drives on wheels, and issuance of licenses without ensuring the requisite competency level are apparent causes of road accidents.

Every year thousands of innocent commuters die in road accidents in Pakistan due to negligence and violation of traffic rules along with the loss of millions of rupees.

The role of governments to control traffic accidents by formulizing strict regulations or to ensure the implementation of existing rules is in missing.

The statics are very shocking and demand immediate and serious attention of all concerned for remedial measures.

The numbers published in PBS’s report reflect the cases which have been reported to police departments while presumably there would be significant numbers of daily traffic accidents which are not being reported and remain uncounted.

Other than road accidents, the number of rail accidents in Pakistan especially during the last three years is also distressing.

A total of 120,501 vehicles were involved in these accidents causing gigantic material loss.

The data further reveals that the majority of traffic accidents are recorded in Punjab and KPK compared to Sindh and Balochistan.

Besides the governments and concerned departments, it remains the primary responsibility of individuals to follow the traffic rules, avoid overspeeding, and do not drive the vehicles unless authorized.

Interestingly, the available data showed that Khyber Pakhtunkhwa and Punjab contributed to up to 80% of the total road accidents across Pakistan

The database of this study included six hundred road accidents on a total of 574 kilometers long routes of M1, M2, and M3.

According to the World Health Organization (WHO), approximately 1.35 million individuals die each year as a result of road traffic crashes and 93% of the world’s road traffic accident (RTA) fatalities occur in lower-middle-income countries

In a 2018 report, the WHO estimated that in Pakistan, RTAs result in 14.3 deaths per 100,000 population, which makes RTA fatalities an important public health issue that needs to be addressed immediately.

The Supreme Court of Pakistan ordered the Punjab government to enact legislation to ensure motorcycle rickshaw safety. The demands of the apex court included restrictions on the number of passengers carried, designation of routes, and routine vehicle fitness checks. The provincial authorities, however, have not made much progress on that front.