As per the Mobile Tax Policy devised by the incumbent government for Overseas Pakistanis returning to their native Country, entrants have to go through the mobile registration process at the airports.

Currently, Overseas Pakistanis are allowed to have one mobile phone each as they arrive in the Country. However, if they have more than one each, they would have to pay additional tax.

Those, who are traveling along with their families, may have one extra mobile each on their children’s names but if their children already hold NICOPs and photocopies.

It is prerequisite for Pakistani entrants to line up in a queue at the airports and pay fees to register their respective mobile phones. Otherwise, sims in those mobile phones won’t become operational. 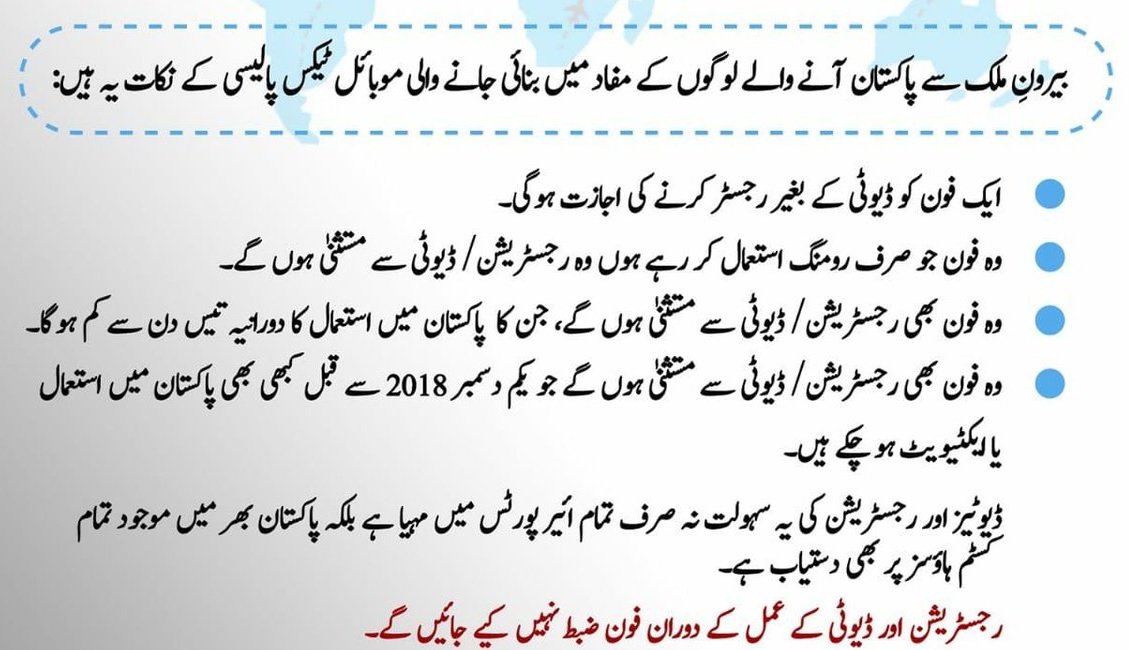 It is, therefore, suggested to them to have their passports, Pakistani CNICs or NICOPs, travel tickets and if possible photocopies of their boarding cards in their hand bags before leaving for Pakistan from abroad.

These preventive initiatives will help Overseas Pakistanis to go through the mobile registration process without much inconvenience. But in case of not holding photocopies of their boarding cards, they may suffer discomfort and face impediments as they would likely to find long queues of people waiting to get photocopies.

In addition to that, they may have to pay 10 to 20 percent more in Pakistani Currency as charges of photocopies.

For benefit of people travelling into Pak from abroad, the mobile tax policy for you is:
1) One phone allowed to be registered as duty free 2) No Registration/Duty needed on any phone(s) using roaming 3) No Reg/Duty needed if phone(s) to be used in Pak for less than 30 days.

Also, no registration/duty required on any phone that was activated or ever used in Pak before the 1st of December 2018.

Duties and registration can be done at either the airports or in any of the Custom Houses across Pakistan. Phones are not detained during the process of registration or duty payments.

Mati
Mati-Ullah is the Online Editor For DND. He is the real man to handle the team around the Country and get news from them and provide to you instantly.
Share
Facebook
Twitter
Pinterest
WhatsApp
Previous articleKillers of Syed Ali Raza Abidi can’t escape: Asif Ali Zardari
Next articlePakistan, Russian FMs mull Afghan peace process