In the rhetoric of isolationism stormed up by some of the Western countries, connectivity has become a buzzword in the regions that surround China and many countries have shown their commitment to regional connectivity.

In the Ambit of China’s Belt and Road Initiative (BRI), there is a possibility of creating an extensive framework of regional connectivity that could address the issues of the flow of goods, services, people, and knowledge between the countries having geographic contiguity. The current development in the region, particularly the Afghanistan situation has ensued an intense debate about the potential of regional connectivity for larger economic dividends that could be shared by regional economies. Pakistan and Afghanistan stand at the crossroads of three regions Central Asia, South Asia and the Middle East and connect in terms of critical supply chains through BRI and its flagship project China-Pakistan Economic Corridor (CPEC).

In the context of region, it also becomes crucial for countries like Iran, China, India and Russia to be part of the idea of shared advantage through infrastructure connectivity. For Central Asia, building transit corridor through Pakistan and Afghanistan is vital as it connects the landlocked Central Asian economies to the major global markets. In this scenario improved infrastructure would allow these countries to carry out trade through land routes that are most effective than the air routes.

Pakistan, too, would benefit from this connectivity arrangement as it would provide Pakistan efficient and convenient routes in the realm of regional connectivity. Most important component of CPEC is the Main Line One (ML 1) being deliberated by Pakistan and China for quite some time. Under the broader scope of work, mega railway project would upgrade ML 1 from Karachi to Peshawar and from Taxila to Havelian spanning over 1872 km. The project includes laying of new railway tracks with speed up to 160 km per hour, rehabilitation and construction of bridges, provision of signaling and telecom systems and building of underpasses and flyovers.

The ML 1 project was approved by National Economic Council in August 2020. Under the proposal of Federal Government, Pakistan plans to contribute 10% of the total cost of project as equity while 90% is to be met by China under the CPEC framework. China has proposed loans for ML 1 project on commercial terms from Chinese Financial Institutions whereas Pakistan has called for easing of financial terms and provision of loans on concessional rates. The project’s core objective is to reduce logistic cost and enhance real efficiency for industrial and trade connectivity trade activity across the country. Besides creating massive employment opportunities, ML 1 also aims at reducing the cost of operation and ensure safety of passengers and freight. To begin with, the project shall also enhance lines capacity from 34 trains to 137 trains each way per day.

Pakistan has also proposed to extend ML 1 project to Torkhom border with potential to link it to Afghanistan railway network. The project, therefore, is vital for connectivity with Afghanistan, Central Asia and beyond. In view of changing regional situation, commencing work on ML 1 is crucial for regional economic integration and development. According to an estimate, ML 1 is expected to cost 1119 billion rupees of which 1066 billion rupees will be shared by China and around 55 billion has to be contributed by Pakistan. That clearly means that Pakistan would be seeking a loan from China to the tune of $ 7 billion for this huge undertaking. An amount less than 1% of the total cost of the project has been allocated for ML 1 for the fiscal year 2021-2022 which clearly means till June 30, 2022 no significant progress would be made in this gigantic project beyond its design and pre-project preparations.

While ML 1 is declared a strategic project by 6th JCC in Beijing, the work towards its implementation seems to have stalled. Given its importance as a strategic project that has reginal connectivity potential of huge scale, Pakistan and China should finalize the details of the project on priority and carry out implementation on war footings. Like Karakoram Highway, ML 1 shall also be an icon of Pakistan-China friendship for times to come. 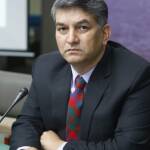 The writer is the Director of the China Pakistan Study Centre at the Institute of Strategic Studies Islamabad.