ISLAMABAD, Pakistan: Minorities Alliance of Pakistan organized a Conference on Unity and Solidarity to pay homage to decedent Shahbaz Bhatti for his services for human rights, justice and peace, and urged the government of Pakistan to take adequate measures to tackle the extremism and violence in the name of religion, and adopt law and policy reforms to advance religious freedom and social cohesion.

Speaking on the occasion, Akmal Bhatti Advocate vowed to focus his efforts on promoting pluralism and religious harmony in the country following the vision of late Shahbaz Bhatti, and made a commitment to continuing efforts to fight extremism, violence, and hatred based on sectarianism for plurality in the society to ensure peaceful progress of the Country. 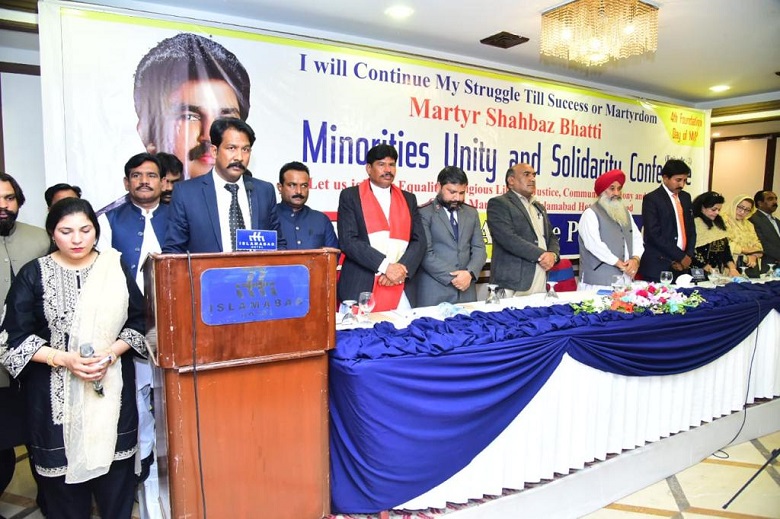 Shamaun Alfred Gill express his grave concerns over the misuse of blasphemy laws, and the growing extremism and intolerance in the society which is bringing Pakistan into disrepute.

Pakistan Peoples Party (PPP) former Senator Farhatullah Babar said that every individual would have to play his or her role to carry forward the mission of late Shahbaz Bhatti for building a peaceful and all-inclusive society.

Romana Bashir said that the martyrdom of Shahbaz Bhatti left the Christian community in deep shock, as he was striving to bridge gaps between the diverse segments of the society which are divided into the lines of religion, sect, ethnicity, and language. She observed that minorities have played a key role in the creation of Pakistan and will continue their role in nation-building.

Bishop Samuel Azariah said that we should seek God’s guidance to carry forward Shahbaz’s mission. He urged his peers that there was a need to win the hearts of their fellow Pakistanis through the message of acceptance, peace, love, care and unity. “We need a systematic effort to achieve equality for all.”

Asif Bastian said that Shahbaz Bhatti was devoted to many causes in pursuit of making Pakistan, and the world, a better place. He fought for equal rights for people of all faiths, for the marginalized in society. We need to promote his legacy and make efforts for the equality of rights and opportunities in Pakistan.

Meanwhile, the chairperson of the Voice for Justice Joseph Jansen said that Shahbaz Bhatti lived for the voiceless, if we want to carry forward his legacy, then we need to make a commitment to change the plight of those living in the darkness of persecution, victimization, to bring justice for those who are denied justice.

Ashiknaz Khokhar said that all people of all faiths should unite and condemn violence in the name of religion, and work together to end the violent extremism which demeans us all.