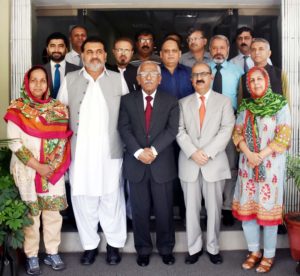 While speaking during his visit to AIOU in Islamabad, the minister also praised AIOU’s rich Country-wide infrastructure.

The education minister also commended the University for its special focus on the society’s welfare activities, providing free education to the marginalized sections of the society as well as the area like FATA and Balochistan, the students of which get free matric education.

Yusuf Shaikh said he also briefed the Senate Committee on Education at its meeting held on Tuesday of the good work of the University.

It was noted that there had been tremendous progress at its part since its establishment in 1974.

The minister said the University had the honour of having Dr. Shahid Siddiqui as its Vice Chancellor who enjoyes high professional caliber, with illustrious academic background.

Stating with pride, his personal years’ long interaction with this University, Yusuf Shaikh said he knew how it built up its image as a mega educational institution in the country.

Earlier on his arrival, the education minister was welcomed by the University’s Vice Chancellor Professor Dr. Shahid Siddiqui and senior academicians and officers.

The Vice Chancellor gave a detailed briefing to the federal minister, highlighting the initiatives taken during the last four years.

The AIOU Vice Chancellor also told the federal minister about the University’s financial assistance schemes and the employees’ welfare initiatives.

The University also took responsibility of giving educational response to the China-Pakistan Economic Corridor (CPEC), and setting Chinese Language Centers with the collaboration of the Chinese Universities, he added.

Mati
Mati-Ullah is the Online Editor For DND. He is the real man to handle the team around the Country and get news from them and provide to you instantly.
Share
Facebook
Twitter
Pinterest
WhatsApp
Previous articlePEMRA Employees donate for Diamer Bhasha and Mohmand Dams
Next articleHuawei Surpasses Apple to Grab Number Two Spot Globally