Memories I live and breathe – The Call to Pakistan

Judge a moth by the beauty of its candle.

Shams is invisible because he is inside sight.

He is the intelligent essence

Of what is everywhere at once, seeing. (Rumi)

Pakistan tends to be a rather misunderstood corner of our planet, with a plethora of negativity and associated images emanating from international mass media. Undoubtedly, such an overrepresentation has contributed largely to a somewhat distorted image of the country.

Through my first-hand experiences, I have subsequently sought to fill this enormous gap, with an aim to provide information and present this oft-maligned place in a more balanced way. Somehow, assuming the role of accidental brand ambassador, I have found myself reporting on aspects of the country, which are often overlooked and shielded from the international eye.

My writings have ranged from hard political, economic, and diplomatic to the more light-hearted. Yet, my attempts to present a Pakistan beyond the media stereotype have frequently been met with resistance. Further, my visits seem to have placed me in the precarious position of bringing a non-Pakistani voice to the table and consequently attracting criticism for such an ‘idealistic’ stance, as well as several rebukes for even visiting the country in the first place, given “The way they treat their women!” Sometimes, even I find the ignorance astounding: “Is that safe?”; “I thought everyone would be in a burqa,” while I’m left to explain that the dress code for women in Pakistan is largely not as in Iran or Afghanistan.

Despite Pakistan being home to two Nobel Peace Prize laureates,  including the youngest-ever, Malala Yousafzai, somehow the reality of many Pakistanis as urban, well-educated, ambitious, upwardly mobile, dynamic, and many with a strong entrepreneurial spirit, is getting lost in the fray.

No matter the amount of television news reports you see or articles you read, nothing heightens your sensitivity toward a place more than first-hand experience. My well-considered opinion is that Pakistan receives a lot of bad press and, frankly, deserves better.

The journey starts in 2007, when, as a student, I was invited to present research at a language-teaching conference, along with five other students from the University of Sydney. Our travels all over the country turned out to be a life-changing experience.

My second visit occurred at the end of 2009 when a friend invited me to join her and her family for the end-of-year holidays. In 2012, a couple of brother-sister friends from Sydney decided to have a double wedding extravaganza in Karachi and it was such an honour to share in their happy occasions.

In 2015, one of my best friends married in Karachi; the pre-wedding preparations were certainly fun, yet nerve-racking at the same time. The most recent visit in 2019 was at the invitation of a friend in Lahore for his wedding celebrations. And the difference between a Punjabi wedding and a Karachi wedding really struck me! Beyond the purely social engagements, I manage to give at least one talk, and in 2019, I gave a talk to some very engaging high school students in Lahore and have previously appeared on a talk show for PTV World in Karachi.

In Australia, I give occasional talks and enjoy attending functions to further Australia-Pakistan relations. Throughout those five visits, I have developed an affinity for colourful fashion and handicrafts; whether a Sindhi wall hanging with inlaid mirror work given to me by a friend in Karachi; a beautiful woven carpet from Lahore; a wooden- and silver-framed mirror, plus some cushions from Jafferjees, all take pride of place in my home. For special occasions, I like to wear “Made in Pakistan,” whether a striking shawl or one of my bespoke pieces by a designer friend in Karachi, co-ordinated with bangles and other fun pieces of which I have amassed quite a collection. For everyday use, a Jafferjee’s handbag has turned into a favourite. There’s a little bit of Pakistan fairly close by at any given moment.

As much of the world is emerging after a harrowing couple of years since the start of the COVID19 pandemic, there is renewed excitement in the air. On the whole, Pakistan has fared well in the management of the pandemic, thanks to gold-standard tracking and record-keeping developed during the polio vaccination drive. 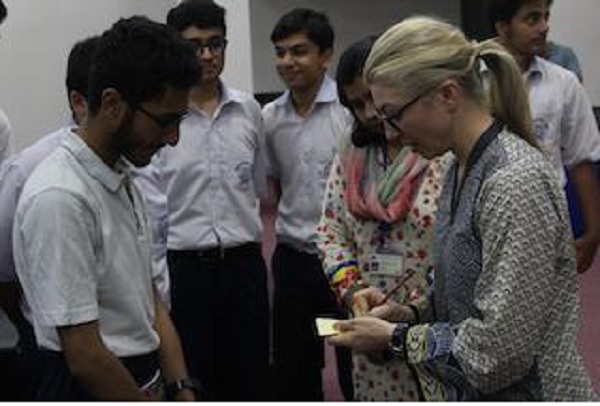 And I’m feeling the pull, back to Pakistan to reunite with friends who have become like family and experience more of the five Fs: friends, family, fun, fashion, and food – khana: the most important word in Urdu! Overwhelming generosity and hospitality, historical treasures, archeological sites, the varied perspectives of multicultural Pakistan from the Eastern parts of Punjab across to Balochistan towards Iran, each with their own identities uniquely expressed through differing customs, styles of music, and varied spices used in their respective cuisines will captivate even the most discerning traveler and mesemrize you just like a snake charmer on Clifton Beach in Karachi. You, too, will submit.

On my last visit, I vowed to venture up north on my next visit. We had a glimpse of Pakistan’s striking northern beauty when we stopped in delightful Nathia Gali en route from Abbottabad to Islamabad, in 2007, and so the Himalayas are a huge drawcard for the next trip. At the top of the list are Chitral, Mingora, Swat, and around Hunza, Skardu, and Gilgit. For geology enthusiasts, Pakistan is home to the second-largest salt mine in the world: the Khewra Salt Mine, a prime tourist attraction, located in the Province of Punjab. Thanks to policy reforms in recent years, rest assured that this kitchen staple will reach you directly from Pakistan.

My memories are, indeed, vivid and wonderful, past and present, filling me with warmth and gratitude for all the amazing friendships and connections forged throughout the years; and every time I return, the memories and friendships just keep getting more wonderful and more amazing. It feels like the time is ripe to relive some old, treasured memories and create some new ones!

Note: Danielle M. Gehrmann . The author is a writer, translator, and editor based in Sydney.