ISLAMABAD, Pakistan: The 7th China-Pakistan Economic Corridor (CPEC) Media Forum was held here in Islamabad. The forum was jointly organized by the Pakistan-China Institute (PCI) and China Economic Net (CEN) in cooperation with the Embassy of the People’s Republic of China in Pakistan. It is conducted as an annual event in Beijing and Islamabad on alternate years.

The theme of this year’s forum was “Enhance New Media Cooperation to Depict the Multidimensional and Comprehensive CPEC”.

The Forum conducted in-depth exchanges and discussions on topics including ‘CPEC Phase 2: Opportunities & Challenges’, ‘Pakistan, Global Development Initiative, and the Role of Media’, and ‘Objective and Fair reporting of CPEC’. 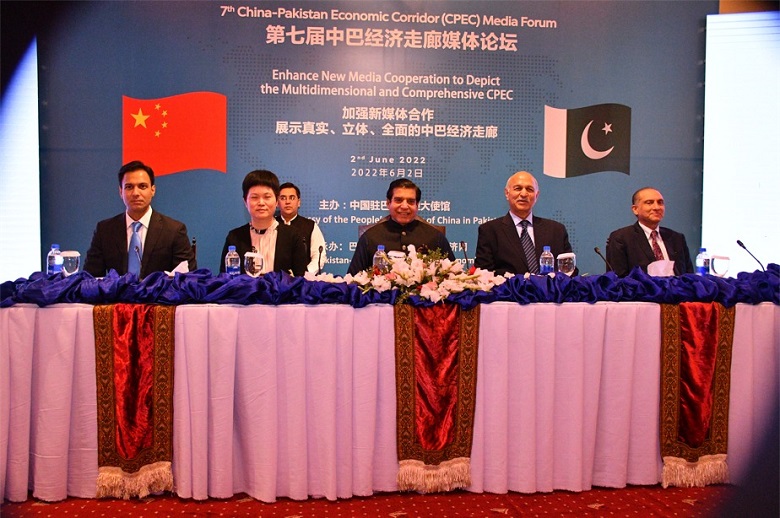 The opening session was moderated by Mustafa Hyder Sayed, the Executive Director of the Pakistan-China Institute. Speaker National Assembly of Pakistan, Raja Pervez Ashraf was the Chief Guest.

The establishment of the CPEC Media Forum in 2014 has paved the way not only for international information sharing and news collaboration, but also for the people of both countries to learn about, and from, each other.

In his opening remarks, Senator Mushahid Hussain Sayed thanked China for helping Pakistan during COVID-19 by extending much-needed medical and moral support, which saved millions of lives. China, he said, established an air corridor for 6 weeks in March-April 2020 which enhanced Pakistan’s capacity to contain the pandemic at home. Commenting on the dividends of CPEC, he said that CPEC has created 75000 jobs for Pakistanis so far, and energy projects under CPEC have produced over 5000 MW of electricity.

While rejecting the Cold War Mentality, he advocated for multilateralism and connectivity and said the enemies of Pakistan-China friendship have launched a campaign of disinformation and fake news against CPEC. Pakistan-China relationship, he maintained, has withstood the test of times and emerged as a uniquely robust  and resilient relationship.

Raja Pervez Ashraf, Speaker National Assembly of Pakistan, in his keynote speech said that CPEC has changed the destiny of so many people in the country and, in fact, through CPEC, China has given a vote of confidence in Pakistan’s potential to build a better future. Not even a day passes when we don’t hear about development by Chinese enterprises on CPEC projects in the media. The professionalism and consistency through which Chinese enterprises continued work on CPEC despite a global pandemic like COVID-19 when almost every project in the world hit the snag, has been lauded by the governments of Pakistan and China as well as international media. As the CPEC moves forward, the media’s responsibility to report fairly and factually on CPEC would grow.  Moreover, he said that the media, since the inception of CPEC, has played a very important role in the dissemination of facts on CPEC. He also commended Pakistan-China Institute and China Economic Net for hosting the forum and said that through events like these, both countries get an excellent opportunity to consolidate the existing all-weather friendship.

A special video message by the Foreign Minister of Pakistan, Bilawal Bhutto Zardari was played during the event. He said that the Pakistan-China relationship is indeed a special relationship that has no parallel in contemporary international relations.

For me personally, he remarked, it is a great honor to be talking about this special bond because my grandfather Prime Minister Shaheed Zulfiqar Ali Bhutto is the architect of this very relationship and in 1963, he signed a historic boundary agreement between Pakistan and China. He was also the last world leader to meet Chairman Mao. Moreover, he said that the Pakistan Peoples Party is committed to sustaining, maintaining, and continuing this relationship.

Madame Pang Chunxue, acting ambassador of China in Pakistan said that we need to encourage the strengthening of narrative building and join hands in combating fake news. Some western countries continue to slander China on issues related to Xinjiang, Tibet, Hong Kong, and spread rumors on CPEC. Media bears the sacred mission of advocating order and justice. She said that we should take advantage of our complementarity, increase positive publicity, take the initiative for building narratives from our own perspectives, and jointly respond to negative public opinions.

Moreover, she termed CPEC a valuable asset that has created huge potential for media cooperation. Lastly, she hoped that the media of China and Pakistan will play a more active role as a bridge, tell true stories of China-Pakistan cooperation, and consolidate the all-weather friendship between the iron brothers.

Moin ul Haque, Ambassador of Pakistan to China said that events like CPEC Media Forum are vital to fighting misinformation related to CPEC. He said that with the support of the Chinese government, the Embassy of Pakistan has organized many events including Pakistan Film Festival; Pakistan-China Puppet Show, Photography and Painting Exhibition; Pakistan-China Women Forum; First Pakistan-China Literary Forum, and Pakistan’s participation in the prestigious Beijing International Book Fair. These events have reinvigorated the friendly sentiments between our two countries and helped pass on the finest traditions of bilateral friendship to our younger generations.

Moreover, PCI has also launched a monograph titled “CPEC: Facts Vs Fiction”. Mustafa informed the audience that the Pakistan-China Institute will be publishing “The Governance of China”, Part 2 and Part 3 in Urdu, which are authored by President Xi Jinping.

Zhao Zizhong, Vice President of Economic Daily, said that the development of Asia is impossible without the contributions of China and Pakistan. Since the establishment of diplomatic ties more than 71 years ago, the two countries have always helped each other and firmly supported each other on issues concerning each other’s core interests and major concerns. In recent years, in particular, thanks to the joint efforts of both sides, the China-Pakistan Economic Corridor (CPEC) has achieved remarkable results, brought important benefits to the two peoples and added a strong impetus to regional prosperity. Under the theme of “Enhance New Media Cooperation to Depict the Multidimensional and Comprehensive CPEC”, he proposed three suggestions i.e., seek truth since it is the essence of news hinges, seek harmony since Chinese culture values harmony in diversity, and seek innovation since the characteristic of news is demonstrated by new content and new forms.

Tian Yuhong, Executive Secretary of the All-China Journalists Association, CPEC is an economic corridor featuring mutual benefit and win-win outcomes. It is also a cultural corridor featuring amity and people-to-people ties. The infrastructure under CPEC has served as a connecting bridge, while the media cooperation between the two countries has opened an avenue of “people-to-people bond”. He proposed that the media of both countries should tell true stories and spread positive energy, adopt to new media technologies to create appealing content for Gen-Z, and strengthen cooperation among journalists’ associations.

Yang Jiandou, CEO of All Pakistan-Chinese Enterprises Association (APCEA) said that the Chinese investment in Pakistan is a phenomenal opportunity for the Pakistani community to prosper and become self-sufficient. As a flagship project within Pakistan, the CPEC has attracted 25 billion dollars in Foreign Direct investment. CPEC is not limited to constructing roads but is extended to building capacity in the energy and industrial sector. Phase 2 of the CPEC comprises a total of 27 projects that are planned to improve seven different sectors within Pakistan. These are agriculture, health, education, drinking water supply, poverty alleviation, and vocational and educational training.

Hameed Haroon, CEO of Dawn Media Group said that he was privileged enough to lead a delegation in the early 1980s from the media to China and that and subsequent visits to China have been unforgettable in my mind. Commenting on the philosophy of 3 Cs i.e., Corridors, Cultures, & Connectivity advocated by Senator Mushahid Hussain Sayed, he said that these 3 Cs are the basis of his message to the forum. He said there is a need for cross-cultural cooperation and understanding to cement the existing people-to-people bond which is considered the heart of the unique bond between Pakistan and China. The main form of cultural exchange through cultural artifacts, scholars, historians, and philosophy began on the Silk route which is an old historical route stretching back over 2000 years that are parts of the history of Pakistan that can not be understood without the accounts of Chinese pilgrims who traveled in those early periods from China to Pakistan. We need to promote a good understanding of CPEC and we shouldn’t fall victim to Western-style propaganda which simply seeks not to win us over to their cause but to keep us as a subservient aide in their international maneuvers. Journalist Najma Minhas urged the need to delink geopolitics from CPEC and focus on its people-centric development.

Wang Qianting from China Media Group said that the benefits of the CPEC project to Pakistani society are obvious. At a time when the economy is generally facing imported inflationary pressure, the media, while maintaining necessary criticism, should convey more confidence to the public and guide public opinion to build consensus to overcome difficulties together.

Ambassador ®️ Aizaz Chaudhry, Director General of the Institute of Strategic Studies Islamabad said that China’s vision is to create a community of common destiny is a visionary step for the betterment of humankind since it is the connection between humanities that matters in the end.

Moreover, he said that we need to counter and check false propaganda through data-driven reporting.

After the speeches, a book titled ‘China-Pakistan Economic Corridor (CPEC): Stories Behind” was launched by Cui Jin, Editor of China Economic Net.

Mati
Mati-Ullah is the Online Editor For DND. He is the real man to handle the team around the Country and get news from them and provide to you instantly.
Share
Facebook
Twitter
Pinterest
WhatsApp
Previous articleAiwan-e-Sadr to invite members of AJK Legislative Assembly to discuss Indian atrocities in IIOJK
Next articleCOAS visits Command and Staff College Quetta