ISLAMABAD, Pakistan: As the Nation is set to celebrate the ‘78th Pakistan Day’ on March 23, 2018, the preparations for the Military Parade are in full swing at Shakarparian parade ground in Islamabad; however, it has caused massive traffic jam adding worries of Twin Cities commuters.

Each year on March 23 all three armed forces of Pakistan hold a joint parade in Islamabad near Faizabad Interchange to mark ‘Pakistan Day’; for which just a few days before they begin rehearsals and drills to celebrate the Day in a spectacular manner.

Thanks for your participation. We have a task at hand. Together we do it IA.#PakDayParade2018 #PakistanTheLandOfPeace pic.twitter.com/sPFhkc9aob

In view of the military parade rehearsals and the mega event on March 23 (Friday), Islamabad Traffic Police (ITP) has issued a special traffic plan for maintaining smooth flow of traffic on the City roads, asking commuters to take certain alternatives routes as vehicles would not be allowed to enter roads adjoining Faizabad Interchange in a specified time period. 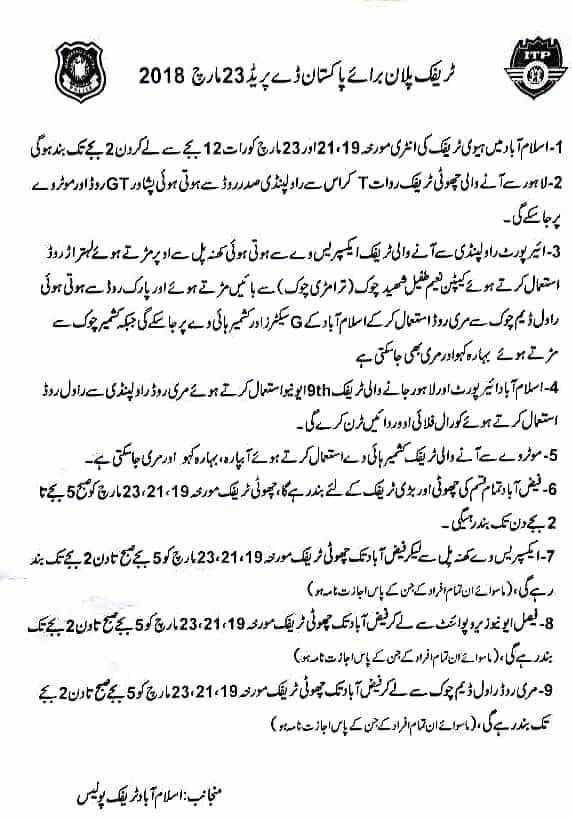 As per the traffic plan for Pakistan Day Parade issued by the ITP, heavy traffic would not be allowed to ply in the Federal Capital from 12:00 am to 2:00 pm on March 19, 21 and 23 while Faizabad Interchange would remain closed for all types of traffic from 5:00 am to 2:00 pm on these days.

Likewise, Islamabad Expressway from Khanna Pul to Faizabad, Faisal Avenue from Zero Point to Faizabad, and Murree Road from Rawal Dam Chowk to Faizabad would also remain closed for traffic from 5:00 am to 2:00 pm on March 19, 21 and 23.

Therefore, a massive traffic jam is being witnessed in alternative routes on Monday which would now continue to cause worries to people till March 23.

Mati
Mati-Ullah is the Online Editor For DND. He is the real man to handle the team around the Country and get news from them and provide to you instantly.
Share
Facebook
Twitter
Pinterest
WhatsApp
Previous articleUzbekistan stands as happiest country among CIS countries
Next articleAir Marshal Mujahid Anwar Khan Takes Command as 22nd Pakistan Air Chief