ISLAMABAD, Pakistan: The Federal Information Minister Marriyum Aurangzeb has paid rich tribute to Shaheed Benazir Bhutto on Wednesday, saying that the vacuum in the Pakistani politics created through the former’s martyrdom could never be filled in.

In her message on 10th death anniversary of Shaheed Mohtarma Benazir Bhutto being observed on Wednesday (today), Marriyum Aurangzeb said that Benazir Bhutto made unprecedented efforts for the restoration of democracy in the Country.

The minister said that her struggle for rule of law, Constitution and human rights was also unprecedented. She said that historical document of Charter of Democracy is the result of joint efforts made by Benazir Bhutto Shaheed and Pakistan Muslim League-Nawaz (PML-N) President Nawaz Sharif.

The information minister said that Benazir Bhutto’s name will always be remembered in political and democratic history of Pakistan. 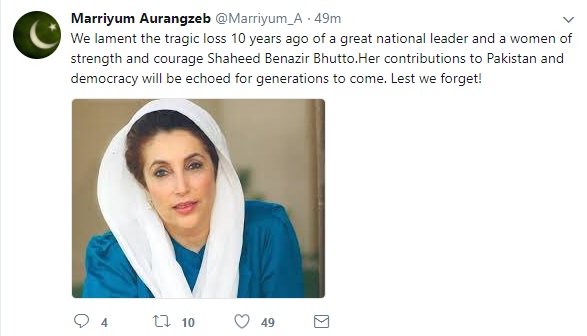 In connection with her 10th death anniversary, PPP is organizing a large annual public gathering at Garhi Khuda Bakhsh in Larkana to offer salute and tributes to Shaheed Benazir Bhutto.