The real estate tycoon Malik Riaz has allegedly unlawfully occupied 506 Kanal Land valuing Rs 2.75 billion for the Bahria Enclave Project in the Federal Capital, and in collusion with police threatened the land owners of dire consequences.

In addition, Malik Riaz also refused to abide by his promise of paying the land amount to owners, he had earlier made with them after illegally occupying the land, said a report by Jahangir Minhas published in Daily 92 News on Wednesday.

As per the details mentioned in Jahangir Minhas’ story, Malik Riaz inked an agreement to buy 506 Kanal Land situated in Moza Tumair, Islamabad from its owner Nisar Ahmed Afzal. Malik Riaz also assured the land owner to pay the amount next day; however, he only gave a Rs 20 million cheque and illegally occupied all of the lands with help of 25 armed men.

The land owner Nisar Ahmed Afzal told Daily 92 News that despite reaching a deal with him to buy 506 Kanal Land worth Rs 2.75 billion in Moza Tumair, neither Malik Riaz paid him the amount nor he returned him the occupied land. 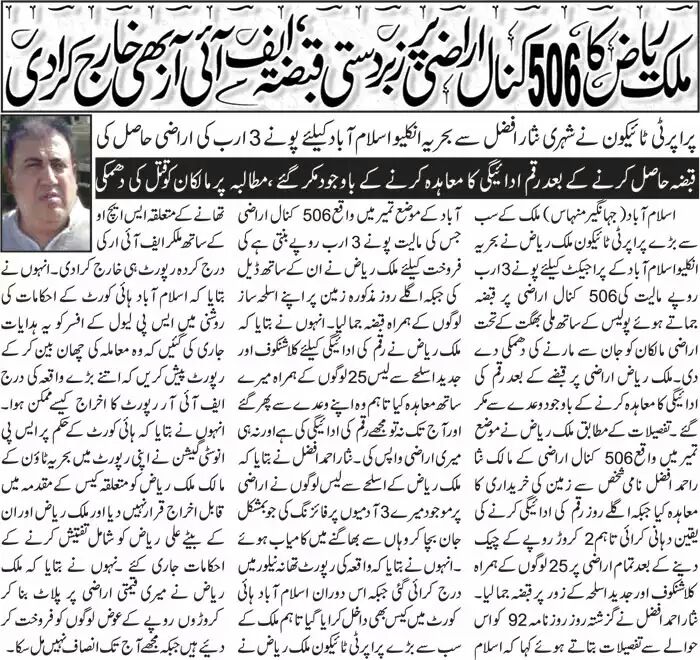 Nisar Ahmed Afzal claimed that armed men of Malik Riaz also opened firing on his three persons, who were present on the land, but luckily they survived as they succeeded to run away. He claimed that a First Information Report (FIR) was registered in Nilour Police Station against the incident while a plea was also filed in Islamabad High Court (IHC). But, he added, Malik Riaz in connivance with the Station House Officer (SHO) concerned made the FIR cancelled.

Nisar Ahmed Afzal also claimed that as per the orders of IHC, an officer of SP level was directed to investigate the issue and submit its findings in a report that how a FIR was cancelled after it was registered of such a major incident. He said that the SP Investigation in his report didn’t exclude Malik Riaz from the concerned case, and he also issued orders to investigate Malik Riaz and his son Ali Riaz.

Mati
Mati-Ullah is the Online Editor For DND. He is the real man to handle the team around the Country and get news from them and provide to you instantly.
Share
Facebook
Twitter
Pinterest
WhatsApp
Previous articleFINCA resolves to become digital and data driven for 2018
Next articlePakistan’s innumerable sacrifices in war on terror above board: Ahsan Iqbal