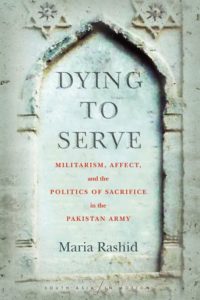 The recently published book “Militarism, Affects and the Politics of Sacrifice in the Pakistan Army” written Maria Rashid is another attempt to malign sacrifices of Pakistani nation and its armed force given to win war against radicalism and terrorism.

Maria Rashid who is psychologist by profession recently delivered a talk on her book launching at the London School of Economics. She, during the talk, tried to influence the audience while describing the militarism effect by using sacrifices in Pakistan Army as a political tool. One should remember that Dr Ayesha Saddiqa, a well-known anti-Pakistan Armed Forces character was also present on the occasion and was actively involved in the vicious discussion against our security institutions.

In her book, she has attempted to follow the popular spiteful narrative of the Pakistani liberals settled in the West i.e. hurling venom on Pakistan Army. She claims that this book is the only text on the Pakistan Army that ethnographically focuses on the lives and deaths of Non-Commissioned Officers and Soldiers.

This effort is the continuation of the campaign to hit the center of gravity of Pakistan for obvious reasons for which Pakistani nationals settled in the west are used.

Let’s put the record of the lady correct by following arguments:-

Mati
Mati-Ullah is the Online Editor For DND. He is the real man to handle the team around the Country and get news from them and provide to you instantly.
Share
Facebook
Twitter
Pinterest
WhatsApp
Previous articleCoronavirus Pakistan Latest Updates | Cases | Deaths | Precautions |
Next articleTreating Coronavirus at home during the initial stage before hospitalization