Meanwhile, his family sources said that Lt General (retd) Shahid Aziz is in Africa for preaching.

Recently in a statement, the former Army Chief General (retd) Pervez Musharraf said that Lt General (retd) Shahid Aziz had grown a beard and gone to Syria, and according to some people, he had been killed there. 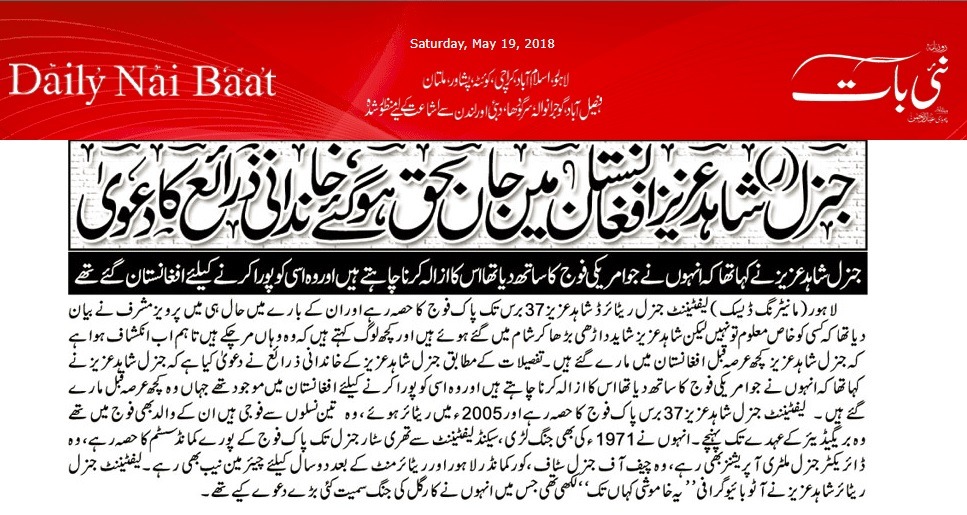 Lt General (retd) Shahid Aziz served in Pakistan army for 37 years and retired in 2005. While being in Pakistan army, he remained as the DGMO, the Chief of General Staff and Corps Commander Lahore.

After his retirement from Pakistan army, Lt General (retd) Shahid Aziz was appointed as the Chairman NAB – Pakistan’s apex anti-corruption organization – in November 2005 by the then President Pervez Musharraf.

However, he resigned after two years on moral principles when he was asked to close all cases of the former Prime Minister Benazir Bhutto and her husband Asif Ali Zardari amid back-channel negotiations between Pervez Musharraf and Benazir Bhutto prior to the passing of the National Reconciliation Ordinance (NRO).

However, according to senior journalist Ansar Abbasi, Lt General (retd) Shahid Aziz’s son talked to him via phone and denied the authenticity of the news about his father’s death.

Just got a call from Gen (R) Shahid Aziz’s son, who says all stories about his father are “fake”.

Mati
Mati-Ullah is the Online Editor For DND. He is the real man to handle the team around the Country and get news from them and provide to you instantly.
Share
Facebook
Twitter
Pinterest
WhatsApp
Previous articlePEMRA orders TV Channels not to air VOA, BBC and Deutsche Welle programmes
Next articlePM Khaqan Speech at 7th Extraordinary OIC Summit on Palestine in Istanbul