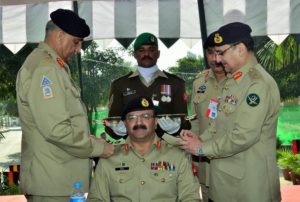 His appointment was made by the Chief of Army Staff (COAS) General Qamar Javed Bajwa when he visited the Mujahid Force Centre at Bhimber on Friday, said a press release issued by the Inter Services Public Relations (ISPR).

A large number of serving/retired officers including from the force were present at the occasion.

Later while interacting with Officers and soldiers of the force, the COAS appreciated contributions and sacrifices of Mujahid Force particularly along the Line of Control (LoC).

Mati
Mati-Ullah is the Online Editor For DND. He is the real man to handle the team around the Country and get news from them and provide to you instantly.
Share
Facebook
Twitter
Pinterest
WhatsApp
Previous articleAir Chief meets PM Imran Khan
Next articlePTI, PML-Q to jointly cope with negative propaganda of opposition