ISLAMABAD, Pakistan: The fast-turning grave situation in the Federal Capital’s suburb area of Bhara Kahu following the detection of Coronavirus (COVID-19) Cases in five members of a Tableeghi Jamaat has compelled the administration to impose a lockdown in Kot Hathial for an indefinite period.

The panic and fear prevailed in the entire vicinity of Kot Hathial area of Bhara Kahu on Saturday after news surfaced that a foreign member of a Tableeghi Jamaat staying at Bilal Masjid had Coronavirus Symptoms.

Subsequently, a team led by the Assistant Commission (AC) Islamabad Asadullah took suspected people of the virus to the Pakistan Institute of Medical Sciences (PIMS) wherein samples of five of them were taken for testing and all of them were found positive.

Therefore, the entire Kot Hathial area has now been locked down to curtail the spread of the COVID-19 while samples of six more persons from the same Tableeghi Jamaat have been taken.

ASP Hmaza with team sealed Kot Hathial Bhara Kahu.
ICT Police & ICT Administration leading from the front to save the lives of citizens.
You are requested to cooperate with us.#CoronaFreePakistan pic.twitter.com/NJnSIak9Lo

Sources said that 13 members of a family residing in the neighborhood have also been tested positive for the virus; however, it is yet to be confirmed by the official sources.

As per the notification issued by the Islamabad District Magistrate Mohammad Hamza Shafqaat, the initiative has been taken in the view of an alarming increase in the number of Coronavirus Cases in the Federal Capital.

The notification states that a complete ban has been imposed in Kot Hathial under the Epidemic Disease Act 1958 on the movement/entry and exist/missing/gathering of people until further orders.

However, people with certain conditionalities will be allowed to move around while Pharmacies, Hospitals, and Medical Stores will remain open. 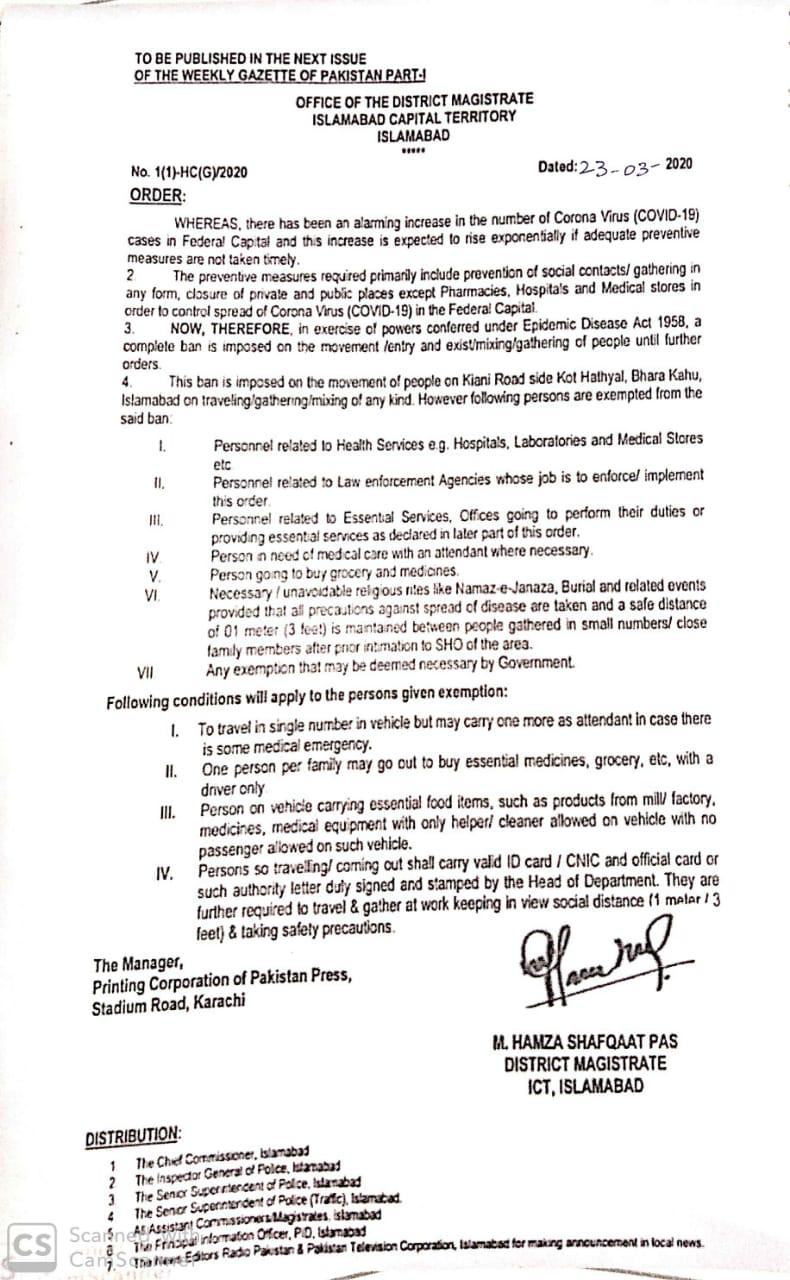 Meanwhile, warnings were issued through speakers apprising the local residents about the restrictions and asking them to stay at their homes.

The National Institute of Health (NIH) workers also reached every nook and cranny of the area and educated the dwellers about the preventive measures against the COVID-19.

Mati
Mati-Ullah is the Online Editor For DND. He is the real man to handle the team around the Country and get news from them and provide to you instantly.
Share
Facebook
Twitter
Pinterest
WhatsApp
Previous articlePresident Arif Alvi Confers Military Awards on Pakistan Day
Next articleFM Qureshi discusses COVID-19 Pandemic with his Maldives Counterpart on phone