Locations of cremation grounds & graveyards of minorities in Islamabad

NationalLocations of cremation grounds & graveyards of minorities in Islamabad
National
By Mati
July 29, 2022

The Capital Development Authority (CDA) has allocated lend for cremation grounds and graveyards for different minorities in Islamabad.

As per the details shared with the National Assembly on July 29 by the Minister for Interior Rana Sana Ullah, two cremation grounds are located in H-9 for Hindu and Buddhist Communities. 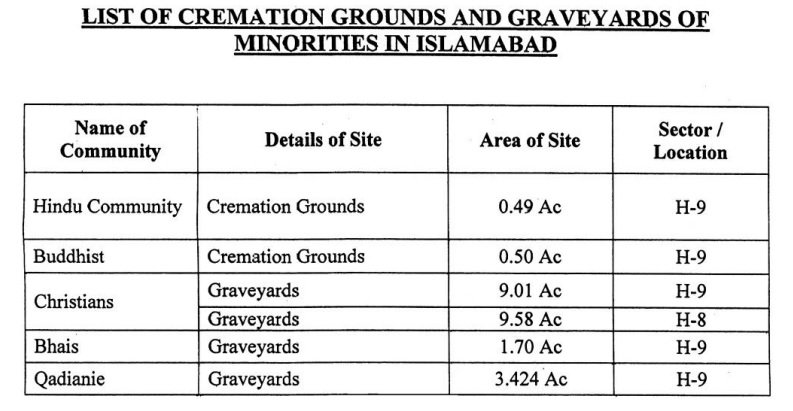 Replying to a question about whether the CDA is developing a Christian Housing Colony in Islamabad, the House was told that the Capital Development Authority is not developing any housing scheme on religious discrimination basis.

It was apprised that all the societies developed or to be developed in future are for all citizen of Pakistan.

However, housing projects for low-income groups is under construction with title of Naya Pakistan Housing in Farash Town, Zone-4, Islamabad.

Also Read: Names and locations of archaeological sites in Islamabad

The House was apprised that the total cost for development of Pakistan Movement Park along with History Museum is Rs 42.278 million.

The migration during the sub-division of India and Pakistan is reckoned to be the largest of the history. It will help the new generation to become aware of their history.