Following story was posted prior to the beginning of third T20 between Pakistan and Sri Lanka at Gaddafi Stadium in Lahore on October 29, 2017.

Lahore is blessed to host an International Cricket match for the fifth time in 2017, which will be streamed live on PTV Sports, following an eight-year deprivation as Pakistan and Sri Lanka end their bilateral series with the last T20 at Gaddafi Stadium in Lahore on Sunday evening.

It’s simply more than just Cricket for wretched Pakistan which has been striving hard to revive its peaceful environment and wants to prove its success by bringing International Cricket back into the Country.

Starting with Zimbabwe tour to Pakistan in May 2015 which consisted of three ODIs and two T20s. Pakistan Cricket Board (PCB) has succeeded to convince International Players to visit Pakistan twice this year with little hiatus – first for Pakistan Super League (PSL) final and then for Independence Cup.

However Sri Lanka’s tour to Pakistan carries even further significance as not only Islanders are a mighty Test side well potentially recognized worldwide. But they belonged to the same foreign contingent which survived a terrorist attack in March 2009, marking the vanishing of International Cricket in Pakistan for years.

Sri Lankan team led by Thisara Perera has already reached Lahore. Meanwhile, areas surrounding the Gaddafi Stadium are being well guarded with the deployment of thousands of security personnel. While air surveillance and intelligence monitoring are also in place to ensure foolproof security.

If Pakistan is battling for its very peaceful existence, Sri Lanka is also embattled to break its losing streak which has now stretched to 15 games including 12 ODIs and three T20Is.

In the last T20 played in Sharjah on October 27, Sri Lanka was just about to turn the tide in its favour but Shadab Khan’s last over blitz steered Pakistan to series win.

Though as per reports, Usman Khan has suffered an injury and is likely to be replaced with Muhammad Amir for third T20 but yet Pakistan is confident enough to register another back-to-back whitewash against Sri Lanka. 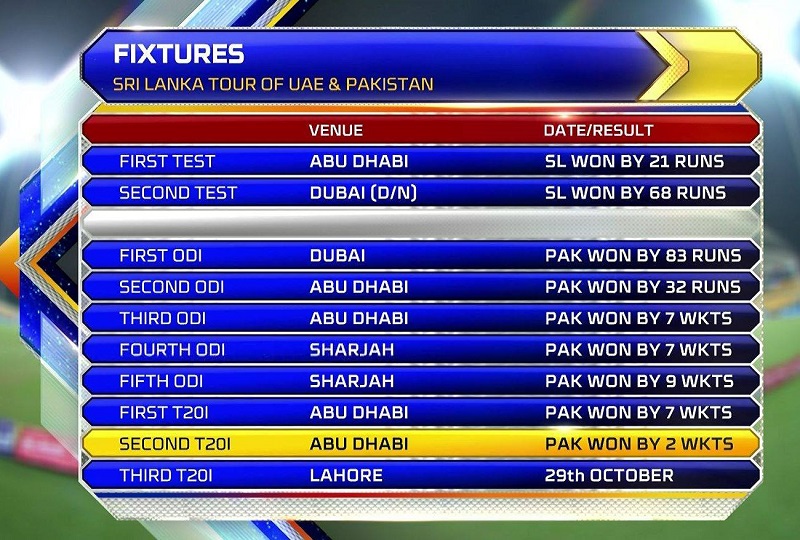 Mati
Mati-Ullah is the Online Editor For DND. He is the real man to handle the team around the Country and get news from them and provide to you instantly.
Share
Facebook
Twitter
Pinterest
WhatsApp
Previous article
Battle continues between Taliban and Daesh in Khogyani district of Nangarhar province
Next article
Flawless security arrangements at Gaddafi Stadium Lahore for T20 International Match Final
Share
Facebook
Twitter
Pinterest
WhatsApp