Editor’s Note:
The development of civilizations, their rises, and falls, as well as interconnections and impacts onto the lives of the successors is an extremely interesting issue. It is still waiting for further research, otherwise, we’ll never understand the similarities found out in Trypillya culture and Indus valley civilization. This year, on his 170 anniversary, we pay a tribute to scholar and archeologist Vikentiy Khvoyka (Хвойка Вікентій В’ячеславович), who discovered Trypillya and dedicated his whole life in excavations in Ukrainian lands to explore rich Ukrainian culture.

No one still knows why this is the fate of man, and not otherwise?
Some believe in the will of the Almighty, some – in the coincidence of numerous circumstances.
The life of the famous Ukrainian self-taught archeologist of Czech origin Vikentiy (Cheslav) Khvoyka (Born 21 February 1850 and died on 20 October 1914 (read in old calendar as November 2) resembled an incredible intricacy of the two.
Khvoyka was born into a noble family, had been educated at the commercial school in the Czech Republic.

While in Prague, he became interested in ancient history and antiquities, also, studied common European languages. Everything went quite positively. However, suddenly fate made a sharp turn, and Khvoyka at the age of 27, moves to Kyiv. Unknown to anyone at that time, he first taught German and drawing, and later engaged in agronomic work on growing new varieties of millet and hops.

The results of the work were quite successful. Khvoyka seemed to have found his place in life. Suddenly there was an unfortunate accident and at the same time defining “case” that radically changed his future life. What happened? Not far from Kyiv, a laboratory where a young scientist was conducting his experiments burned down.

The fire burned all his records, analyzes, drawings, and even awards. There was no end to despair. Suddenly, on fire in the ground, the researcher noticed the remains of multicolored glass bracelets. Due to a lack of money, Khvoyka decided to sell the finds. Kyiv experts on antiquities explained to him, that such bracelets were worn by women from the times of Kyivan Rus.

This instantly ignited Khvoyka’s long-standing passion for history and archeology. So, it happened that 43-year-old Khvoyka decides to put an end to agronomy and dedicate himself to his favorite archeology.
During the period of 1893 to 1914, Khvoyka was busy in researches and archeological excavations of the monuments of almost all epochs of historical development on the territory of Ukraine.
His excavations cover the territories of modern Kyiv, Cherkasy, Poltava, Sumy, Zhytomyr and Khmelnytsky regions.

One of the numerous archeological discoveries of Khvoyka was the one in 1893 in a section of a mountain on the Kyryllov Heights in Kyiv at a depth of 19 metre of mammoth bones, tusks, spearheads, bone incisors, etc. Professor of Kyiv University V. Antonovych advised Khvoyka to continue the investigation and search for other evidence of the presence of ancient people here.

He followed the advice, and this search was very successful: up to 67 mammoth skeletons were found, as well as flint products. All this was evidence of the Paleolithic site, which existed almost 20,000 years ago at the Kyryllov Heights in Kyiv.
Perhaps it would not be an exaggeration to say that the discovery of Trypillia culture began in Kyiv, namely in the Kirillov place. Original ceramic vessels with intricate patterns, clay figurines of people and animals, weapons made of stone and horn – such findings have not yet occurred to archaeologists.
In 1895, during the excavations on Kyryllivska Street, during the removal of the upper layer of the mountain, located in the estate of Mr. Zival, the workers constantly came across thick clay shards. Considering one of them, Khvoyka was surprised by the composition of the clay, and even more by the originality of the ornament on it.

Various finds were made in rooms resembling dugouts. Initially, the researcher believed that these were primitive dwellings. On the territory of Froliv Hill on the way to the Kyryllov Monastery, more than 70 such “dugouts” with recesses for hearths, to which stairs led, were opened. The walls were woven and smeared with clay.

Many remnants of pottery painted in red and black were found. As it turned out later, such pottery is typical of the culture of Trypillia. And later it was proved that these premises are not dwellings, but pottery kilns of Trypillia residents.

Working on his findings, Khvoyka came to the conclusion that the representatives of such a culture had to live lower down the Dnieper. So, with all the inspiration he began to search in the vicinity of the villages of Kyiv region – Trypillya (the name “Trypillya culture” comes from the name of this village), Halepya, Veremya and others adjacent to them, where he found the remains of ancient villages with numerous originally painted utensils, many various statuettes, arrows, spears, etc.

Khvoyka devoted several years to these excavations. The study provided that the artifacts found date back to the 4th millennium BC! It was a world-level discovery. The work of Khvoyka and his assistants was truly ascetic, because archeology is a rather expensive science. Khvoyka’s admiration and job was mostly based on wealthy Kyiv patrons – famous Khanenko and Tereshchenko families, with whom Khvoyka had friendly relations. So, he tried his best to compensate their expenses with discoveries, and his founds went mostly to the private collections of his sponsors.
All these investigations showed that a self-taught archaeologist is a truly talented researcher, proved that this person is capable of self-improvement and professional growth. In fact, Khvoyka constantly tried to learn more, read many profile letters persistently studied the history and territory of Kyiv and the region, as well as the territory of other regions.

Later, he discovered several more Paleolithic sites in Kyiv on the Protasiv Yar tract, in the village of Selishche in the Cherkasy region, and elsewhere. Numerous finds of the researcher also include cemeteries of two archeological cultures – Zarubynets (II century BC – I century AD) and Chernyakhiv culture (III-V centuries AD). They were discovered on the banks of the Dnieper river in the village of Zarubyntsi near Kaniv and in the village of Chernyakhiv near Kagarlyk. They proved the significant influences of Celtic and Provincial-Roman cultures in the depths of South-Eastern Europe.
An interesting find is also the remains of the foundation of a brick princely palace from the times of Kyivan Rus on Starokyivska Hill near the oldest Church. Bricks with the image of a trident and the remains of jewelry workshops of that time were found here, and later – even a large mass grave of the victims of the Mongol-Tatar invasion in 1240.

And this is not a complete list of his discoveries. As long as his health allowed, the researcher discovered up to ten new archeological sites each summer. Also, he wrote ten scientific papers, based on the results of his excavations, Of course, in some of his conclusions, the self-taught archaeologist could be wrong, but aren’t eminent professional scientists guilty of this? Actually, this is a natural process. Some even believe that the work on errors could advance science.
It is gratifying that Vikentiy Khvoyka, although a Czech by nationality, passionately loved Kyiv and considered it his second homeland. He dreamed that everything he found and gained would remain right here in Kyiv. Fortunately, most of the collections he acquired are still stored in the National Museum of History of Ukraine. By the way, Khvoyka dedicated almost 20 years of his life to this Museum.

The researcher died on November 2, 1914, and was buried in Baikove Cemetery. People of Kyiv honored the memory of the scientist-archaeologist with a memorial plaque on the street Borysoglebskaya 1, also, one of the streets in Kyiv’s Podil district is named after him. 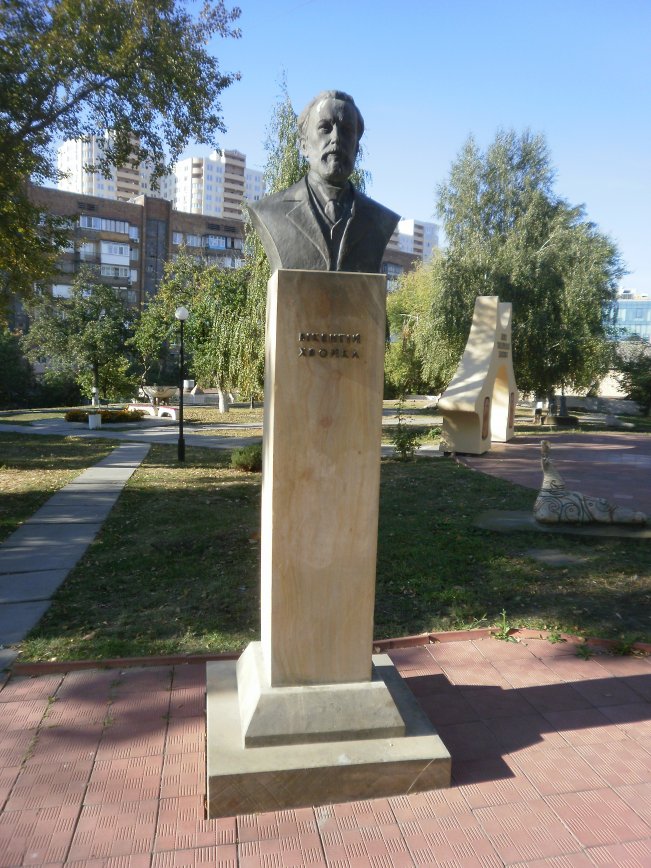 Today, we once again remember the outstanding researcher and bow our heads in gratitude to his memory.

Khvoyka had revealed to the world Trypillia culture in Ukraine. His works, his collections and incredible passion as a researcher have inspired and will inspire many generations of scientists to further study of our ancient history, so rich and interesting.