According to Russian media, Russian Foreign Minister Sergei Lavrov who held a trilateral meeting with Chinese Foreign Minister Wang Yi and Indian Foreign Minister Sushma Swaraj, suggested India to join OBOR and stated that he understands (understood) Indian reservations over the project but the specific problem (CPEC) in this regard should not make everything else conditional to resolving political issues.

India refused to attend first Belt and Road Forum for International Cooperation in Beijing in this May which was attended by over 70 countries including United States, Russia and EU delegations. India claims that CPEC project which is flagship project of OBOR goes through disputed land inside Pakistan. 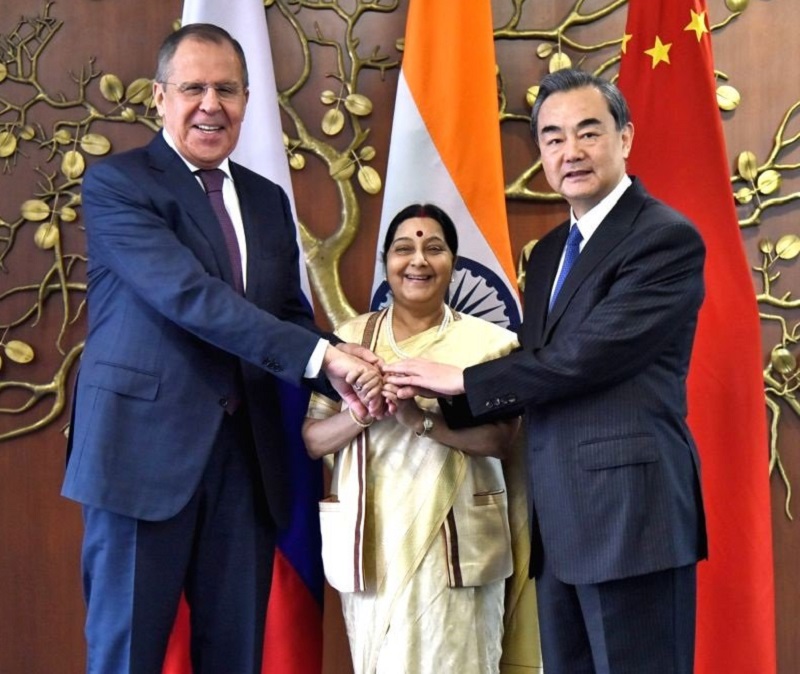 It is pertinent to mention that 15th Meeting of the Foreign Ministers of Russia, India and China (RIC) took place in New Delhi today where Lavrov added that Russia and many other countries in Central Asia and Europe have signed up to take benefit from OBOR and India should not stand alone.

“Russia, India and China have a common vision of the direction in which the world should move. Each of us wants to see the world polycentric– on the basis of international law and respect for the principles of the UN Charter”, said Lavrov while talking to Russian media after his meeting with Indian Foreign Minister.

He also stated that Russia, India and China are ready to share their experience with other countries in the fight against foreign terrorists and the financing of terrorism.

According to Lavrov, during the meeting of the RIC, the sides underscored the absence of alternatives to the fight against terrorism in all its forms and manifestations, including the spread of the terrorist ideology.

We are convinced of the relevance of the unique experience of antiterrorist cooperation in the SCO, within the framework of which a convention on counteracting terrorism has been adopted,” the Russian Foreign Minister said

Lavrov also delivered a lecture in New Delhi in which he noted that 16 years of military presence of NATO in Afghanistan failed to defeat terrorists and to minimize narcotic threat. Lavrov sharpened the audience’s attention to the fact that drug production in the territory of Afghanistan reached a “historic high” this year.
“I do not think that the US strategy on Afghanistan, which emphasizes the use of force to defeat those who will not cooperate, will work.