Lahore Smart City Location is a prospective project that has been launched in the inflating urban landscape of the Capital city of Punjab. The fast-spreading urban development of Lahore demands a high prolific real estate project like Lahore Smart City, which has set new records of development in the heart of the metropolitan city.

The swiftly achieved construction work with potential backend recruitment of approximately 300 to 400 heavy and small machinery. Another alluring quality exhibited by Lahore Smart City in this regard is the accessibility towards 5 core road links making it approachable from major points of inner Lahore.

The matter of power generation has become one of the most highlighted factors in these times due to the shortage of energy sources. Fortunately, extensive land has been specified for building a grid station of 132 KV in the vicinity of Lahore Smart City. It will act as a powerhouse for the whole residential project and will eradicate the problem of electricity shortage.

Approval has also been achieved for uplifting direct access from the railway underpass. The constructors have also focussed on completing the project of the main boulevard as soon as possible. The road has planned to be 3000 ft. in length and 150 ft. in width that will dispense convenient transportation and widespread array to the housing colony. 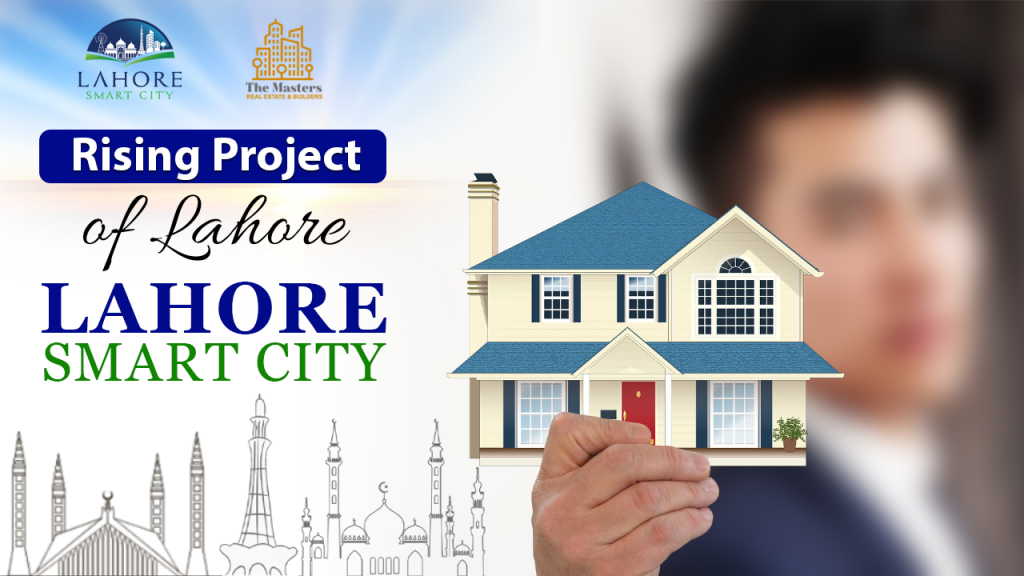 The promising feature of the availability of an eco-friendly environment has been maintained by occupying a dedicated nursery area for the plantation of infinite greenery. The grand launching ceremony of Lahore Smart City has been announced and the task of construction is progressing at a lightning-fast pace.

The revolving news regarding Lahore Smart City has confirmed the allocation of approximately 20 thousand Kanal of streamlined property across Lahore bypass. The development of this residential venture has been inaugurated with all its grandeur.

The Masters Real estate has marvellous news for the dearest readers and customers that the NOC of Lahore Smart City is soon to be approved by the Lahore Development Authority.

Lahore Smart City is a perfect amalgamation of high specifications with reasonable prices. Due to this reason, investors are looking forward to investing in this prestigious project. The project has ranked as the second smartest city of Pakistan after Capital Smart City. FDH and HRL are renowned for the accomplishment of highly esteemed real estate projects.

HRL is the real presence of the iconic face of the real estate sector of Pakistan. HRL has come a long way to attain this destiny with their honest and dedicated work. They have served as one of the best professional service providers in the field of construction. Their group has set enormous precedent projects in various districts for more than 40 years.

The indigenous project of Lahore Smart City has instilled the popular company of Future development holding Private Limited in their developers. It is an organizational institution that was first registered under the companies ordinance of 1984. The company is the cooperative project of two huge organizations.

The first one is Engineering Dimensions Pvt. The limited and second one is China Liaoning International Economic and technical cooperation Group Corporation Ltd (CLIC). These two companies have played a pivotal role in modifying the face of Lahore Smart City as they have specialized traits of leadership and technical skills.

The major consulting partner that has participated in polishing the project of Lahore Smart City have mentioned below:

Lahore Smart City location has been added as one of the most enticing features that have kept the investor’s eyeball rolling for this mesmerizing smart city. The prime location of Lahore Smart city Commercial Plot is strategically located on the right side of the Kala Shah Kaku Railway Station which is near N-5 National Highway and Lahore bypass.

All the major highways of Pakistan are also approachable from Lahore Smart City, these include M2 Lahore Islamabad Motorway, GT road, and Lahore-Sialkot Motorway.

Another alternative route leading to LSC is from Lahore Ring Road. It will assist the inhabitants of Lahore Smart city to reach the main points of Lahore at a driving distance of a few kilometers.

Although Lahore Smart City has occupied a bit outer vicinity of Lahore city the main idea behind this is to facilitate the residents with a peaceful environment. But the developers have passed the project with a keen eye to make it accessible from all major portions of Lahore.

Following core points is nearby Lahore Smart City location map that is bustle-free and will provide access to:

The characteristics of the Master plan of Lahore Smart City have not yet been revealed properly. The clear information regarding the master plan is opening with the passage of time and Masters real estate is there to provide our clients with all information. The number of the plot offered by Lahore Smart City are limited in number.

The sizes of residential plots available overseas and executive block comprise of:

The commercial plots allocated in overseas and executive block of Lahore Smart City consists of the following sizes:

The blocks or districts of Lahore Smart City have launched with innovative style to provide luxury living standards.

The developers of Lahore Smart city have planned the project with multi-dimensional criteria to make the plate servable for all categories of society. The alluring features of the overseas block have balanced the society with the tantrum of the executive block. Besides these blocks, there are a few other crucial blocks that have added the essence of an internationally recognized society to Lahore Smart City.

As the name indicates, Lahore Smart City has allocated the executive block for classy residents furnished with elite-class facilities. The executive district has dispensed with all basic and upper life utilities. The architectural scheme approved for an executive block of Lahore Smart City has rendered the block with 24/7 electricity, furnished apartments, parks, jogging tracks, mosques, retail shops, and much more.

The major difference owned by the executive block is that the amenities are a bit fancier, and the plot prices are a bit higher as compared to the general block. The residential plots are worth buying due to top-notch gateways towards ultra-advanced and smart facilities.

The General Block of Lahore Smart City has accommodated a huge number of residential plots that have been priced reasonably.

The constructors of Lahore Smart City have focussed critically in providing plot to families having mediocre income status. Consequently, folks desiring to enjoy the liability of elite and smart life are now eligible to get their plots booked in this smart city.

The amenities designed to provide in a general block of Lahore Smart City have encircled all the facilities of a healthy lifestyle. The environment-friendly atmosphere with all the educational, health and transport facilities have been instilled in this block that will serve the residents with a soothing and peaceful atmosphere.

The overseas block comprises residential and commercial plots, which will make way purchasing the plots more convenient for foreigners and overseas Pakistanis. The intention behind the establishment of this block is to make the future of families of overseas Pakistanis brightest by settling in this recognized project.

The overview of developers is to provide a lavish and reliable society that will meet the requirement of international living. The overseas block has been laid down with a firm foundation that will furnish the overseas Pakistanis with the guaranteed land, amenities, and utilities. The investors having dual nationality or living outside Pakistan are eligible to get their plots in this prideful residential project.

A piece of happy news has been announced on the official page of Lahore Smart city that the developers have successfully revised the whole rate list of various sizes of the plot.

Lahore Smart City has fixed its position as a highly profitable project in a very short time. The clients looking forward to extracting an ample amount of profit in short tenure should invest in Lahore Smart City.

The authorities of LSC have cautiously designed the payment plan that will prove to be a potential decision in the coming years. The establishment of the plot in this mega Smart city project will go to be the pioneer of a flourishing and thriving housing colony.

An outline clarifying the payment plan of Lahore Smart City that will assist you in making an estimate is here:

The booking of plots was confirmed on a down payment of 10% proceeded by 10% confirmation charges. The installment plan has feasible traits with a 14 month long extended period.

The feasibility penetrated in the installment plan of Lahore Smart City is a major facet in attracting an immense number of investors. The negligible booking amount of 20% will initiate the booking process. The prices are exclusive of developmental charges. The 14 quarterly installments payable after three months have demolished the stress of one-time payment of installment every month.

The owners and developers of Lahore Smart City intend to equip the occupants of this residential project with a relishing lifestyle. The collaborative approach to provide the inhabitants with innovative technology and representation of smart features has embarked the society with attractive features. Some crucial facilities available in this society have mentioned below:

Lahore Smart City housing and commercial plots have become the talk of the town as they have launched recently with a minimal window of time and have affordable and low-cost prices. Hence, keep in touch with the competitive and experienced representatives of Masters real estate for all recent updates and to avail this opportunity.