ISLAMABAD, Pakistan: The Ambassador of the Republic of Kyrgyzstan to Pakistan Ulanbek Totuiaev called on the Federal Minister for National Food Security and Research Tariq Bashir Cheema in Islamabad on Wednesday.

During the meeting, both sides discussed the trade potential of agricultural products between the two Countries.

Ambassador Ulanbek Totuiaev said that the business community of Kyrgyzstan is keen to import agricultural products from Pakistan, especially mangoes and kinnows. While they look forward to tapping into Pakistani market by exporting their agricultural products, he added. 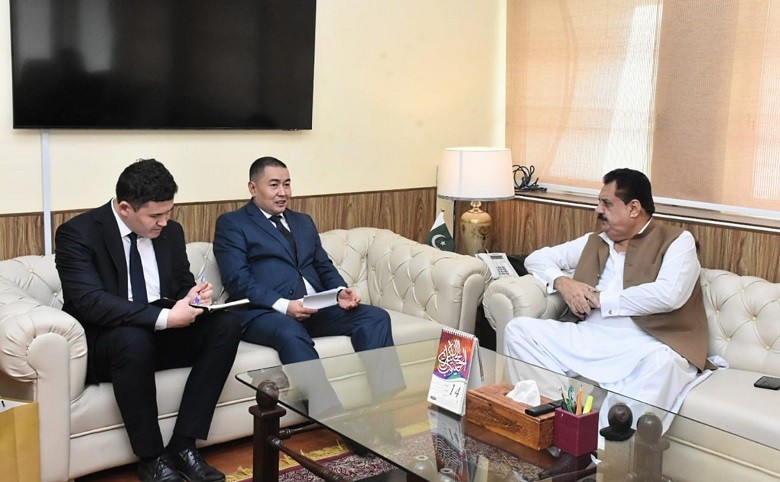 Tariq Bashir Cheema said that officials from the both sides can discuss the required facilitation and build the required framework for trade between the Pakistan and Kyrgyzstan. He said that he is interested in fully utilizing the trade potential with Kyrgyzstan in agriculture and livestock.

The federal minister directed the relevant officials at the Ministry of National Food Security and Research to assess potential avenues to boost trade and cooperation with Kyrgyzstan.

The Kyrgyz Ambassador Ulanbek Totuiaev invited the Federal Minister Tariq Bashir Cheema to take part in the next Joint Working Group which will be organized by the Ministry of Commerce to enhance regional economic trade between Pakistan and Kyrgyzstan, to explore the options and means to ensure food security in the both Countries.

Tariq Bashir Cheema said that Pakistan will take all the necessary steps to ensure food security in the Country.

Ambassador Ulanbek Totuiaev apprised that the government has recently changed in Kyrgyzstan which is actively pursuing the direction of growth in agriculture, science and technology, and education. He said that many opportunities of fruitful cooperation exist between the two Countries.

The Kyrgyz ambassador that Pakistan and Kyrgyzstan share friendly relations based on strong historical ties. He said that there are a significant number of Pakistani students studying in the universities of Kyrgyzstan.

The minister said that Pakistan places great importance to its relation with Kyrgyzstan and hoped that it will get stronger with time.

Mati
Mati-Ullah is the Online Editor For DND. He is the real man to handle the team around the Country and get news from them and provide to you instantly.
Share
Facebook
Twitter
Pinterest
WhatsApp
Previous articleYoungest Pakistani Youtuber Gets a Diamond Play Button
Next articlePM Shahbaz lauds role of Aga Khan Development Network institutions in Pakistan