RAWALPINDI, Pakistan: The Ambassador of Extraordinary & Plenipotentiary of the Kyrgyzistan Erik Beishembiev to Pakistan visited Rawalpindi’s General Headquarters and called on the Chief of Army Staff (COAS) General Qamar Javed Bajwa on Tuesday.

In a statement, the Inter Services Public Relations (ISPR) said that matters of mutual interest including regional security issues were discussed during the meeting.

The visiting dignitary acknowledged and appreciated Pakistan’s continuous efforts and sacrifices for peace and stability in the region. 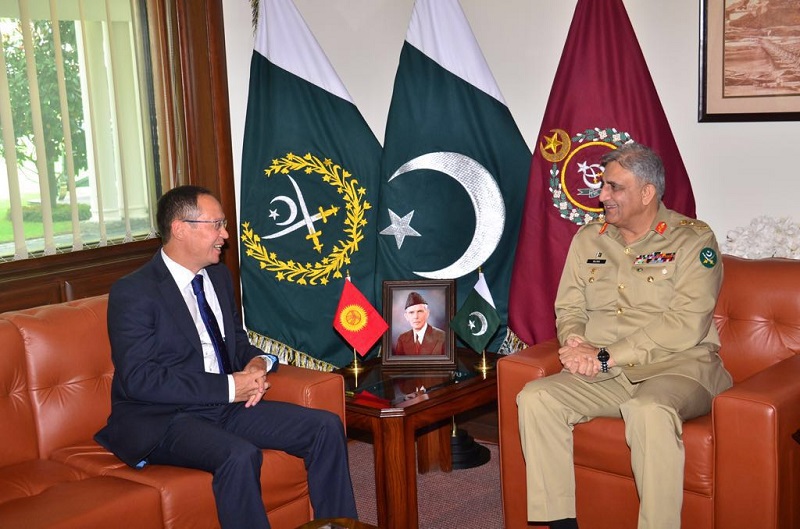 Kyrgyzstan and Pakistan are members of Shanghai Cooperation Organisation (SCO) and share mutual vision about security in the region.

Ambassador Erik Beishembiev was appointed in February 2017 in Pakistan and he is proactive to enhance bilateral relations. He served as Director General of the 1st Political Department (including & China) of the Ministry of Foreign Affairs of the Kyrgyz Republic and deeply understand regional foreign affairs.

Mati
Mati-Ullah is the Online Editor For DND. He is the real man to handle the team around the Country and get news from them and provide to you instantly.
Share
Facebook
Twitter
Pinterest
WhatsApp
Previous articleMuhammad Jehanzaib Khan appointed as Chairman FBR, Muhammad Suleman Khan as DG IB
Next articleAral Sea summit: Central Asian States agree for coordinated joint actions to revitalise Aral Sea