KUALA LUMPUR, Malaysia: The three-day Kuala Lumpur Summit 2019 with the theme “The Role of Development in Achieving National Sovereignty”, kicked off in the Malaysian Capital on Thursday, aiming at to address the state of affairs of the Muslim Ummah.

In the Summit, Muslim leaders, intellectuals and scholars from around the world will discuss and exchange ideas about the issues revolving in the Muslim world.

Prime Minister of Pakistan Imran Khan, who has been very vocal for the Muslim world and been raising the issues i.e Islamophobia at all international forums including the United Nations, was also highly anticipated to attend the Kuala Lumpur Summit but just days before the event, he backed off.

Imran Khan formally informed his Malaysian Counterpart Mahathir Bin Mohamad via telephonic conversation on December 16 about his decision, and expressed his regrets for not being able to attend the Summit to be held from December 18-21.

Earlier it was being reported that the Foreign Minister Shah Mahmood Qureshi would represent Pakistan in the Summit in the absence of Prime Minister Imran Khan; however, even the former also eventually withdrew his decision, as reported, to travel to Kuala Lumpur.

The decision by the Pakistani leadership from staying away from the Kuala Lumpur Summit stunned many as it was Prime Minister Imran Khan who had floated the idea of making  efforts especially by Pakistan, Turkey and Malaysia from a joint platform to raise the voice of Muslims across the World in an effective manner. 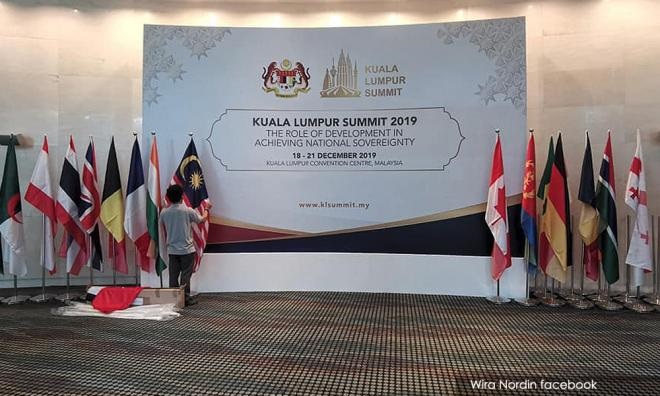 In his royal address at the opening of the Kuala Lumpur Summit 2019, the Malaysian King Sultan Abdullah urged those present to seek knowledge, strive for good governance and adapt to globalization so as to move the community forward in a challenging and rapidly changing world.

“Today, collectively, Islamic countries have come a long way, with great achievements. Yet, we are confronted by some of the most difficult challenges of the developing world. Many segments of our communities are still victims of poverty and underdevelopment. Basic necessities of food and shelter remain elusive to many,” he was quoted as saying by Xinhua News Agency.

The Malaysian King Sultan Abdullah said that solving these challenges is a “daunting task” which requires their major “undertakings.”

“However, I believe this should not hinder us from our efforts towards our noble goal of achieving unity amongst our diverse but yet rich and vibrant communities,” he added.

The Malaysian Prime Minister Mahathir Mohamad told delegates that the Islamic Countries needed to build up themselves and strive to be self-sufficient while cultivating close and mutually beneficial ties in order to maintain their sovereignty and resist undue foreign pressure, whether through economic or military means.

The Turkish President Recep Tayyip Erdogan, the Iranian President Hassan Rouhani and the Emir of Qatar Sheikh Tamim bin Hamad Al Thani were also among the foreign heads of government who addressed delegates, with all three calling for unity among Muslim nations.

Tayyip Erdogan said that hoped the Summit will contribute to the unity of the Muslim community and strengthen its solidarity.

“From trade to politics, from foreign policy to defense industry and technology, we face figures far below our potential,” he said, urging the Islamic Countries to boost cooperation.

In the Kuala Lumpur Summit, the discussions will be framed by seven thrusts, namely national development and sovereignty; integrity and good governance; culture and identity; justice and freedom; peace, security and defence; trade and investment; and technology and Internet governance.

Mati
Mati-Ullah is the Online Editor For DND. He is the real man to handle the team around the Country and get news from them and provide to you instantly.
Share
Facebook
Twitter
Pinterest
WhatsApp
Previous articleHow to order vegetables and fruits online through Durust Daam App in Pakistan
Next articlePM Imran Khan forms Committee to facilitate Overseas Pakistanis