ISLAMABAD, Pakistan: Hailing the participation of China and Korea in the country’s historically largest afforestation programme of Prime Minister Imran Khan, the Prime Minister’s Special Assistant on Climate Change Malik Amin Aslam on said that the incumbent government is committed to work with the global community to tackle adverse fallouts of the global warming on lives and livelihoods of the people. 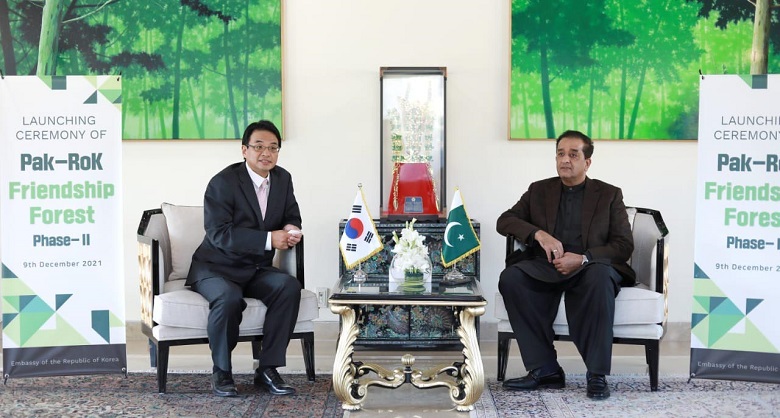 The Korean ambassador told the participants of the event that under the Pakistan-Korea Friendship Forest Initiative (Phase-II), 10,000 saplings of different fruit and non-fruit species would be planted in different parts of the Country to improve the environment and strengthen livelihoods of the local communities.

The envoy recalled that the Korean government had already planted 6,000 saplings of different varieties in support to Prime Minister Imran Khan’s TBTTP, which has gained global recognition and appreciation.

“The Korean government looks at the largest afforestation programme of the Pakistani government as an opportunity to help improve the Country’s overall environmental conditions and enhance resilience against unfolding deleterious impacts of climate change on various socio-economic sectors,” the Korean Ambassador to Pakistan Suh Sangpyo told Malik Amin Aslam during a meeting on the sidelines of the event.

Suh Sangpyo also assured the special assistant the Korean government’s all-out support to help build up the capacity of the Country’s various sectors to cope with negative impacts of climate change through transfer of technical know-how, technology related to, among others, water, energy, agriculture and forestry sectors.

Later, the special assistant and the Korean ambassador kicked off the plantation by planting a pine tree sapling at the Embassy of Korea and exchanged views on the green vision of both governments, which aims at sustainable socio-economic growth, climate resilience, environmental conservation and protection.

The Chinese Ambassador Nong Rong gifted the saplings to Pakistan at a ceremony held at the Chinese Embassy in Islamabad to mark 70 years of Pak-China friendship.

While addressing the ceremony, the Chinese ambassador said that the Chinese government strongly support Prime Minister Imran Khan’s Clean Green Pakistan vision and various world-recognised programmes and projects being implemented under the vision.

Nong Rong said further that the Chinese government shares the vision of Iman Khan and has pledged to support at all levels the green and clean Pakistan programmes and projects, particularly the Ten Billion Tree Tsunami Programme.

“Basically, gifting of the 7,000 saplings is a strong indication of the Chinese government’s faith in the incumbent government’s vision for a clean green and climate-resilient Pakistan and various programmes and projects initiated under it,” the Chinese envoy told Malik Amin Aslam.

“China also has nuclear, solar, hydro and wind power plants apart from coal power plants and can contribute to the renewable energy transition,” he added.

Highlighting the importance of the China Pakistan Economic Corridor (CPEC) project, he said Beijing had diverted one-third of its electricity to CPEC-related projects at cheaper rates.

In his address at the ceremony as chief guest, Malik Amin Aslam lauded China’s support to the flagship TBTTP programme and Prime Minister Imran Khan’s clean green Pakistan vision and hailed the gift of 7,000 saplings plantation to commemorate 70 years of friendly ties between the two brotherly Countries.

The special assistant and the Chinese ambassador jointly planted a pine tree sapling at the Chinese embassy and exchanged views on the green vision of both sides focused on sustainable growth and environmental protection.