PESHAWAR, Pakistan: The Governor Khyber Pakhtukhwa Iqbal Zafar Jhagra has convened the Session of the Provincial Assembly on August 13, 2018.

The newly elected members of the Khyber Pakhtukhwa Assembly will take oath in the Session.

In this regard, a notification was issued on Thursday which states “In exercise of the power conferred by clause (a) of Article 109 of the Constitution of the Islamic Republic of Pakistan, the Governor of the Khyber Pakhtunkhwa, has been pleased to summon the Provincial Assembly to meet on Monday, the 13th August, 2018 at 10:00 am. In the Assembly Building of the Provincial Assembly of Khyber Pakhtunkhwa, Khyber Road, Peshawar Cantonment, for take Oath of its Members, election and Oath of Speaker and Deputy Speaker and for the election of Chief Minister of the Khyber Pakhtunkhwa.”

In the 124-member Khyber Pakhtunkhwa Assembly, PTI has seized a two-third majority to form the government in the province as a result of elections 2018. 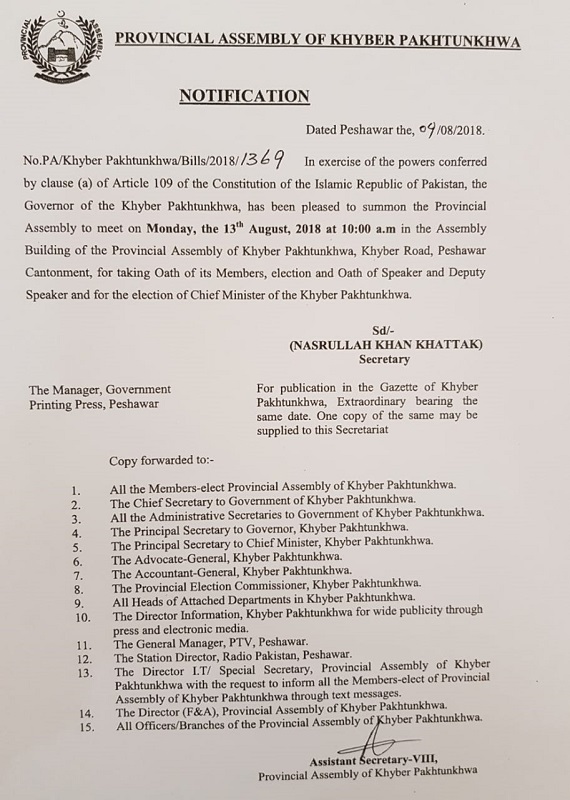 Mati
Mati-Ullah is the Online Editor For DND. He is the real man to handle the team around the Country and get news from them and provide to you instantly.
Share
Facebook
Twitter
Pinterest
WhatsApp
Previous articleInfinix S3X: Kicking It up A Notch
Next articleRussian Ambassador Alexey Dedov called on Imran Khan