ISLAMABAD, Pakistan: The Ambassador of the Republic of Kazakhstan to Pakistan Yerzhan Kistafin met the Federal Minister for National Food and Security Syed Fakhar Imam in Islamabad on Wednesday and extended an invitation to him to attend the “KazAgro/KazFarm-2021”.

Talking to the minister, Ambassador Yerzhan Kistafin said that KazAgro is a major exhibition of modern technologies, equipment, tools, and services for the production/storage/processing/logistics of agricultural products in Kazakhstan. 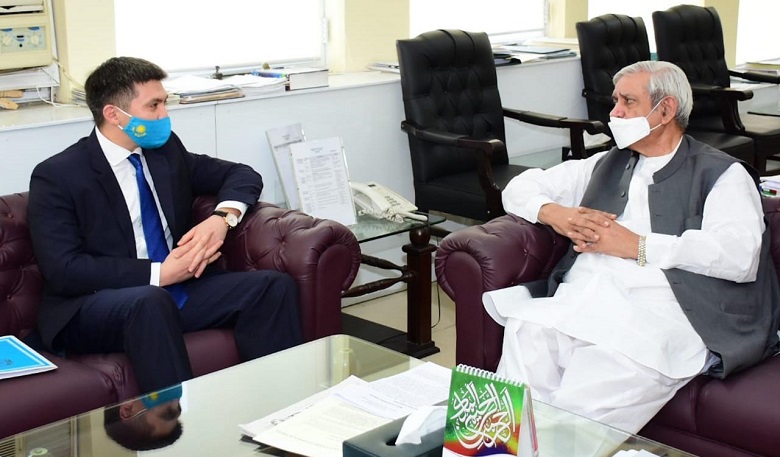 Syed Fakhar Imam said that the trade between Pakistan and Kazakhstan is approximately $60 million; however, it can be increased significantly as their bilateral trade has a huge potential to grow.

The minister said that the business community of the two Countries should have direct linkages which can lead to the transfer of relevant technologies and can lead to an increase in Federal Direct Investment (FDI) in Pakistan as well.

The federal minister said that cooperation amongst Countries at every level needs to be increased if the world wants to move towards sustainable and nature-friendly development. He further stressed that the future is in the hands of the youth and hence their quality of education needs to be at par excellence.

The minister further said that Prime Minister Imran Khan has put high priority on the development of high tech, construction, and agriculture sector. He said that technological exchange between Pakistan and Kazakhstan can enhance the agricultural sector of the country.

Fakhar said that Pakistan has an immense agricultural capacity which can allow Pakistan to increase its exports.