Is there United Nations exist which promised Kashmiris “Right of Self Determination” 71 year ago?

Burning Indian Occupied Kashmir ((IoK) is caged since August 5, 2019 and 155 daylong total communication blackout is yet to be lifted.

What is going on in IoK, nobody really knows because communication tools are totally under the control of Indian government.

Purge of Kashmiris and genocide of Muslims is the top agenda of New Delhi but Kashmiris as a resilient nation do not stop their quest to reclaim their Freedom.

Today (Jan 5, 2020), Kashmiris around the world are observing the 71st anniversary of the United Nations’ commitment that the Jammu and Kashmir dispute would be decided through the democratic method of a free and impartial plebiscite under the UN auspices.

Through this resolution, the United Nations affirmed its support for the realization of the inalienable right to self-determination of Kashmiris – a right from which all other fundamental freedoms and basic human rights flow.

Regrettably, this right has not yet been realized because of unabated repression and state terrorism by India in the Indian Occupied Jammu and Kashmir (IOJ&K). For over seven decades, human dignity of Kashmiris is being violated on a daily basis in IOJ&K.

The United Nations, especially the Security Council, bear the responsibility to ensure fulfilment of the promise of granting the right to self-determination to the Kashmiris. India’s illegal and unilateral actions of 5 August 2019 are aimed at altering the disputed status of IOJ&K and bringing about demographic change to undermine the right to self-determination of Kashmiris have been widely rejected. India’s unrestrained oppression has reached unprecedented levels with the inhuman lockdown now in place for over 150 days.

Each additional second on the curfew clock is a burden on the world’s collective conscience. The international community must act in support of the fundamental freedoms and basic human rights of Kashmiris and urge India to allow the UN Fact Finding Mission to IOJ&K to ascertain the reports of grave human rights violations there. India must allow United Nations Military Observer Group in India and Pakistan (UNMOGIP) unhindered access to carry out its duties in IOJ&K. If India has nothing to hide, it must allow international media and civil society to visit and report on the human rights situation in IOJ&K. 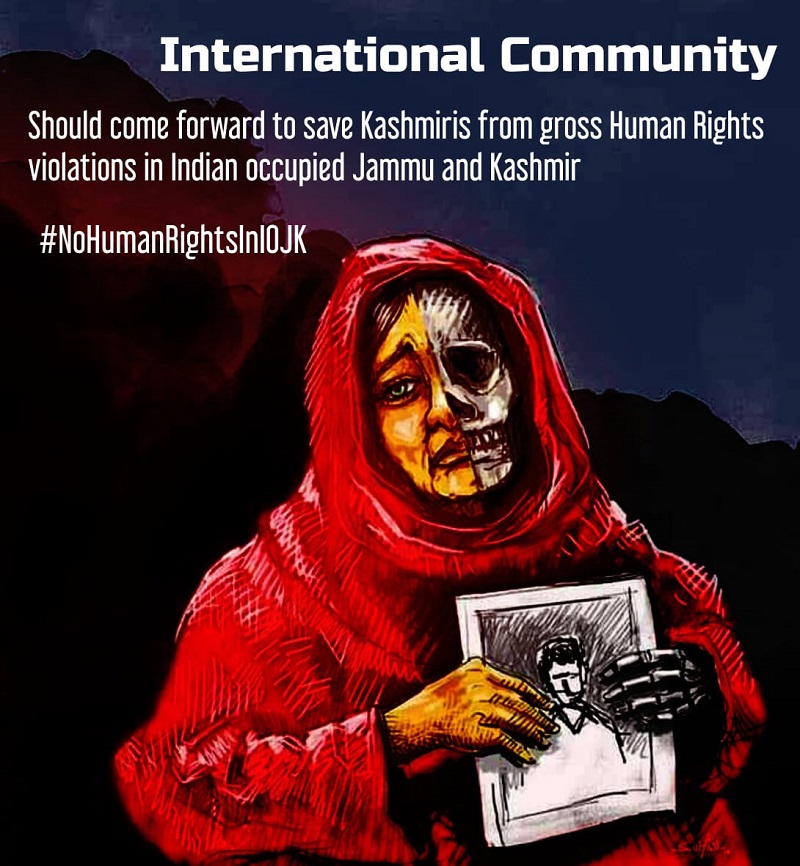 In Jammu and Kashmir state, the ruler was a Hindu, while the population was overwhelmingly Muslim and wanted to join Pakistan. India consistently pressurized the Hindu Ruler to accede to India.

Capturing the opportunity, the people of Jammu and Kashmir rose against Hindu Raja him, forcing him to flee from Srinagar to Delhi and people of Kashmir formed their own government on 24th October, 1947 all over Kashmir.

An illegal and controversial document, the Instrument of Accession was signed on October 26, 1947 between Indian government and Maharaja of Kashmir.

Maharaja obtained India’s military help against Muslims who had already announced their independence in accordance with “Indo-Pak Partition” paper which allowed Kashmiri to decide their fate.

On 27th of October, 1947, the Government of India sent forces to snub Kashmiris and occupied a large part of Jammu and Kashmir but failed to occupy whole Kashmir Valley as Kashmiri Muslims strongly fought with Indian forces.

Situation became worsen due to presence of Indian forces in Kashmir valley and India and Pakistan were engaged in war.

Sensing the gravity of situation, the then Indian Prime Minister Jawahar Lal Nehru and Governor General Lord Mountbatten (Last Viceroy of British Raj in Indian subcontinent) solemnly declared that the final status of Jammu and Kashmir would be decided by the people of the State.

This same declaration was reiterated by India at the UN Security Council when the dispute was referred to UN under chapter 6 of the U.N Charter relating to peaceful settlement of disputes.

Since then, Kashmir issue is unresolved although following resolutions were adopted by UN Security Council and by other component of United Nations.

The complaint relating to Kashmir was initiated by India in the Security Council;

The Council explicitly and by implications, rejected India’s claim that Kashmir is legally Indian territory;

The resolutions established self-determination as the governing principal for the settlement of the Kashmir dispute. This is the world body’s commitment to the people of Kashmir;

The resolutions endorsed a binding agreement between India and Pakistan reached through the mediation of UNCIP, that a plebiscite would be held, under agreed and specified conditions.