The world observed International Day of Innocent Children Victims of Aggression on every June 4 since 1982.

This day was also observed on June 4, 2020, but the United Nations and its wings including UNICEF that care children did not raise the issue of aggression of Indian armed forces in Indian Occupied Kashmir where innocent children are raped, abused, jailed, beaten and even killed. Their eye had been taken away through pallet guns and they are left without medical treatment.

The fact that UN or UNICEF did not release any statement to safeguard children of Kashmir from State-sponsored aggression is a painful question raised by several Kashmiri organisations.

Violence against children includes all forms of violence against people under 18 years old. It is estimated that over half a million children in Indian Kashmir (aged 2–17 years), have been experiencing physical, sexual, or emotional violence or neglect.

Fact-Finding Report of Krishnan from the CPI(ML), economist Jean Dreze and Maimoona Mollah of AIDWA published in August 2019 indicates grave aggression on children. Another Fact-Finding report conducted by Indian civil society members in September 2019 about Indian Occupied Kashmir (IoK) help to understand the gravity of atrocities being faced by Kashmiris in IoK.

This Report indicates that Kashmiri children (girls and boys) are being raped, sexually assaulted, jailed, beaten and abused by Indian armed forces.

Thousands of children lost their eyes in pellet guns’ attacks conducted by Indian security forces even before August 5, 2019 when the Indian government nullified Article 370 in Jammu and Kashmir (read as Indian Occupied Kashmir), and bifurcated the state.

One can find several reports released by international and Indian-based Human Rights organisations those exposed brutality faced by children in Indian Occupied Kashmir but this important and painful series of events was not mentioned by Children Rights organisation like UNICEF on June 4— International Day of Innocent Children Victims of Aggression.

If we talk about the 2030 Agenda for Sustainable Development, we know that Agenda includes to “end abuse, exploitation, and all forms of violence against, and torture of, children”. Pieces of evidence came from Indian Occupied Kashmir show that violence against children is unchecked

Most violence against Kashmiri children involves: 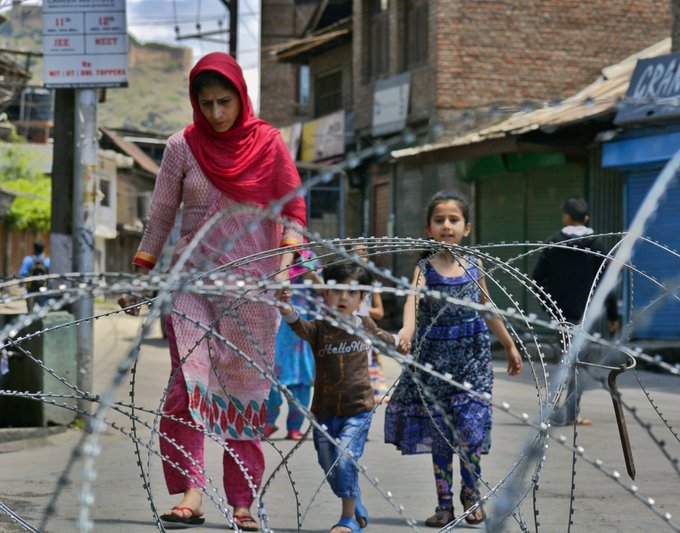 It is pertinent to mention that Emotional or psychological violence includes restricting a child’s movements, denigration, ridicule, threats and intimidation, discrimination, rejection and other non-physical forms of hostile treatment. Kashmiri children are facing a war-like situation in the most militarized region on earth—-Indian Occupied Kashmir.

Meanwhile, violence against children in IoK has lifelong impacts on the health and well-being of children and their families.

One of HuffPost reports confirmed that even school going boys had been arrested.

We met one Class 7 boy, who was arrested. He told us that there are others — younger than him — who have been arrested and who are still in custody. It’s total terror.