Kaavan: The story of the world’s loneliest elephant chained for years

BlogsKaavan: The story of the world's loneliest elephant chained for years
Blogs
By Mati
November 30, 2020

Kaavan was born in Sri Lanka in 1981. He was only four years old when the Sri Lankan government gifted him to Pakistan at the request of then-military ruler General Zia-ul-Haq. When Kaavan came to Pakistan, he was kept at the Marghzar Zoo in Islamabad, which became Kaavan’s home. Since Kaavan was the first and only elephant in the Islamabad Zoo, the people would come to see him and children would climb Kaavan and take pictures with great enthusiasm. Even Bilawal Bhutto Zardari, now chairman PPP (Pakistan People’s Party) had ridden Kaavan in his childhood. 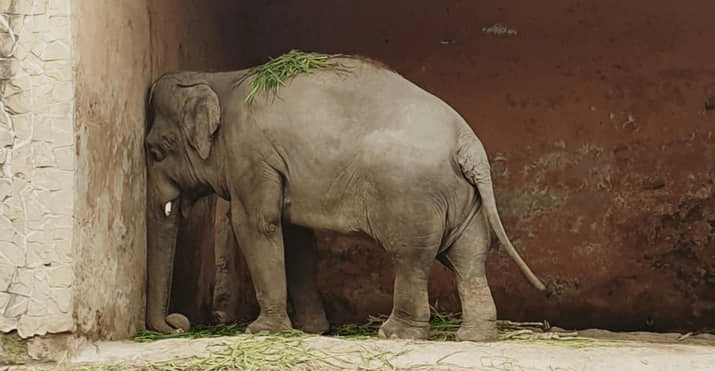 Kaavan was alone because there was no other elephant and the poor little Kaavan also needed a friend to stay with him, eat and drink and play but there are no elephants in the forests of Pakistan. After that finally, he found his friend. In 1991, the then Prime Minister of Bangladesh Khaleda Zia gifted an elephant to the government of Pakistan, dubbed as a ‘friend’. Like Kaavan, Saheli was born in Sri Lanka in 1989 and was named Manika but when she came to Pakistan, she was named Saheli.

Kaavan found his partner but just like him he too was chained like Kaavan, and they both would be chained day and night. After a while, his health began to deteriorate and the pain in his legs became so severe that the 22-year-old Saheli could not even stand up and then one day he died because of this pain. When Kaavan’s friend died, as shocking as it may sound, he and Kaavan were still in chains.

After the death, the helpless Kaavan was once again alone and left in the dark and chained. The chained Kaavan became more and more depressed due to being alone and he always shook his head from side to side in distress or hit his head against the walls and trees.

Many years passed and Kaavan continued to live in Islamabad Zoo – anxious, lonely, and chained. It was the summer of 2015 when Samar Khan and his mother who had come to Pakistan for a holiday from the United States, visited the Islamabad Zoo.

Since Samar was becoming a veterinarian at the time, she immediately realized that Kaavan’s mental health was not good. She decided that what she really needed to do was to learn how to do it right.

Samar Khan launched a campaign called ‘Free Kaavan the Elephant’ by sharing pictures of Kaavan hitting the walls on social media and appealing to the people around the world to raise their voices for his release.

Samar also launched an online petition, Free the Kaavan, which was signed by 400,000 people from around the world. Samar and those involved in the campaign wrote letters to zoo officials, the Official of Capital Development Authority (CDA), and even then-Prime Minister Nawaz Sharif, urging that Kaavan be released.

After spending 35 years in solitary confinement, Kaavan is being sent to the lush forests of Cambodia, where he will spend the rest of his life with other elephants.