Junagarh is a part of Pakistan, and Illegally Occupied by India: Syed Fakhar Imam

While addressing the conference, Fakhar Imam said that Junagarh is a part of Pakistan and has been illegally occupied by India. He said that the Junagadh community should be given special leverage.

The minister pledged that supporting Junagadh is part of our national duty. He asserted that Junagadh is an integral part of Pakistan which was illegally and immorally occupied by India. 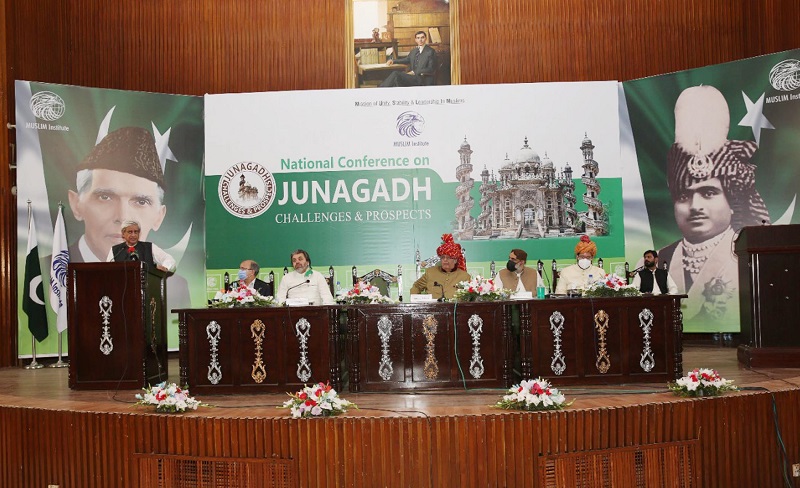 Syed Fakhar Imam said that Pakistan needs to persistently pursue its claim on Junagadh at all international forums. In this respect, a more cohesive and persistent policy is required.

Speakers established the narrative that nations that do not display their absolute resolve towards their legitimate right do not get respected in the comity of nations. Even their survival fell in jeopardy. This requires the mobilization of all national elements. We have to tell the world that we are a determined nation that will never abandon its legal, just, and rightful claims. Speakers regard in high esteem the courage and absolute resolve presented by the Nawab & Dewan of Junagadh state in carrying forward the case of Junagadh.

The Conference consisted of four academic sessions highlighting the legal status of the Junagadh issue, an inaugural session, and a concluding ceremony.

During the inaugural session, speakers presented an in-depth discussion on the history, accession to Pakistan, and the Indian illegal occupation of the Junagadh state.

Speakers make it very clear that India occupied Junagadh by use of force which was absolutely negated by the then Prime Minister Nawabzada Liaqat Ali Khan, and today we negate vehementaly all Indian claims on Junagadh.

They commended that the emergence of the issue both under domestic and international law has given leverage to the issue.

Speakers put in high esteem the methodology and manner adopted by the MUSLIM Institute to carry forward the issue.

They praised the academic maturity, serious academic work, and especially the professional manner in which the work has taken.

Speakers highlighted that Junagadh is a unique issue. Nawab of Junagadh continues to be the sovereign in exile. Junagadh’s Instrument of accession with the state of Pakistan has an absolute validity under the auspices of international law.

Speakers appreciated the government of Pakistan’s releasing of the new political map which has secured special importance in the eye of international law. Pakistan’s support for the cause of Junagadh is crucial. Pakistan honors all international treaties in letter and spirit and considers that honoring a treaty is part of honoring international law and the norms of the international community. India is not a country but a region and all the nations of this region have the right to independence.

Speakers suggested that more academic work on Junagadh needs to be done.