ISLAMABAD, Pakistan: The Journalist Community looks divided over the proposed Pakistan Media Development Authority (PMDA) as if a segment of media backed by the opposition parties is resorting to protest against it, some members of the same fraternity have also stepped outside to stand by the government over it.

On the eve of President Dr. Arif Alvi’s address to the Joint Session of the Parliament on Monday, the journalists from the platform of the Pakistan Federal Union of Journalist (PFUJ) staged a sit-in outside the Parliament House in Islamabad in a bid to register their strong protest against the proposed PMDA.

The journalists termed the PMDA bill as a “Black Law”, and demanded the federal government to withdraw it.

They said that the government under the pretext of the PMDA aimed at suppressing the press; however, they resolved that they would leave no stone unturned to resist the government’s move. 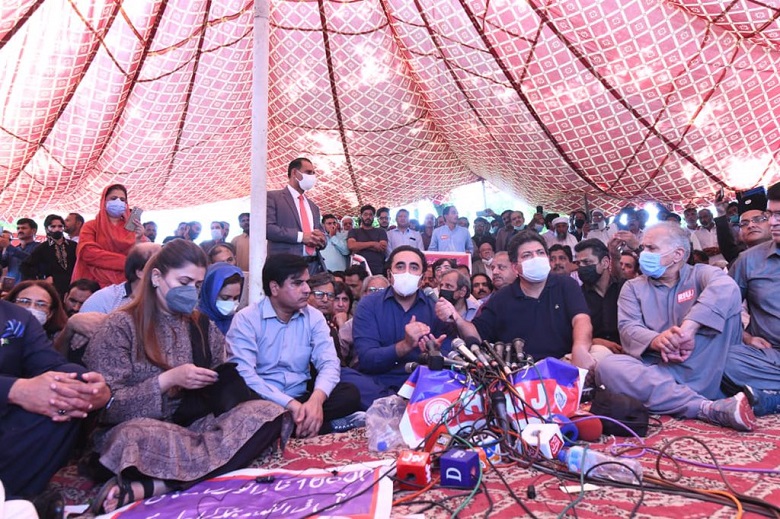 The leaders of mainstream political parties including Pakistan People’s Party (PPP), Pakistan Muslim League-Nawaz (PML-N), Jamiat Ulema-i-Islam-Fazl (JUI-F), and Jamaat-e-Islami (JI) also participated in the sit-in staged by the Journalist Community to express solidarity with them.

The Chairman PPP Bilawal Bhutto Zardari said that the draft of the PMDA is the same draft which the government wanted to impose as an Ordinance.

Bilawal said that if the government bulldozes it in the Parliament we will challenge it in Courts.

“We have doubts that this government will pass this law in a Joint Session of the Parliament But we will challenge it at every available forum,” he said.

The President PML-N Shahbaz Sharif and the JUI-F Chief Maulana Fazlur Rehman also participated in the journalists’ protest sit-in, and commended their resolve for the freedom of the press in the Country.

However, separately, a large number of journalists also gathered at D-Chowk in Islamabad to demonstrate support for the proposed PMDA law.

The journalists were carrying placards and raising slogans in support of the proposed legislation aimed at protecting journalists’ rights.

The President PFUJ Professional Mazhar Iqbal said that the proposed law will help check fake news and protect media workers’ rights. He said that no government in the past ever thought about the rights of journalists; and as now reforms are being introduced, media owners are opposing it.

Mazhar Iqbal said that a few journalists who are protesting against the proposed law are doing all this at the behest of the owners of their media organizations.

The Chairman Journalist Joint Action Committee Rana Imran Latif said that reforms are always opposed by a group of vested interests. He said that the journalists who are opposing the proposed legislation are working on the agenda of media organizations’ owners.