The Journalist Community has expressed solidarity with the veteran Journalist Nusrat Javed who last night claimed to have survived a murder attempt by Prime Minister Imran Khan.

Nusrat Javed wrote on his Twitter account last night that the prime minister tried to kill him but he survived.

However the senior journalist restrained himself to disclose the further details except mentioning the time. 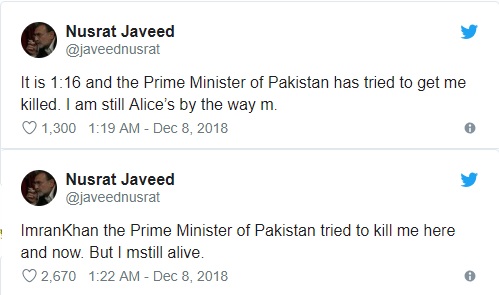 Meanwhile, fellows of his fraternity voiced serious concerns over murder attempt of Nusrat Javed and expressed solidarity with him. They also demanded a thorough investigation into the matter, and asked the government to ensure the safety of journalists in the Country.

This is outrageous. Will someone from the administration give us answers. @javeednusrat https://t.co/5uLeNHYl1E

We all are with you https://t.co/sneamd2cG7

The attempt to harm senior journalist @javeednusrat is highly condemnable and needs a probe at the highest level. The campaign to target journalists in #Pakistan is well orchestrated and reaching dangerous levels. #PressUnderAttack pic.twitter.com/NsejpEPyNm

Attack on veteran journalist @javeednusrat is highly condemnable. It must be investigated. Government must act to protect journalists and freedom of expression

Attack on @javednusrat Certainly matter of great concern. Must be investigated at highest level. But alleging that PM IK had ordered all this makes no sense until proven by hard facts.

Stay strong @javeednusrat prayers and best wishes your way, in solidarity with you..

Stay safe dear Nusrat Javed. The attackers know they are coward. In this age of technology, only a fool can rely on outdated methods of intimidation involving bullets. There are 1000 ways to silence you but this one is totally not feasible. We are with you @javeednusrat

But at the same time, Nusrat Javed also had to face a criticism in social media for his startling accusation against Prime Minister Imran Khan. The people bashed the journalist, saying that he might have leveled the allegation in an abnormal state of mind.

Recently, Nusrat Javed also became a victim among others of massive retrenchment in media, and his program ‘Bol Bol Pakistan’ was taken off the air by Dawn News.

Mati
Mati-Ullah is the Online Editor For DND. He is the real man to handle the team around the Country and get news from them and provide to you instantly.
Share
Facebook
Twitter
Pinterest
WhatsApp
Previous articleSenate Foreign Affairs Committee to organize public hearing on Kashmir issue
Next articleThree weeks long Pak-China Joint Military Exercise ‘Warrior –VI 2018’ begins