ISLAMABAD, Pakistan: The Journalist Community on Wednesday voiced series concerns over the attempt of kidnapping of senior journalist Taha Siddiqui, and demanded the authorities concerned to carry out a thorough investigation into the incident.

Earlier in the morning, Bureau Chief of World is One News Taha Siddiqui was on his way to the airport by a car to catch a flight when a group of people comprising 10 to 12 men made an attempt to abduct him with force in the jurisdiction of Koral Police Station. However, Taha Siddiqui managed to escape and reached the police station to report the incident. The journalist received injuries during the scuffle.

In a statement, the RIUJ also expressed serious concerns over the attempted kidnapping of senior journalist Taha Siddiqui, and said that it is already in contact with senior police officers for probing the issue and extending security to the journalist.

Expressing serious concerns over rising serious threats to the life and liberty of journalists in the twin cities of Rawalpindi and Islamabad, the RIUJ appealed to the Interior Minister Ahsan Iqbal to direct the concerned officials to investigate the incident of attempted kidnapping of a senior journalist.

The RIUJ vowed that the freedom of the press could not be suppressed through such actions. The union said that under the umbrella of the Pakistan Federal Union of Journalists (PFUJ), it stands determined to protect and defend all working journalists. 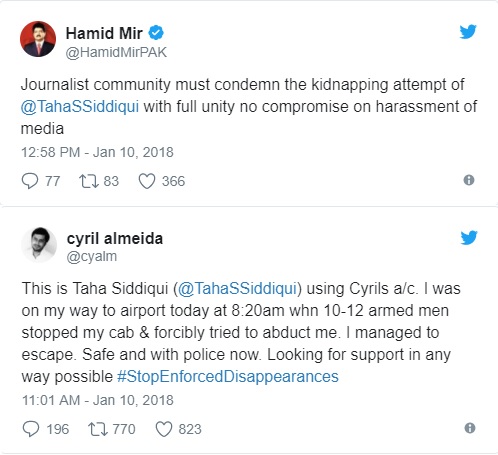 Meanwhile as per the directives of President RIUJ Mubarak Zeb Khan and President NPC Shakeel Anjum, a delegation of Islamabad Crime and Court Reporters Association headed by Zaman Mughal and Rana Kausar and also comprising Malik Najeeb, Bilal Afridi and Saghir Chaudhry reached the Office of SP Rural Mustafa Tanveer. The journalist Taha Chaudhry informed the SP Rural about his attempted kidnapping and filed an application to register the FIR.

Following his medical checkup at PIMS, Taha Siddiqui will also hold a press conference at NPC Islamabad wherein he will apprise the media as well about whatever happened to him in the morning.

Mati
Mati-Ullah is the Online Editor For DND. He is the real man to handle the team around the Country and get news from them and provide to you instantly.
Share
Facebook
Twitter
Pinterest
WhatsApp
Previous articlePakistan exported basmati rice worth $147.310 million
Next articleTwo killed as riot erupts in Kasur over rape, murder of minor girl