The Chairman briefed the Consul General about expanding activities of his Group in Pakistan, and underscored that the Group is planning to establish a Cheese processing factory in Pakistan.

The Consul General assured full support of the Pakistan government in setting-up of the factory. He maintained that Group’s current subsidiary Company, ANTHELA, refining Himalaya Rock Salt in Pakistan was a very profitable venture and the salt extricated and refined from Pakistan was being exported to Japan, the US, and Hong Kong.

It may be recalled that ANTHELA signed an agreement with Pakistan Mineral Development Corporation (PMDC) according to which ANTHELA has the exclusive priority to select 60,000 tonnes of premium rock salt out of PMDC’s annual production in total of 1.6 million tonnes of rock salt. 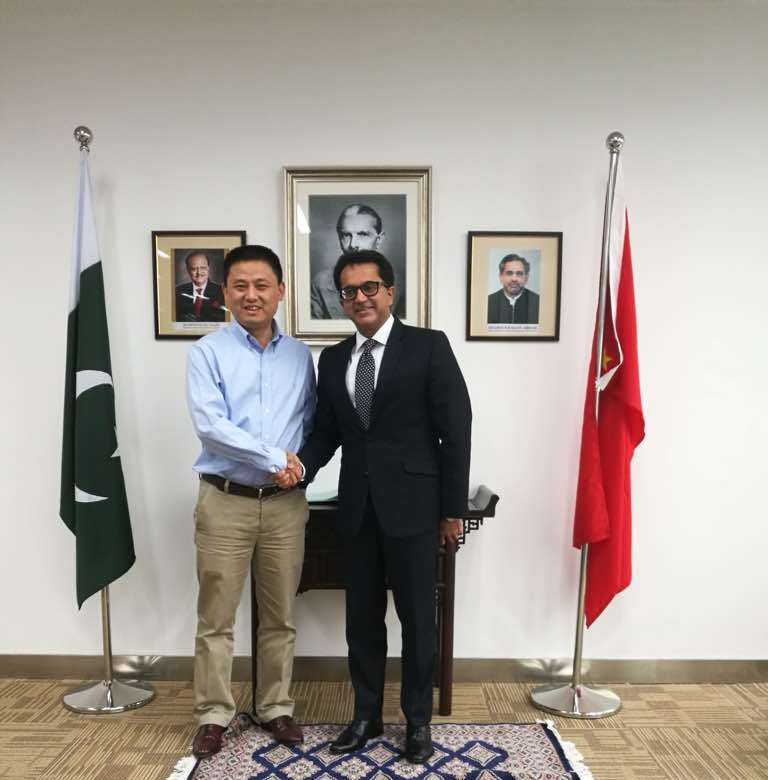 Bai Shun maintained that Pakistan had very good infrastructure and presented enormous opportunities to the Chinese entrepreneurs. He strongly supported start of direct flights between Lahore and Chengdu so that the Chinese businessmen could easily and timely travel to Pakistan and set-up their businesses. In the absence of direct flights or land routes, a lot of business opportunities were being lost out, he emphasized.

The Chairman of the Jointt Holdings Group also stressed that Pakistan government must devise a clear plan to incentivize Chinese industry to relocate its industrial operations in Pakistan as Pakistan presented a lot of opportunities for such projects.

The Consul General maintained that it was already a key priority area for the government.

The Consul General briefed Bai Shun on the changing economic landscape of Pakistan and stated that Pakistan was on the cusp of a new growth trajectory with all the right ingredients set to take Pakistan off economically.

Mati
Mati-Ullah is the Online Editor For DND. He is the real man to handle the team around the Country and get news from them and provide to you instantly.
Share
Facebook
Twitter
Pinterest
WhatsApp
Previous articleJourney to Mysticism goes through Uzbekistan
Next articlePak-Nepal ties offer big scope for dynamic partnership: PM Khaqan